One of the things from Don Jacoby’s collection that I liked the best was this Carter’s pencil, complete with its rounded celluloid case.  It didn’t bother me that the pen was missing: 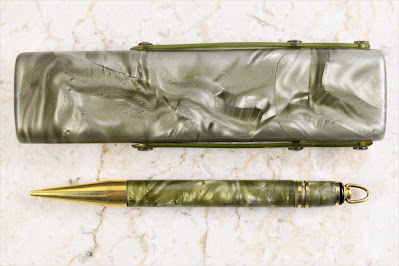 The Carter imprint is easy to miss on these: 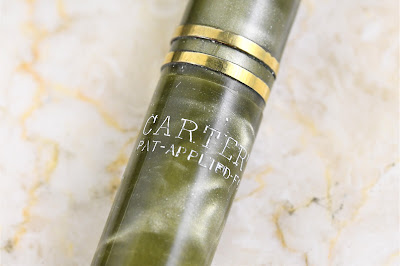 Later Carter pencils are unmarked, like this next one, and it took me some time to attribute these to Carter (see Volume 5, page 164): 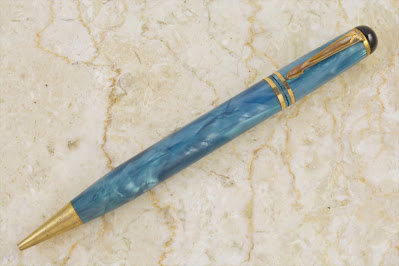 I didn’t remember seeing a Carter that matched its carrying case so closely . . . until I arrived back at the museum and went to file it away.  I’ve posted so many articles here that I had forgotten that I wrote about a similar set (Volume 5, page 263): 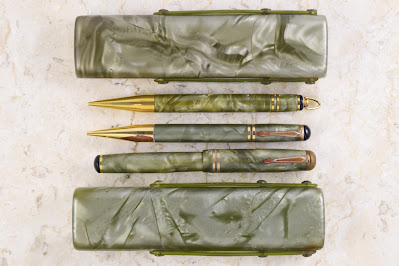 The pencil from Don’s collection is, I think, a little bit earlier – a thought I come by honestly, after Rob Bader sold me a copy of Carter’s “Catalog 11" at the DC show a couple years ago: 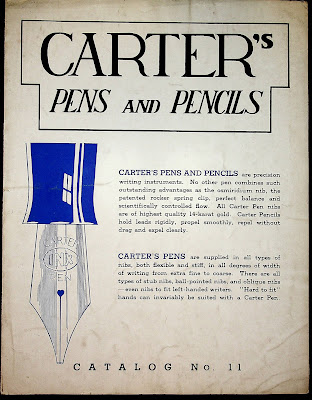 This catalog is from 1931 or so, near the end of Carter’s run as a pen and pencil manufacturer.  I gave a copy to Ross McKinney, who used it as the backbone for his article on later Carters for The Pennant recently since it redifines what we thought we knew about Carter’s later years in its short four pages.  On page 2, we see the pencils with short noses and that later clip like the blue one from Volume 5, and the longer-tip pencils are discontinued: 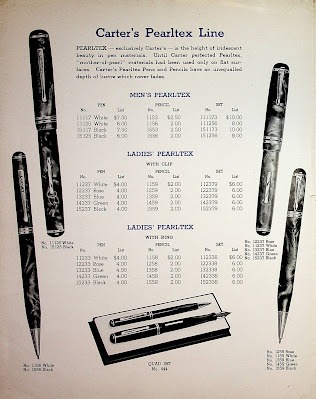 Note also the pencils on the left; the venerable DeWitt-LaFrance clip has been abandoned in favor of a more streamlined version on the “Pearltex” line.  They are also shown on the following page of “Coralite” pens and pencils: 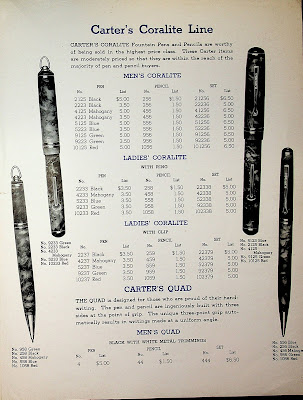 I’ve got a few of these later Carter pencils in the collection: 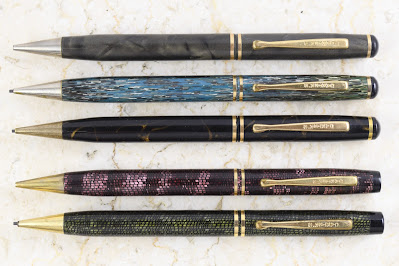 I suppose the black with brown swirls might pass for “Mahogany” as described in the catalog.  There’s no gray listed, and that funky blue striated plastic?  I can’t believe they would just call that plain ol’ “Blue.”

Then there’s those bottom two pencils: back in the days before Rob parted with that Carter catalog, I called that pattern “snakeskin.”  However, the last page of Catalog No. 11 refers to them as the “Mosaic Line”: 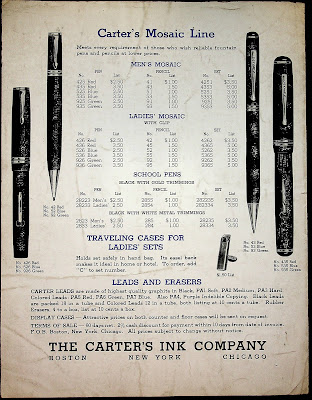 Although Catalog Number 11 shows Coralite, Pearltex and Mosaic pens and pencils all in the same trim configuration, note that the two Mosaic examples I have are a little different: 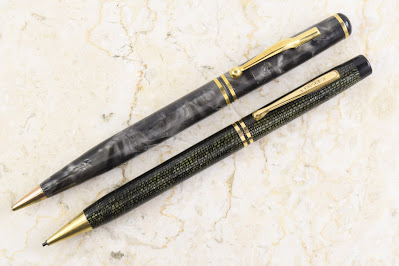 They are smaller, the nose is longer, and the top trim band is omitted in favor of a plain, black top on my Mosaic pencils. 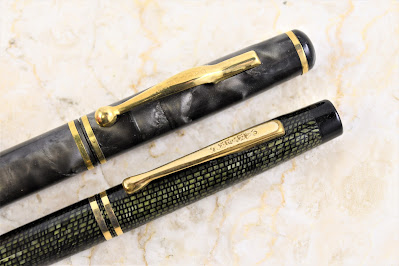 They aren’t like any other Carter, but they do resemble something else: 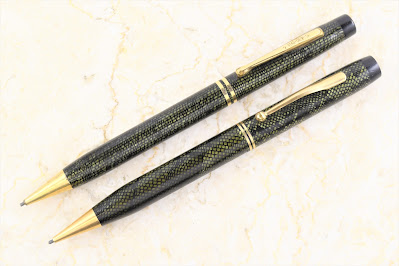 That other pencil is marked “The Geo. Innes Co.” and it was made by the Seth Crocker Pen Company (see Volume 5, page 159), which made pencils for the Innes store, as it also did for Macy’s (Volume 5, page 161).

Let’s throw something else in the mix: the Seth Crocker pencils were protected by a design patent.  Seth Chilton Crocker applied for the patent on July 8, 1934, and the patent was granted as number Des. 94,118 on December 25, 1934: 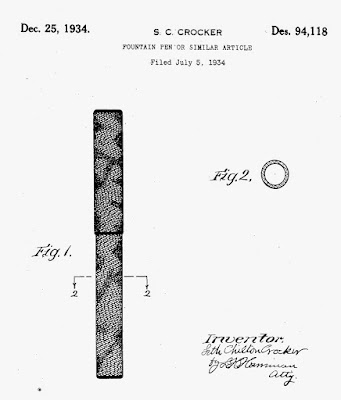 I titled this article “The Inconvenient Question” because every time that I ask it, everybody just looks at me like I have lobsters coming out of my ears and goes back to talking among themselves.  The question is this: if the Seth Crocker pencils were protected by a design patent, and these Carter Mosaic pencils are exactly like a Seth Crocker but with the grid running straight instead of on the diagonal . . . is there any connection between the Carter and the Seth Crocker? 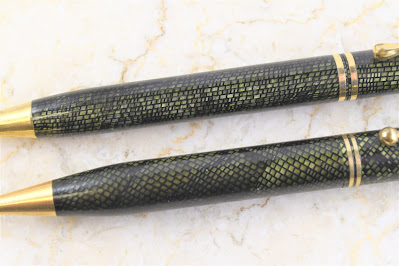 I’ve attributed the Carter Catalog Number 11 to 1931, but there’s no dates inside it . . . and it might be later: after all, the only newspaper advertisement I found which shows anything like what’s in Catalog Number 11 appeared in the Asbury Park (New Jersey) Press on December 22, 1933: 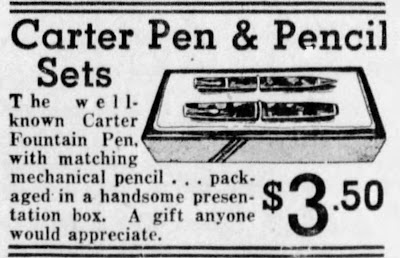 Perhaps these were closeouts, distributed after Carter discontinued its operations . . . after all, like so many other companies that perished during the Depression, Carter’s departure from the industry wasn’t announced.  Perhaps Carter then sold off equipment to Seth Chilton Crocker, who then took out a design patent.

The only thing that I’m certain about is that Carter’s Mosaic line and Seth Crocker’s patented design could not coexist without some agreement.