I do appreciate the Parker 75, even though they were made later than the pencils I usually pursue.  The late Lee Chait and Lih-Tah Wong are the real professionals on the subject, and Lih-Tah’s website, Parker75.com, includes a link to his landmark book on the subject.

The pens – at least in more common patterns – are still readily available, as are the ballpoints.  The pencils . . . not so much.  Over the years, I’ve kept a ballpoint in my collection, just as a representative sample of the “cisele” sterling-barreled writing instruments with that black grid. 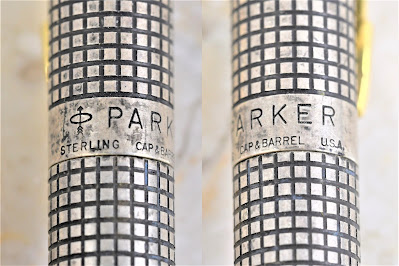 It grated on my nerves a little to have an interloping ballpoint mixed into my pencil collection.  While I finally found a couple examples of the twist pencils, I never got around to moving that pesky ballpoint onto a new home.  I’m glad now that I didn’t, after something turned up in Don Jacoby’s collection: 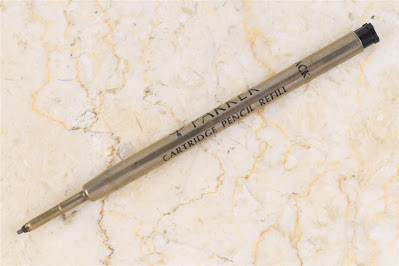 I knew this, and I should have remembered this.  Parker came up with an ingenious but short-lived innovation, a lead cartridge which could convert any Parker ballpoint into a cap-actuated repeating pencil: 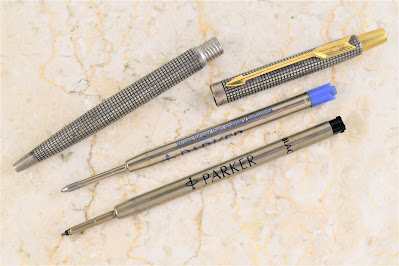 Ingenious, in that it eliminated a lot of the tooling required to produce separate barrels and mechanisms for a dedicated pencil.  Not so ingenious, however, in its marketing: here’s an advertisement in the December 18, 1969 issue of the Minneapolis Star Tribune, from Donaldson’s store:

The Parker International Classic (as it was called by that time) “now have the revolutionary Parker lead cartridge that ends messy lead handling,” and they were offered at the same price as the ballpoint.

Add to that the fact that these little lead cartridges were actually tiny self-contained repeating pencils themselves - they operate just like a regular repeating pencil whether or not they are installed in a barrel.  That would have made the refills every bit as expensive to make (and therefore, to buy) as a pencil – perhaps even more so, given how small they were.  Then there was the problem with the leads:  many of these cartridges were filled with 1.o millimeter leads – that may have been out of necessity given the small tolerances required, but more likely is that it was an attempt to discourage refilling the cartridges with readily available 1.1mm or .9mm leads, which would further diminish Parker’s profits. Here you can see that the Parker lead cartridge has leads a bit wider than the .9mm used in regular twist pencils . . . but not a full 1.1mm. 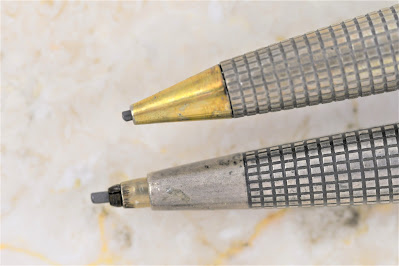 While 1.0 millimeter leads were commonly used in England, they were not readily available after Mordan’s factory was bombed during World War II and was never rebuilt.  My Legendary Lead Company has a substantial quantity, which were made by Panda apparently for export after World War II, but these are in the standard 1 3/8" lengths . . . who knows, maybe they were made for Parker, maybe for someone else.

Parker must have learned in fairly short order that the introduction of the lead cartridge was a misstep, with the company selling half as many writing instruments and reduced demand for costly refills.  Parker must also have learned, as many other manufacturers did, that introducing a weird lead that only works in their pencils was a huge misstep – the only manufacturer that really pulled that off was Charles Keeran, whose 1.1mm lead became the standard only after the Eversharp caught on like wildfire.

At the end of the day, I’m happy to have a trio of Parker 75, or International pencils in sterling cisele: a regular twist pencil, a (gulp) desk pencil and a former ballpoint now made right in my pencil world: 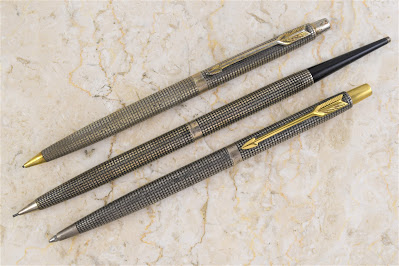 Yep, it measures about a tenth of a millimeter larger. I emptied a cartridge and inserted a length of .9mm lead. The clutch seems to hold the .9mm just fine, but it advances way too much with each push on the button and the lead falls out if you turn the pencil point down and hold the button down. Never liked the lack of an eraser.