In the ten years since The Catalogue was published, you would think I might have learned more about the Klagges-Essig Pencil Corporation of Brooklyn, New York.  While I have learned a couple of tantalizing little tidbits, I haven’t yet pieced together enough to tell you the whole story, so it’s time to lay out everything I do know in the hopes that someone will stumble across this article and have some additional information to fill in the blanks.

The inspiration to send out this cry for help comes from Ben Mawhorter, who had stumbled across an example of the pencil in a beautiful black and bronze celluloid. 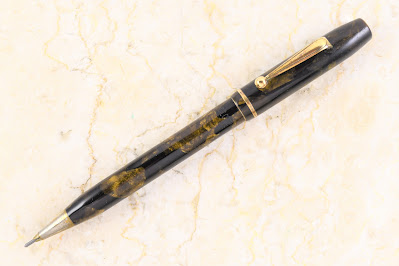 We both knew I was buying it, so he was holding it for me until we saw each other at the Raleigh Show last June.  That didn’t happen.  No worries, we thought . . . see you in Ohio in November.

Yeah, that didn’t happen either.

We finally gave up over the winter and came to terms remotely, in a sterile transaction that felt a bit hollow in comparison to our usual in-person dealings amongst friends at those things we used to call pen shows.

Ben’s Klagges-Essig joins the only other complete example I’ve found (the one shown in The Catalogue), and another one that turned up missing its clip in that same grey plastic: 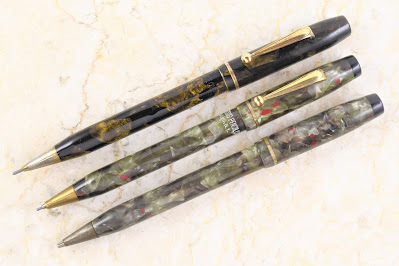 Ben’s example is very clean with a nice, crisp imprint; unfortunately, it doesn’t show up very well in pictures, given the colors in the barrel material: 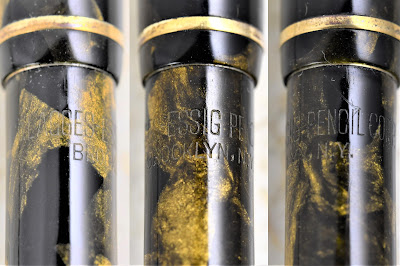 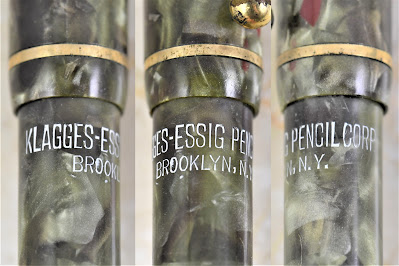 You would think this would be enough to go on, but I’ve never been able to find anything.  The 1933 and 1940 Brooklyn directories don’t contain any listings for a person or company with the name “Klagges”; there are a couple people named “Klages,” but none appear to have anything to do with pencils.  There are a few people named “Essig” in the 1939 directory, but by that time occupations were no longer included with the listings: 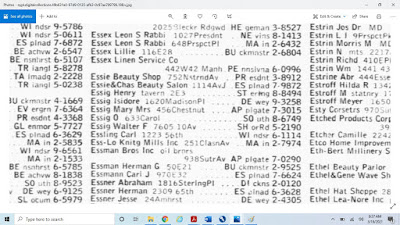 The best and most tantalizing clue I’ve found comes from American Writing Instrument Patents Vol. 2: 1911-1945, which includes a handful of patents issued to two people named Klagges.  One, Elsie Klagges, was from Glendale, New York when she received patent number 1,755,326 on April 22, 1930 for a screw drive pencil.  Since the Klagges-Essig is a repeater, and this was the only patent she received, all this does is put her in the same state, showing interest in designing pencils.

Elsie Fleisher was born in 1896 and died in 1984.  She lived in New York for most of her life, but by 1940 she had relocated to New Jersey.   One other detail, though, perked me up: she became Mrs. Klagges when she married a man named Henry C. Klagges.

Henry is the other Klagges listed in American Writing Instrument Patents Vol. 2: 1911-1945.  His residence in all five of his patents is identified as Collingswood, New Jersey, and all five were assigned to the Esterbrook Steel Pen Manufacturing Company.  Four of the five were various improvements to Esterbrook’s fountain pens.

The first one he received, though, was for – you guessed it – a repeating pencil: 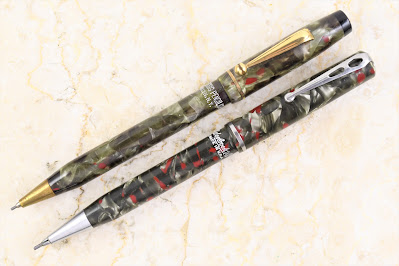 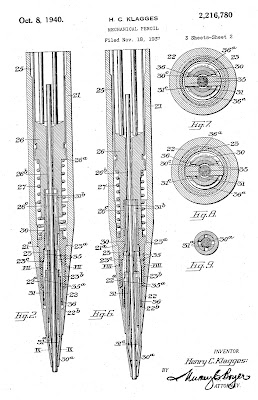 The Esterbrook connection is intriguing.  The Klagges-Essig does bear some passing resemblance to contemporary Esterbrook repeaters:

Even the plastic shown here is close – but not quite.

The Klagges-Essig pencils I have found lack any indication that there were any patent applications pending for that particular design, so I’m left to speculate on what might have happened.  Perhaps, in the mid-1930s, Mr. and/or Mrs. Klagges cooked up a great idea for a new repeating pencil design, which was different enough from the Esterbrook design (derived from Robert Ingersoll’s old patents).

Perhaps Esterbrook got wind of the pencil after they set up a Klagges-Essig Pencil Corporation in Brooklyn, and perhaps Esterbrook decided it made more sense to buy out the Klagges clan and bring them aboard at Esterbrook, so they hired Henry Klagges, who closed his pencil company, moved to New Jersey and lived happily ever after.

Perhaps is the best I have.

Email ThisBlogThis!Share to TwitterShare to FacebookShare to Pinterest
Labels: Klagges-Essig