As the writing instrument industry developed in the late teens, offering pencils to accompany fountain pens became a point of parity rather than a point of distinction.  Having pencils in the product lineup was keeping up with the competition rather that being a step ahead.

Some companies developed their own unique pencil designs, while others established relationships with others to supply them.  While some companies had one supplier, a pesky few pen companies seemed to order from whomever was running a special on that particular Tuesday.

Enter the Edison Pen Company, and the pencil which leads me to today’s story: 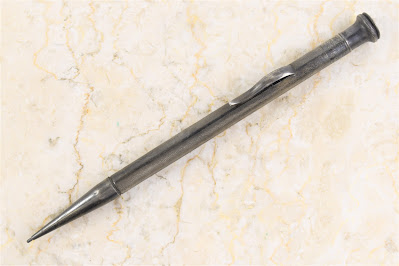 This one has an outstanding Edison imprint: 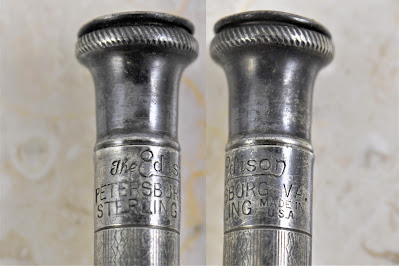 That unique logo was granted trademark registration on an application by George S. Bernard, President of the Edison Pen Company, filed on May 3, 1920 and granted as number 137,993 on December 14, 1920.  Bernard wasn’t in much of a hurry to file the mark: he claimed to have first used it in April, 1913 on “fountain-pens and pen-points”: 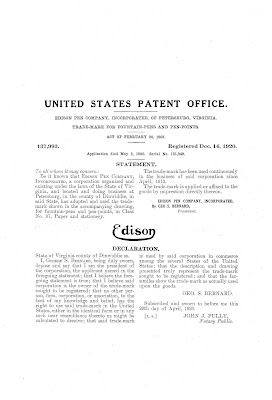 I’ve known about these metal Edison pencils, but this is the first time I’ve run across one.  It is a dead ringer for a Hutcheon “Finerpointe”: 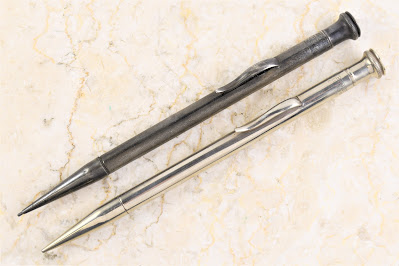 I commented on the notion that Hutcheon made pencils for the Edison Pen Company a few years ago, in connection with a discussion about the “Ever-Ready” brand (see Volume 2, page 68).  On page 196 in Schneider and Fischler’s The Book of Fountain Pens and Pencils, four early advertising blotters from Edison illustrate Hutcheon-made Edison metal pencils: 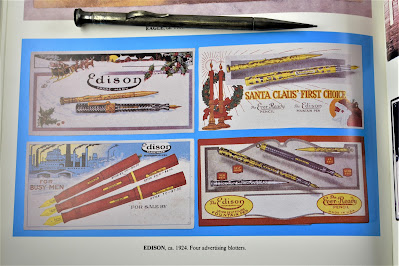 The book dates these blotters to around 1924, and now that I’ve looked into it a little further I think that is a little late – and “a little late” might as well be the theme of the article.  Note that the lower right hand blotter indicates that Edison pens were accompanied by Ever-Ready pencils: 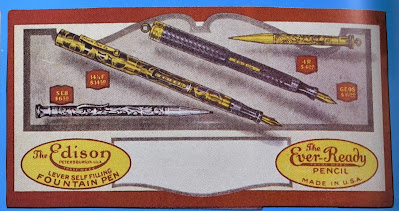 All of the other pencils I’ve found that were supplied by Hutcheon to the Edison Pen Company are marked with that Ever-Ready imprint (the bottom one shown is missing the top): 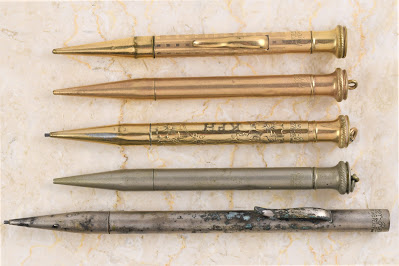 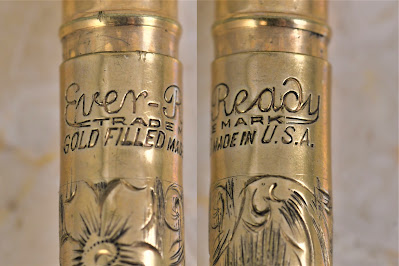 I concluded in Volume 2 that the Ever-Ready name had started with the Edison Pen Company, and then was handed off to the American News Corporation like a football.  Now I know that wasn’t the case – there were two footballs.

I was so close to having things right in Volume 2.  I’d noted that the “Ever-Ready” name appeared to be in use simultaneously by the American News Corporation and the Edison Pen Company.  The A.N.C. connection came from an advertisement in The American Stationer on August 3, 1922 (see Volume 2, page 66): 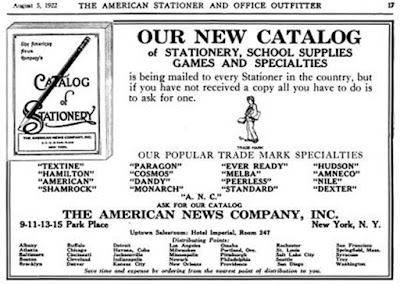 Meanwhile, the name was attributed to The Edison Pen Company in the 1922 edition of Trade-Marks of the Jewelry and Kindred Trades: 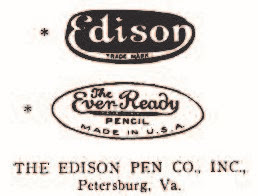 I was only missing one piece – or rather the absence of one piece – when I wrote that article in 2013.  Note that both the Edison and Ever-Ready listings in Trade-Marks of the Jewelry and Kindred Trades have an asterisk next to them; as the footnote at the bottom of each page indicates, that asterisk designates trademarks which were “filed for registration” with the Patent Office.

What I didn’t know in 2013 was whether that was accurate.  It wasn’t until 2017, when I wrote American Writing Instrument Trademarks 1870-1953, that a comprehensive list of trademarks granted registration had been compiled.  The wording in Trade-Marks of the Jewelry and Kindred Trades is clumsy: “filed for registration” doesn’t really answer the question, since trademark registration is a three-step process.

First, after an application for registration is filed, patent examiners look through registered marks to be sure there is no obvious conflict - if, for example, someone other than the Parker Pen Company tried to register the word “Parker” on writing instruments, no matter how different the letters appear from the marks Parker had registered, the application would be rejected out of hand.

If the application passes that initial review, the second step is to publish the mark for opposition in The Official Gazette and allow anyone else who might be using the same or a similar mark time to object.  After there is no objection or if objections are received but overruled, the mark is granted registration, and notice that the mark has been registered also appears in The Official Gazette.

Only those trademarks which passed that third step are included in the book.  Fortunately, I saved all of my research notes, including the annual indices of marks which were published for opposition in The Official Gazette.  The Edison Pen Company did not file an application to register its Ever-Ready mark until May 5, 1922, claiming to have first used the name on March 1, 1921.  The mark was published in The Official Gazette on February 13, 1923. 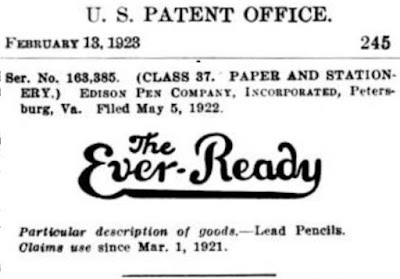 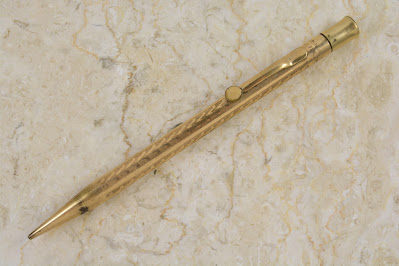 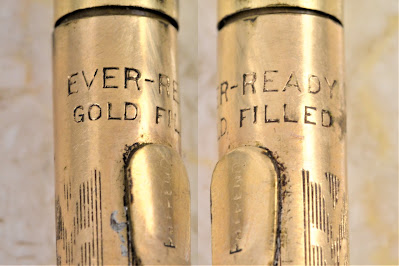 This also explains why these Eclipse-made pencils shown in Volume 5, page 294 bear an Ever-Ready imprint which is similar to Edison’s, but not identical - note the lack of an underline connecting the first and last letters. 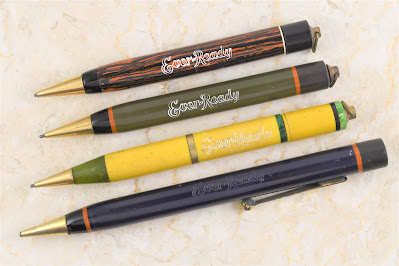 That distinctive logo evolved separate and apart from Edison . . . but although American News Company apparently prevailed in its efforts to prevent registration of the mark by Edison, the company never took steps to register it, either.

The scuffle over the name might explain why my Hutcheon-made Edison pencil isn’t marked “Ever-Ready.” Perhaps it was made before Edison began using the name in March, 1921, or perhaps it was made in 1923 after registration of the mark was denied.

Now to circle back to something I said a few minutes ago – that I know that Edison blotter was printed earlier than 1924.  By 1924, Edison was no longer souring pencils from Hutcheon: 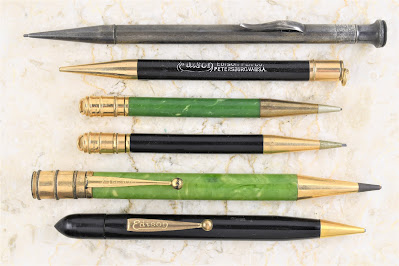 All of these are marked Edison rather than Ever-Ready, and all but the top and bottom examples were made by the Rex Manufacturing Company, starting with the 1924 McNary patent pencil at the top.

As for that bottom example, it is a generic, nose-drive pencil.  I don’t know who made it, and there are dozens of suspects.  Another rainy day project . . .

Email ThisBlogThis!Share to TwitterShare to FacebookShare to Pinterest
Labels: Edison, Ever Ready