Rounding Up the Victorians

The collecting universe seems to have a cyclical rhythm.  When I piddle through online auctions, my search is usually for “pencils” rather than for any particular breed or vintage – yet from unrelated sellers, like pencils of similar feathers will flock together to my doorstep.

The image at the beginning of yesterday’s article grouped together a cluster of Victorians that landed here within a fairly short time, from random sources. 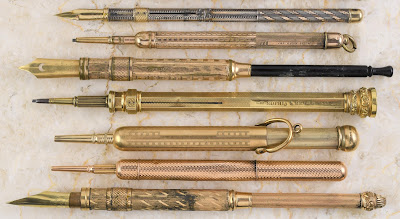 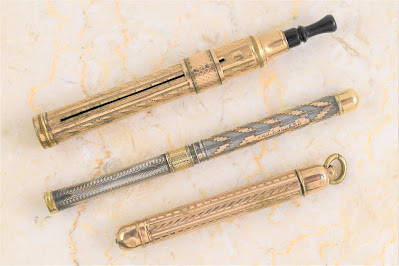 Represented here from top are a dip pen, a combination dip pen and pencil (based, incidentally, on John Mabie’s October 3, 1854 patent discussed yesterday), and a magic pencil. 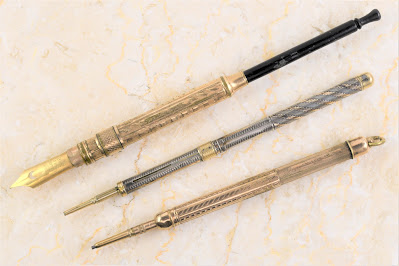 Still, the holder is marked Holland, and as a proud Ohioan, it’s nice to see the Cincinnati maker’s mark: 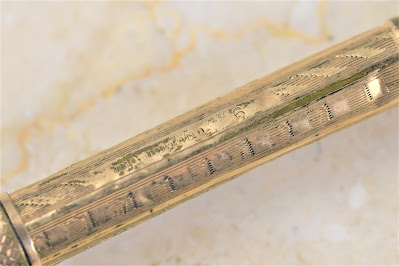 And then there’s that nib . . . a big, gorgeous, and tougher-to-find Number 6 “horseshoe” nib 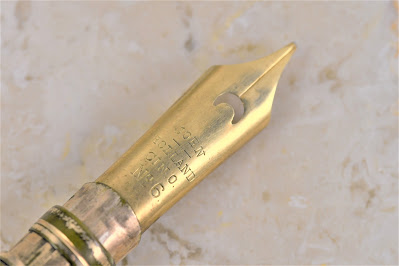 The combo is a tiny little thing, with a much smaller Holland Number 2 nib that needs a little bit of work: 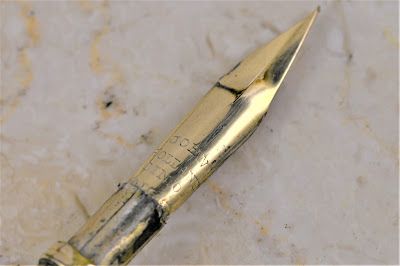 What really attracted me to this one is the barrel composition: sterling and rose gold on the barrel, with yellow gold ends and slider ring – two-tone Victorians you’ll find from time to time . . . but tri-tone? 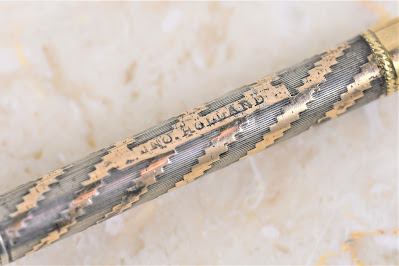 That third Holland looks like an ordinary magic pencil, but there’s something special about it: 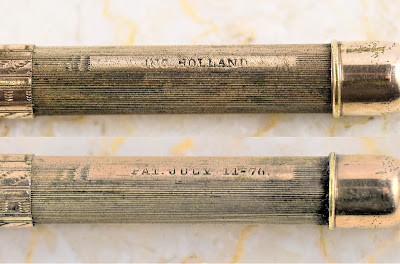 The extender reads “Jno. Holland” on one side, and “Pat. Jul 11 - 76" on the other – and I didn’t have a writing instrument with that patent date in my collection.  It’s listed in American Writing Instrument Patents 1799-1910: patent number 179,743 was applied for by Edward Tyrell of Cincinnati, Ohio on June 8, 1876.  It was issued with lightning speed in just over a month, and assigned to John Holland: 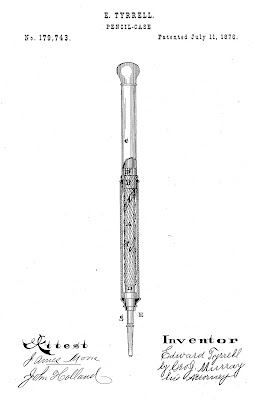 Next to find its way to me is this large slider pencil, sporting handsome engraving reading “Sophia S. Brown 1853"; 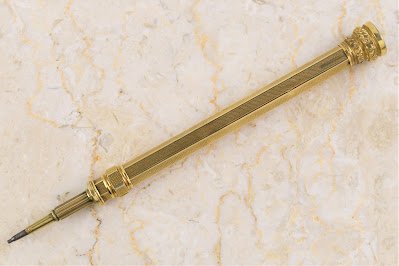 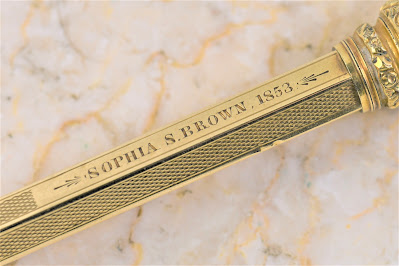 Lettering on the other side of the barrel is much smaller but speaks louder, at least to me: 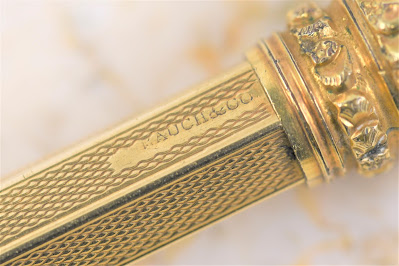 I described it as a “large” slider pencil, and you might not think it is until I tell you it’s a Rauch & Co.  By Rauch standards, it’s a behemoth: 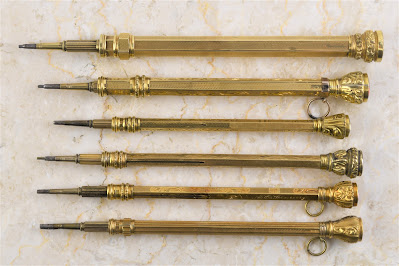 Next up is one of those large “convertible” pencils – you can either extract the pencil leaving the case hooked to a watch chain or use it in the case: 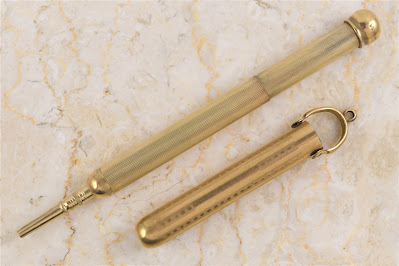 It resembles other pencils I’ve written about here before: 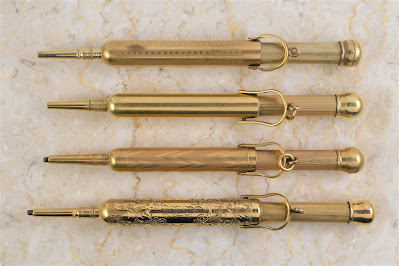 Those other three are a Simmons, a Cross (AXT, for A.T. Cross), and a Mabie Todd: 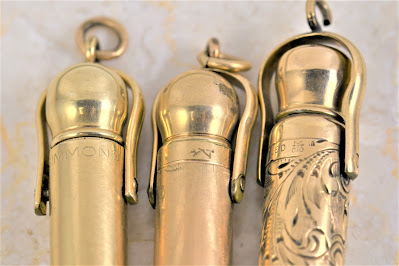 This one, however, is marked U.S. Fountain Pen Company, predecessor firm to the U.S. Victor Pen Company: 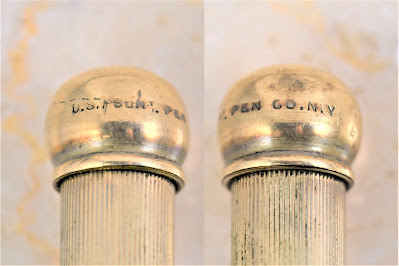 I’m not sure where to file this next one away in my collection.  It has two interesting tells: that distinctive rose gold, and the odd placement of the joint for the twist mechanism, farther towards the end rather than right in the middle: 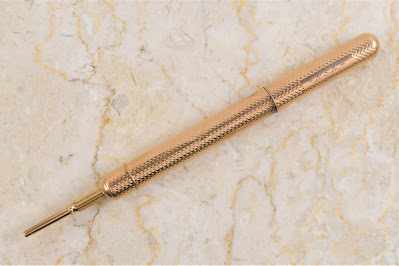 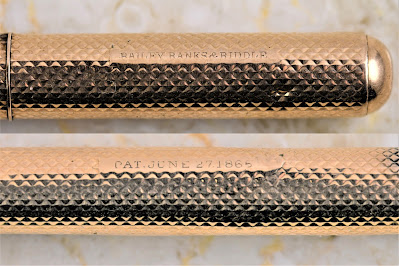 I recently wrote about the history of the Philadelphia jewelry firm of Bailey, Banks & Biddle (see Volume 6, page 119).  I’ve also written about the man who received that 1865 patent, a little-known inventor named Frederick W. Cox (Volume 4, page 175).   My only other example of the Cox patent is in black hard rubber, and may have been made by Mabie Todd: 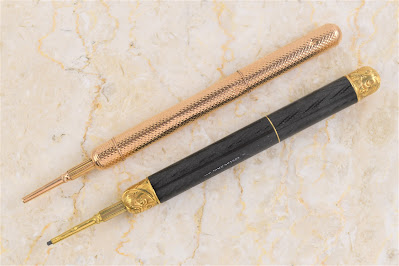 After much agonizing, I decided the two Cox pencils go together . . . and I’m noting that here mostly to remind myself where on earth I put that other Bailey, Banks & Biddle!

Finally, this last one was described in an online auction, as not in working order.  I was feeling a little frisky, so I threw in a nominal bid thinking it might be fun seeing if I could do anything with it. 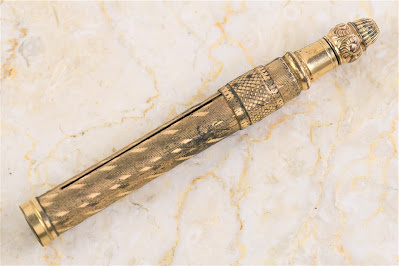 I was pleasantly surprised when it arrived to find that the pencil was operating just fine – that was half the battle, anyway . . . 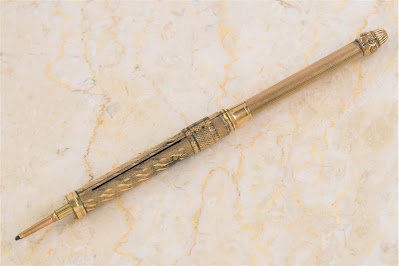 The nib slider, however, wouldn’t budge at all.  I used the old lighter fluid trick to see if that might loosen things up a bit, and it did – I got it to move forward just far enough that the tip of a nib emerged from the end, and I was able to pull it out: a cheap steel fountain pen nib that had nothing to do with a Victorian (the Holland nib with the horseshoe cutout earlier was an exception -- Victorian dip pen nibs typically don't have breather holes).

With the nib out, I tried the slider again – no more progress, so I hit it with more lighter fluid, then a little dab of oil in the slit, and the tip of another cheap steel nib peeked out. 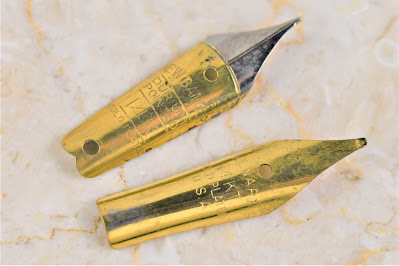 Good Lord . . . how many clowns were going to pop out of this car?  With the second nib extracted, I got my answer as the slider freed up at last.  There were three nibs in this one, and the third was a whopper: 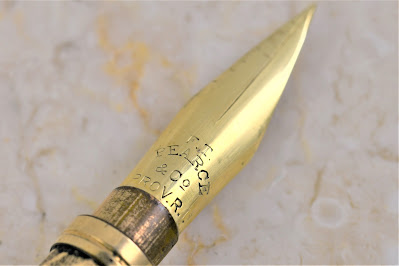 Miraculously, the original F.T. Pearce & Co. nib was undamaged by all the junk that had been shoved on top of it.  Best of all, I didn’t have a Pearce nib in my collection – the closest thing I have is an interesting Pearce & Hoagland from Frank T. Pearce’s earlier partnership (Volume 3, page 3).
Posted by Jon Veley at 3:45 AM