Poor Janet was overjoyed when I gave up collecting bottles to take up pens and pencils, thinking they would take up so much less space.  Of course, I never had anywhere near 15,000 or more bottles in my collection, so we’ll never have a real apples to apples comparison on that thought . . . let’s just say Janet is less enthusiastic about my twenty-year obsession with these things than she was when everything fit comfortably in one printers’ cabinet with room to spare.

These days, as my rationed space for hobby activities bulges to the point of overflowing, I’m very selective about taking in anything bigger than a pen or pencil.  There are some things, though, that I can’t resist buying even when I know I might already have one, like those great, oversized repeating pencils made by Samuel Kanner between 1926 and the Depression: 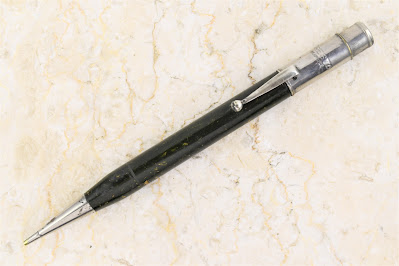 This one, like so many others in my collection, is marked simply “Presto / Pat. Appd. For”: 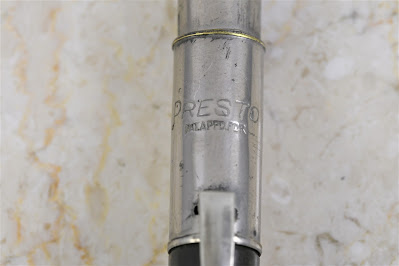 When it arrived, I took it down to put it with the others, knowing it would likely be a duplicate, but it wasn’t.  When I compared it to my other chrome-plated examples, I found that four other times I’ve done this, buying Prestos just for the heck of it, and no two are alike.  There are faceted and round barrels, matching bakelite buttons and metal ones, and some of the caps fit over the top of the pencil rather than inside it: 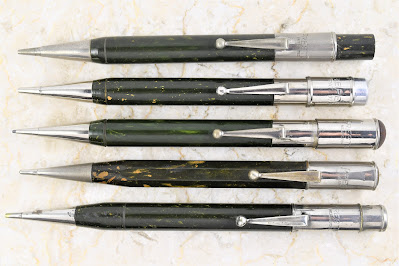 I did have one other Presto in an identical configuration, but it has gold filled trim. 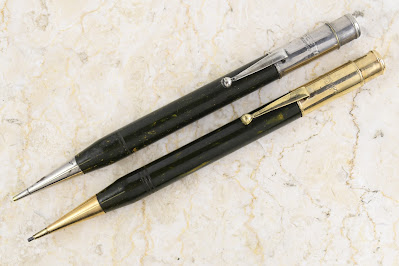 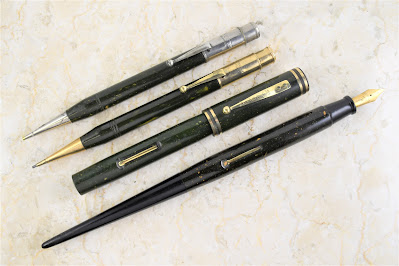 That desk pen is just mammoth, but being the Presto freak that I am, I couldn’t turn it away.  It didn’t fit in the slots alongside my other Prestos, but it lounges comfortably nearby, like that extra relative at Thanksgiving dinner stuck at the kid’s table trying to eat in a dignified manner with knees to chest.

That desk pen leads me to my encounter with Ben Mawhorter, who was supposed to meet me at a couple canceled pen shows to show me another Presto desk pen he had found, with a base and lamp.  That gave me pause . . . where would I find space for it?  Never mind . . . I bought it, sight unseen.  You’ll like it, Ben reassured me.  He was right: 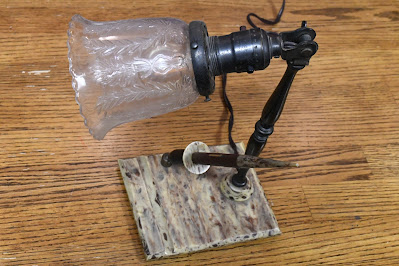 I like the industrial look to that lamp, although with that articulating arm, I’m not sure whether it should be set like this or held high, like the Presto version of the Statue of Liberty: 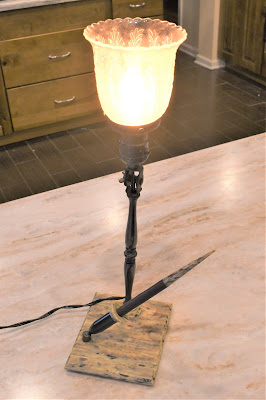 At least that might save a little bit of space, I thought.  The pen was slightly less than I hoped for, though.  I do like the butterscotch celluloid taper, which matches the base.  Presto pens and pencils had barrels made of bakelite, and it’s unusual to find this mix of materials: 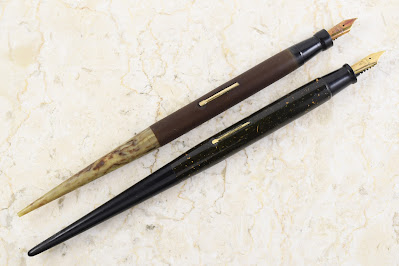 However, it’s missing the “Presto” logo on the lever, like my other one has: 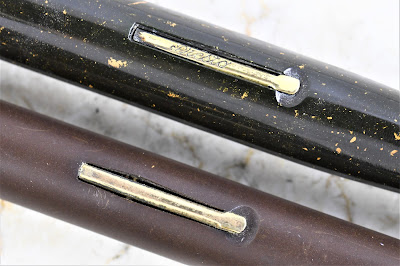 The lever itself and the way it is cut into the barrel are just what I would expect to see.  I’ll buy that it is a Presto, even though neither the base nor the pen is marked at all.  It is fitted with a Presto nib - it looks smaller than the one I already had, but they are both marked size 8.  It might just be crammed down farther inside the section, which is just a little bit different. 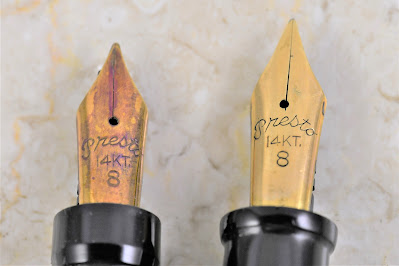 Even though the nib is all that ties this desk set to Presto, I’m convinced it is.  It might have been made near the end of the run, when brand marketing wasn’t as important as getting things put together and out the door.

So great – now to find space in a crowded room for something that, strictly speaking, doesn’t fit in with the collection.  Even the kid’s table isn’t big enough, so time to rearrange things.  After shifting things around, I did find the perfect place for it: 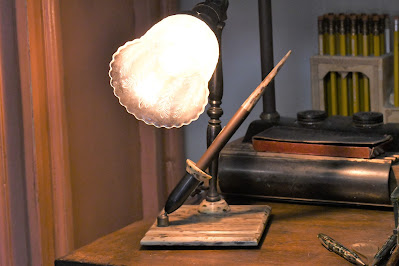 On the top of that first printers’ cabinet.
Posted by Jon Veley at 3:45 AM

Email ThisBlogThis!Share to TwitterShare to FacebookShare to Pinterest
Labels: Presto