I recently posted this image of several new additions to the Victorian wing of the museum: 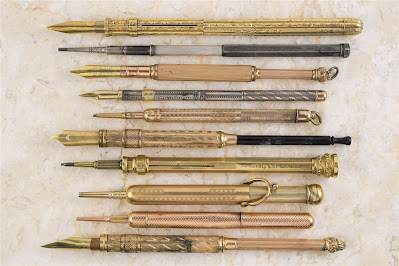 The top example was a steal in an online auction, after nobody noticed it was probably solid gold, but I found it more amazing that nobody else seemed to appreciate how gorgeous it is, regardless of the metal content.  After it arrived I found that I had one already . . . well, one almost just like it: 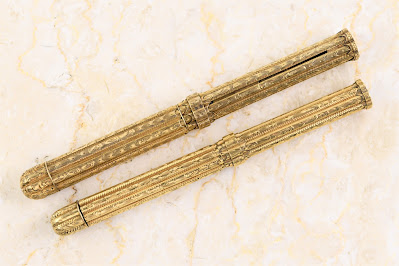 The new one is the smaller of the two: 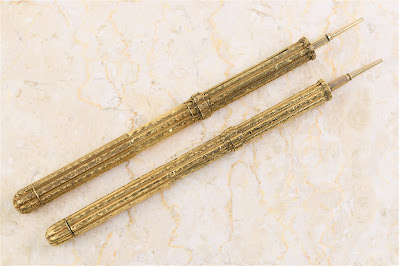 Both have Mabie Todd nibs - the larger one is a number 4, while the new addition is a number 3: 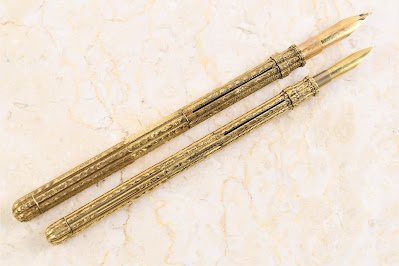 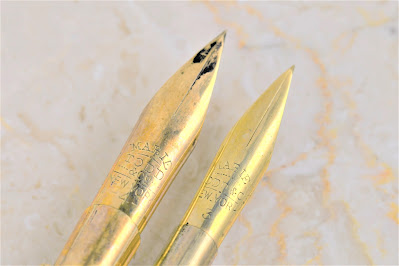 It is only on the inner tube that the Mabie Todd name appears - the number 4 has the typical “Mabie’s Patent Oct. 3 1854' imprint; the number 3 reads simply “Mabie’s Patent,” and I’m not sure why the date is omitted; perhaps the patent had not yet been issued, since there’s room enough to include it: 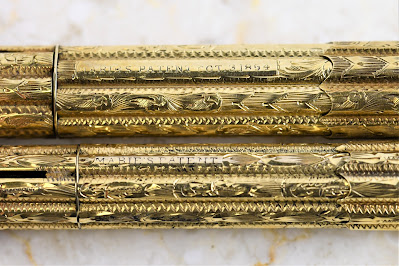 John Mabie’s October 3, 1854 patent is one of the seminal patents in American writing history, and it’s probably the most common date you will find on Victorian writing instruments, both with or without the extending holder or the nib slider.  The reference is to patent number 11,762: 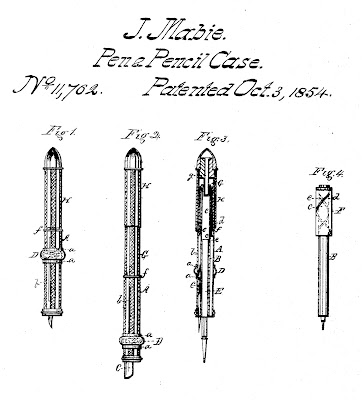 Over the winter – I couldn’t tell you exactly when, because every day has been about the same for a year now – Janet and I were getting stir crazy so we made one of our every-so-often pilgrimages to southeastern Ohio and the antique malls that dot the hills in the area.  In one showcase I spotted something.  If it was what I thought it was, I knew I’d need to have it . . . 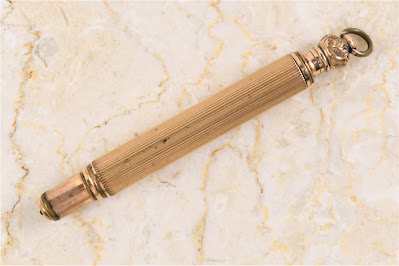 Under the watchful eye of the keeper of keys, I pulled back on the rear of the pencil . . . 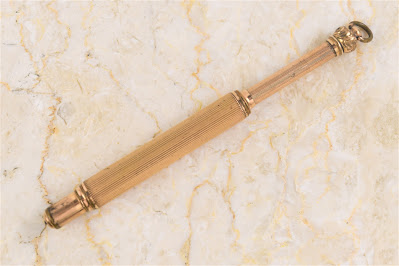 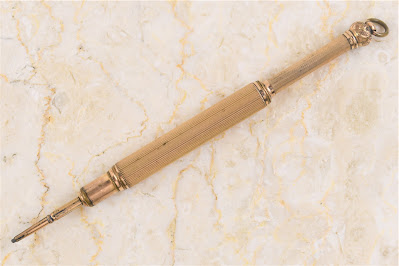 OK, that’s a little different, if it is what I think it is . . . now for the really interesting part.  “Honest . . . I know what I’m doing,” I reassured my chaperone as I grasped that fat nose and gave it a sharp tug: 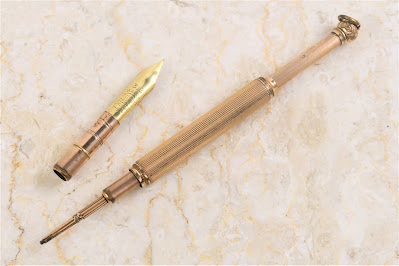 That nose probably hadn’t been pulled off for more than a century, because not many people know it’s there.  Even without any apparent markings, I recognized it as an example of one of Mabie Todd’s lesser-known innovations, patented by George W. Mabie on March 16, 1875.  That suspicion was confirmed by the nib inside: 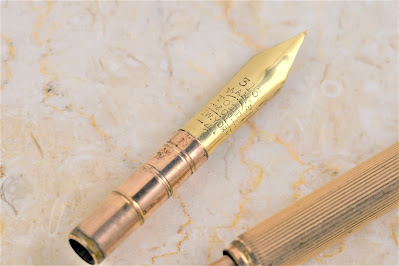 I published an article on the subject in Volume 4, at page 276, right after I learned these existed: 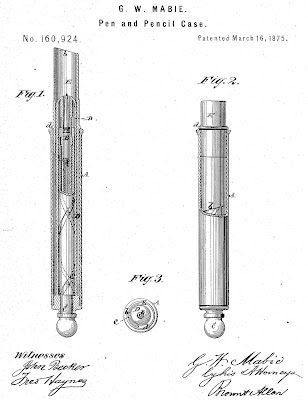 All the others I’ve found – two larger ones from David Moak’s collection and the random find that triggered my last article about these – have a hard rubber barrel: 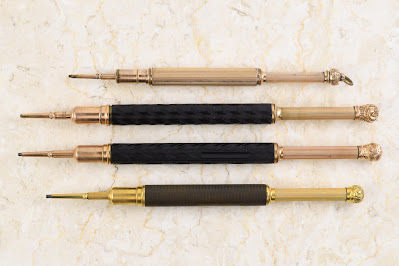 David’s examples, when I finally learned they opened up like this several years after I acquired them, didn’t have nibs in them: 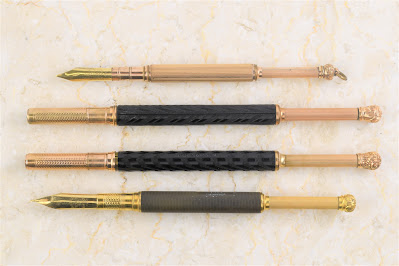 All the others were marked Mabie Todd & Co., and I was surprised that this all-metal example was apparently unmarked.  At home, I inspected it more closely with a loupe, and there it is, in very tiny lettering at the back end: 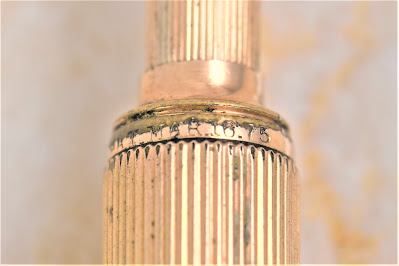 While I’m on the subject of weird Mabie Todd patents, I’ve had pictures of this one laying around for awhile.  Without much to say about it, I’ve just been waiting for a proper introduction: 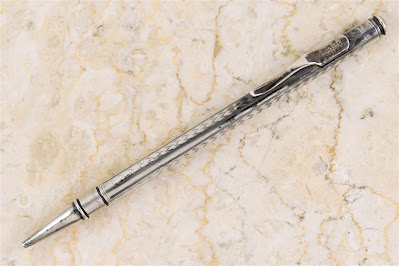 One of Mabie Todd’s hallmarks is imprinted near the top: 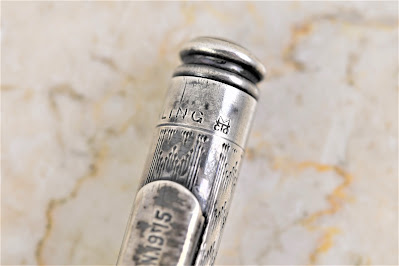 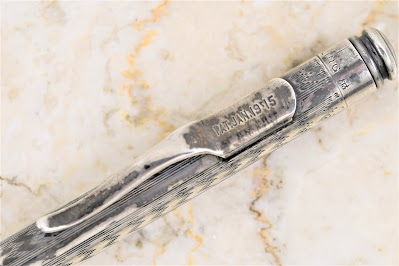 Then there’s that third imprint . . . the one I find the most intriguing: Patent Applied For. 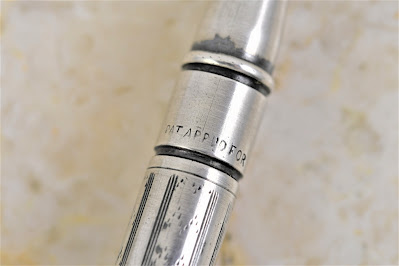 The pencil is completely frozen up.  The nose is the only part that should move, but it neither rotates nor am I able to pull it off.

If the patent was issued, and if it was assigned to Mabie Todd & Co., only three pencil patents would have been pending during the right time frame.  Herbert L. Carman’s patent number 1,489,590 was applied for on June 28, 1920 – that isn’t it, because the drawings show a nose that screws right off to reveal the lead magazine: 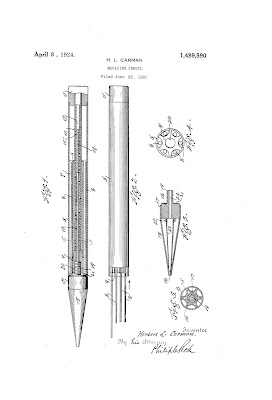 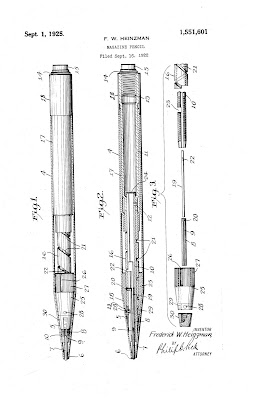 None of these patents fit, but then again . . . maybe it wasn’t assigned to Mabie Todd, or maybe it was never issued at all.  Short of destroying this example by tearing it apart, or finding an identical example with a patent date or number, I’m stuck.
Posted by Jon Veley at 3:45 AM