This one went around the block a few times in the online auctions before I finally caved.  The price made me gulp a little bit, but I knew it was worth it:  “That’s a fair price,” as Rob Bader says, “but I was looking for an unfair price”: 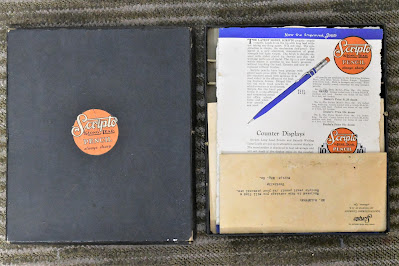 It’s a Scripto salesman’s kit, and it is completely intact.  Mounted inside the lid are directions for operating Scripto pencils, “Sharpont” pencils and “Duopont” (double ended) pencils.  Note that the Duopont page reads “see other side”: 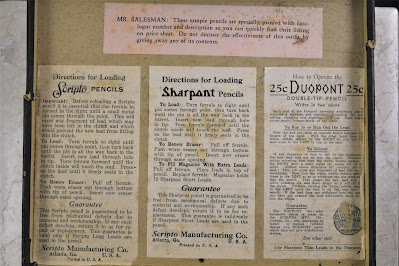 None of the materials are dated, but I wrote about a nearly identical Duopont instruction sheet in Volume 3, page 234-235, which was dated September 1, 1932 on the back side. 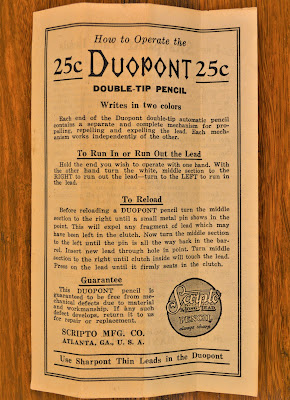 The box lid includes an admonishment to “Mr. Salesman” not to give away any of the contents of the kit and “destroy the effectiveness of this outfit”: 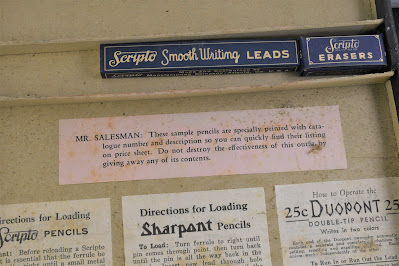 Whoever was entrusted with the care of this kit must have taken that warning to heart – even the pencil packaged in an envelope, “a Scripto pearl pencil for your personal use,” is undisturbed: 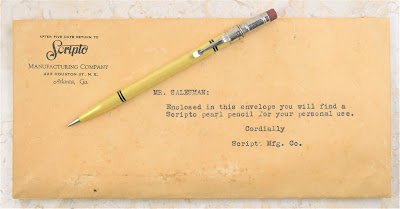 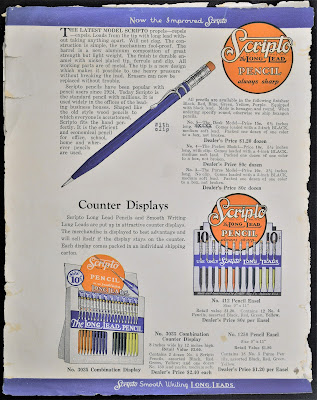 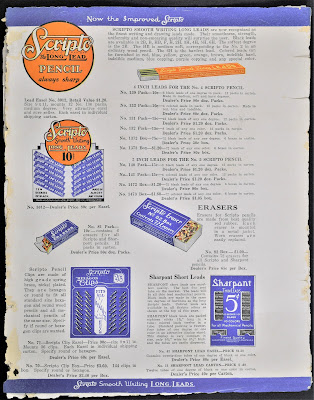 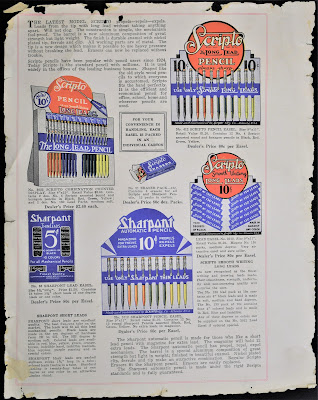 The fourth, however, is invaluable to fans of the Scripto brand: a detailed list of model numbers with descriptions: 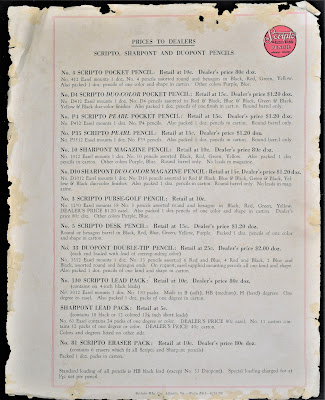 Remember that warning to “Mr. Salesman” not to give away any of the contents of this outfit?  The kit includes a fully stocked display of Scripto pencils, all marked with model numbers matching the printed list: 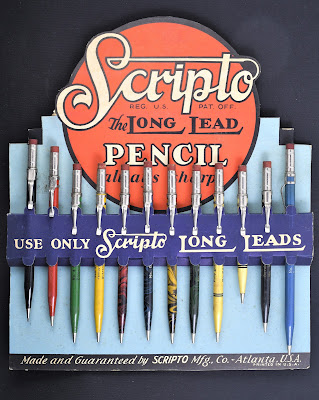 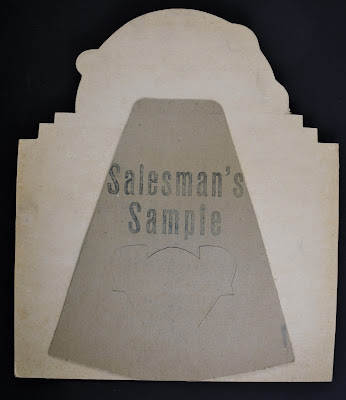 There are four examples of the Scripto No. 4, two with round barrels and two with hexagonal ones: 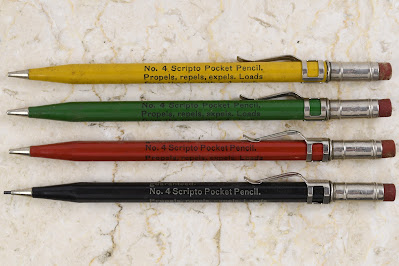 Scripto’s accommodation clips sure were classy: 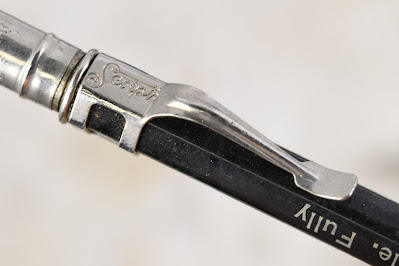 In addition to the model name painted on the barrel, it’s also stamped on the top: 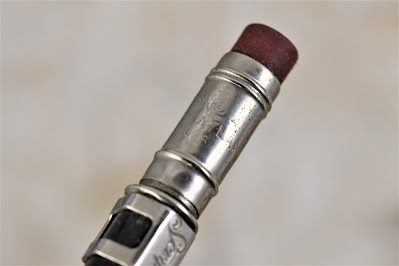 Model D4 designated the same pencil, but in “Duo-Color,” and there’s four of those here, too: 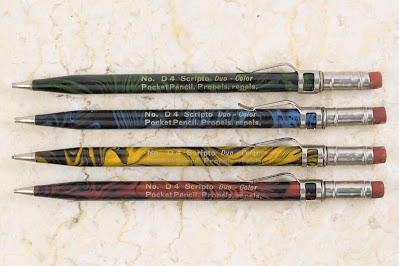 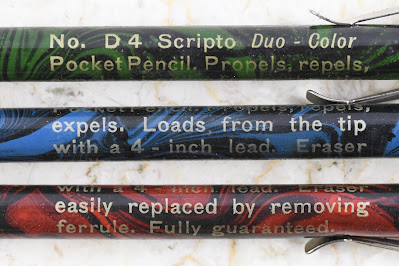 The top ferrule on these is more clearly stamped, with the D4 designation as well as another detail which helps date this: 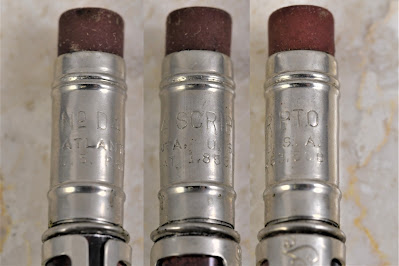 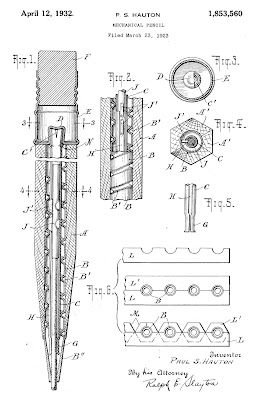 Incidentally, Hauton’s patent was assigned to “The Atlantic Manufacturing Company,” a Georgia corporation - not to Scripto.  Whether that was a manufacturing subsidiary or something else, I don’t know.

Here’s the last four pencils in the display: 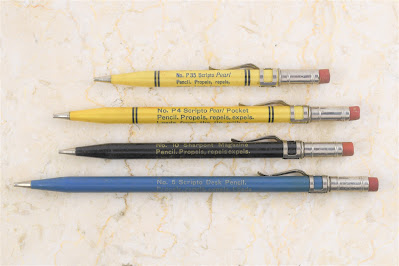 The “P” prefix stood for Pearl, and while the P4 is bigger than the P35, the P4 is referred to as a Pocket Pencil. 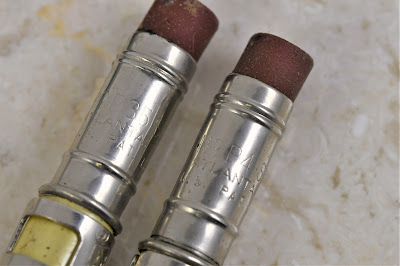 Third down is the Model 10 “Sharpont,” which according to the product list was a “magazine” pencil, with a chamber for spare leads – shipped without spare leads, though.  The upper ferrule is something I haven’t seen before: there’s the model 10 designation, and Scripto’s distinctive “Sharpont” logo. 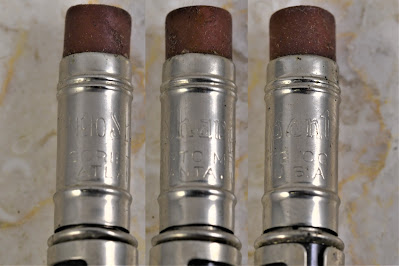 Last is the Model 5 “desk pencil.”  In addition to its unusually long size, the Model 5 has a more elaborately stamped ferrule, with Scripto’s script logo rather than the company name in plain block text.  It also bears Hutton’s 1932 patent number: 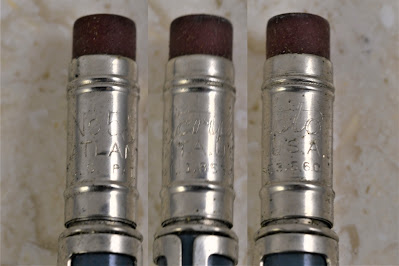 Not much has been left out of this product sampling.  On the product sheet, only the Model D10 (the Sharpont in “duo-color” paint), the No. 3 “Purse-Golf pencil” and No. 33 Duopont “Double-tip” pencil are unrepresented.  The Duopont was covered in that article back in Volume 3. 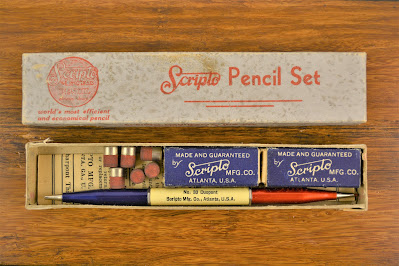 I don’t have a plain old Model 3 in my collection, but I do have one stamped P3 . . . and it’s identical, other than the model designation to the P35. 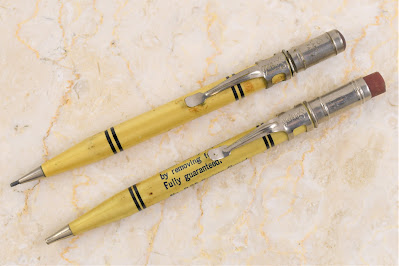 As for that Model D10 . . . boy, that would be nice to see.  Until this kit came along, I had no idea Scripto offered those neat “duo-color” paint jobs, and finding one with the Sharpont imprint too would be neat.
Posted by Jon Veley at 3:45 AM

Jon- I’m glad you were the one who got this Treasure Trove of Scripto Memorabilia that you’ll add to the Museum.