Since these are unmarked, they frequently go unnoticed: 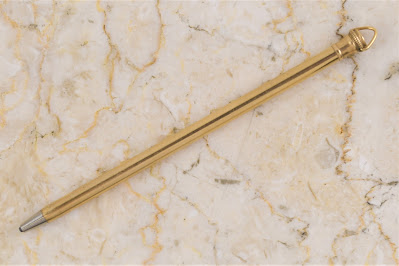 It is an Eversharp “Match Thin” pencil, a curious little diversion for the company into the novelty market, since these are not very comfortable to write with.  Here it is shown alongside a regular-sized Eversharp: 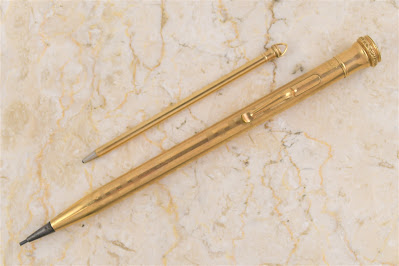 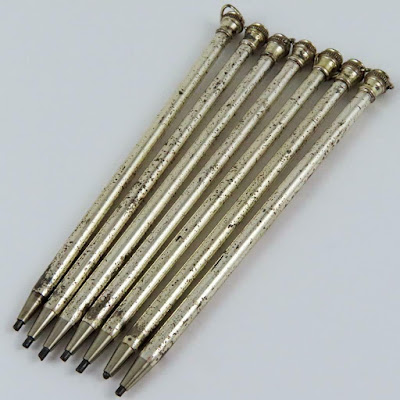 It was in my watch list, and I went back and forth about whether to bid . . . could these be silver plated “match thin” pencils?  The angle wasn’t very helpful, there were a lot of cheap imitations and . . . someone else had placed a bid on it.  For whatever reason, I didn’t feel like rolling the dice that day.

Fortunately, it was David Nishimura who was in a gambling mood, and a couple weeks later they were showing up on his website.  Yes, I paid more for one than he paid for the whole party, and it was worth every penny to have one: 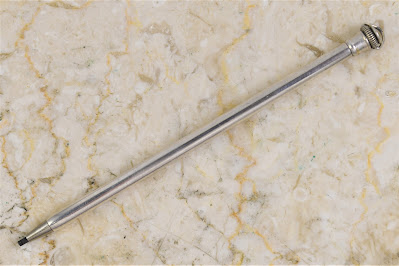 These were the first “match thin” pencils I’ve seen in silver plate, but after I reviewed Eversharp’s catalogs I should have known they were out there.  Both the silver plate and gold filled versions appear in the 1924 catalog, a weird year for Eversharp which saw the transition to the new improved version of the regular line pencils as well as those strange miniature side clip versions, which were illustrated on the same page alongside match thin pencils: 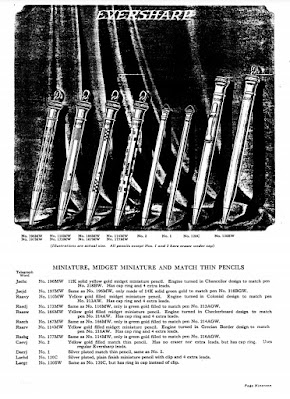 Had I remembered this, I would have been much more rabid about chasing that lot of silver plate ones.  The gold filled pencils you usually see were denominated simply as Model No. 2, while the silver plated ones . . . well, they were Model No. 1.  The OCD Eversharp collector in me simply couldn’t bear to have an extensive collection starting with Model No. 2! 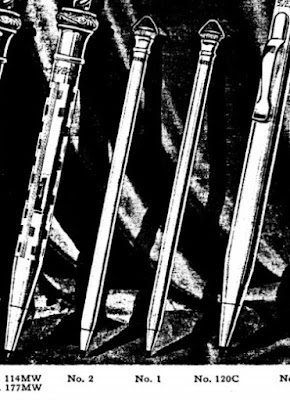 I believe the reason the silver plated “match thin” pencils are so much more scarce is that they were apparently discontinued after just one year, while the gold filled Model 2 remained in production, appearing in the 1925 and 1928 catalogs.  Here’s the page from  1925: 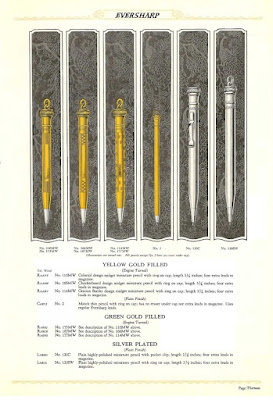 The gold filled match thin makes its final appearance in the 1929 catalog, but it was redesignated as Model 1060W and the name was shortened to “Match pencil”: 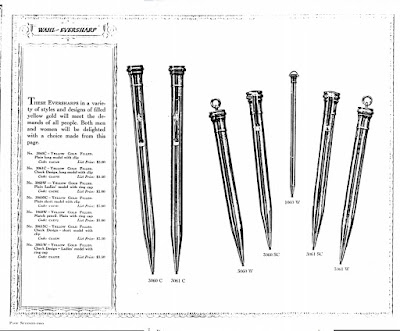 Meanwhile in England, consumer tastes continued to favor all-metal pencils later than in the United States, where they fell from fashion as brightly colored celluloid pencils began to dominate the market.  Early on at the blog (Volume 1, page 130) I discussed a boxed version of the “Match thin” Eversharp, marketed in England as “The Tiny Eversharp”: 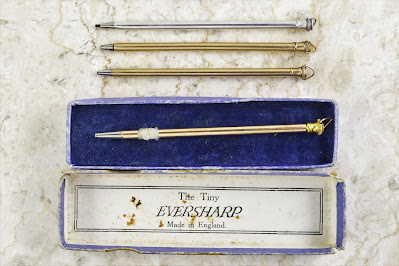 I believe these were made later than their American cousins, since the nose is significantly longer: 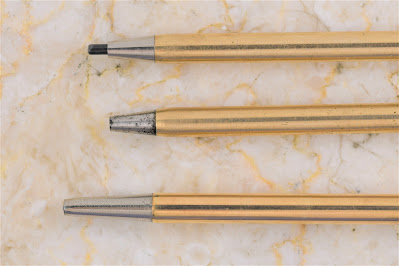 What sets miniature Eversharps apart from the cheap imitations is the mechanism.  The familiar pushrod assembly is replaced with a simple screw which drives the lead forward, an efficiency which makes the small diameter possible.  That mechanism, however, is not unique to the match thin pencils.  It is also found on Eversharp’s metal checking pencils: 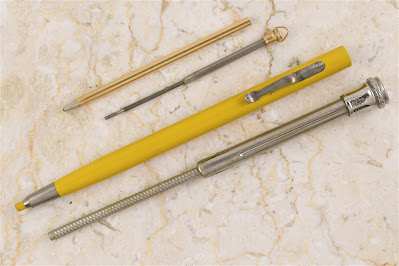 The match thin is a proportionally exact, miniaturized version of the Eversharp checking pencil . . . which brings me to the second part of this story.  Most of these checking pencils, with their .120" diameter leads, had painted barrels which matched the color of lead with which they were originally fitted (see Volume 2, page 193).  However, Eversharp also offered checking pencils in gold fill and silver plate, referred to in catalogs as “Executive” pencils - the Wahl version of a broker’s pencil.  They were illustrated in the 1925 catalog, denominated as Model 32 (plain silver plate), 34 (check pattern, silver plate) and 67 (check pattern, gold filled): 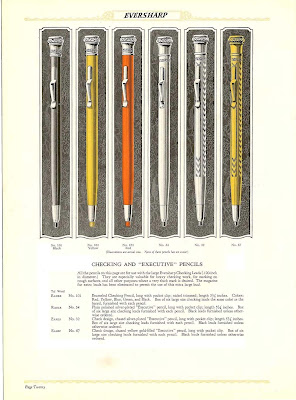 At the Raleigh show a few years ago, Brian McQueen parted with a Model 34 that was worse for wear.  Recently, I turned up one that was a significant upgrade: 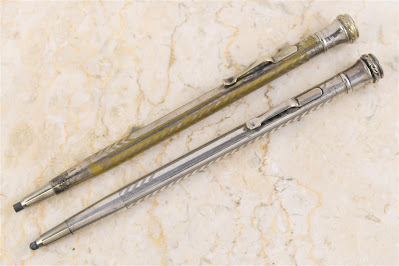 Brian’s example had an interesting feature not seen on my new one: the Eversharp imprint appears both on the barrel and the cap.  Given the wear on both I don’t question whether it has been this way for perhaps its entire life, but I don’t believe that is significant.  Enameled checking pencils were marked only on the cap like this, so whether the cap was replaced early in the pencil’s life or slipped out of the factory like that is largely academic . . . as I’ve said many times, if you can “make” a rare variation by mixing and matching pieces, the sum is never worth more than the parts. 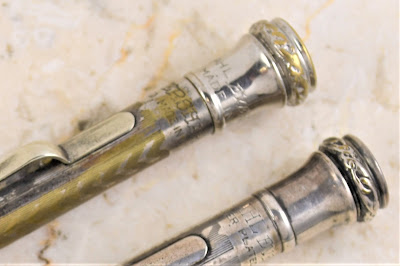 After I upgraded my Model 34, I was ready to run this article with an updated family photo of Eversharp Executive pencils, including the 34, a 67 and an uncataloged variant with a short, smooth barrel and military clip (see Volume 4, page 199) 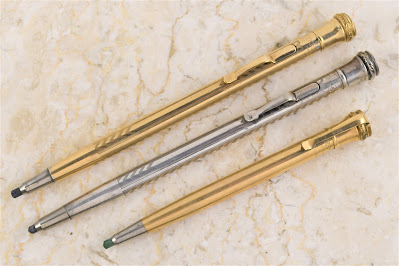 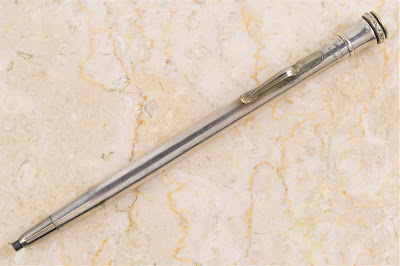 As mentioned earlier, consumer tastes in England favored all metal pencils longer than in the United States, which might explain one tiny, telling detail: 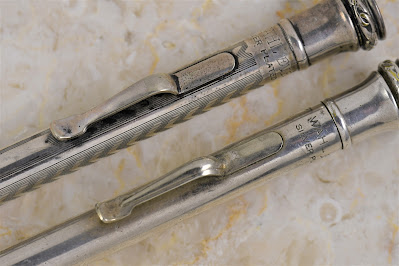 While that medial rib was added on Eversharp’s regular line in 1924 for greater stability, flat, pre-1924 clips are illustrated on checking and Executive pencils in Wahl’s catalogs through the end of the run in 1929, and I’ve never seen an Eversharp outfitted for checking leads that have the later clip.  Perhaps it was a factory error, perhaps it is a replacement.

The barrel is stamped “Made in USA,” but since it has only recently arrived back on our shores from England in the last few weeks, a third possibility is that it was made much later, after Wahl’s supply of flat clips was exhausted, for export to the English market.

I’ll admit that it drives me a little crazy that my Model 32 has a different clip from the others, but it’s a good crazy . . . the same feeling I get from that uncataloged variant: 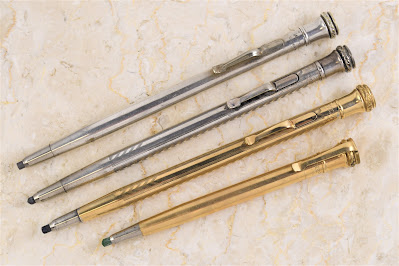