Still Feeling Around for the Walls

I think the reason collecting mechanical pencils has managed to keep my interest for all these years is because the variety still appears infinite. I still feel like a fifteenth-century cartographer trying to draw a map of the world, with the edges of continents trailing off into little caricatures of sea monsters and such – or like I’m sitting in the middle of the convention center ballroom trying to figure out where the walls are with my eyes blindfolded.

So when the Mother Lode surfaced at the Philly show last month, you would think by now, with more than fourteen thousand different pencils in my collection, nearly everything in that bunch of 2,500 would have been things I’ve already seen. And yet, so many were outside the borders of my known pencil world — as the cartographer in me picks up a pencil and sketches out a few more miles of rocky terrain.

I still haven’t had time to completely sort through the Mother Lode, and with all those bags and boxes of pencils sitting around, so when I went to the local antique show at the fairgrounds just a week after Philly, it wasn’t to look for pencils so much as for something to do in January in Ohio.

And there, in the first couple of tables, and for just a couple bucks, was an ever-present reminder that I will never claim to have seen everything: 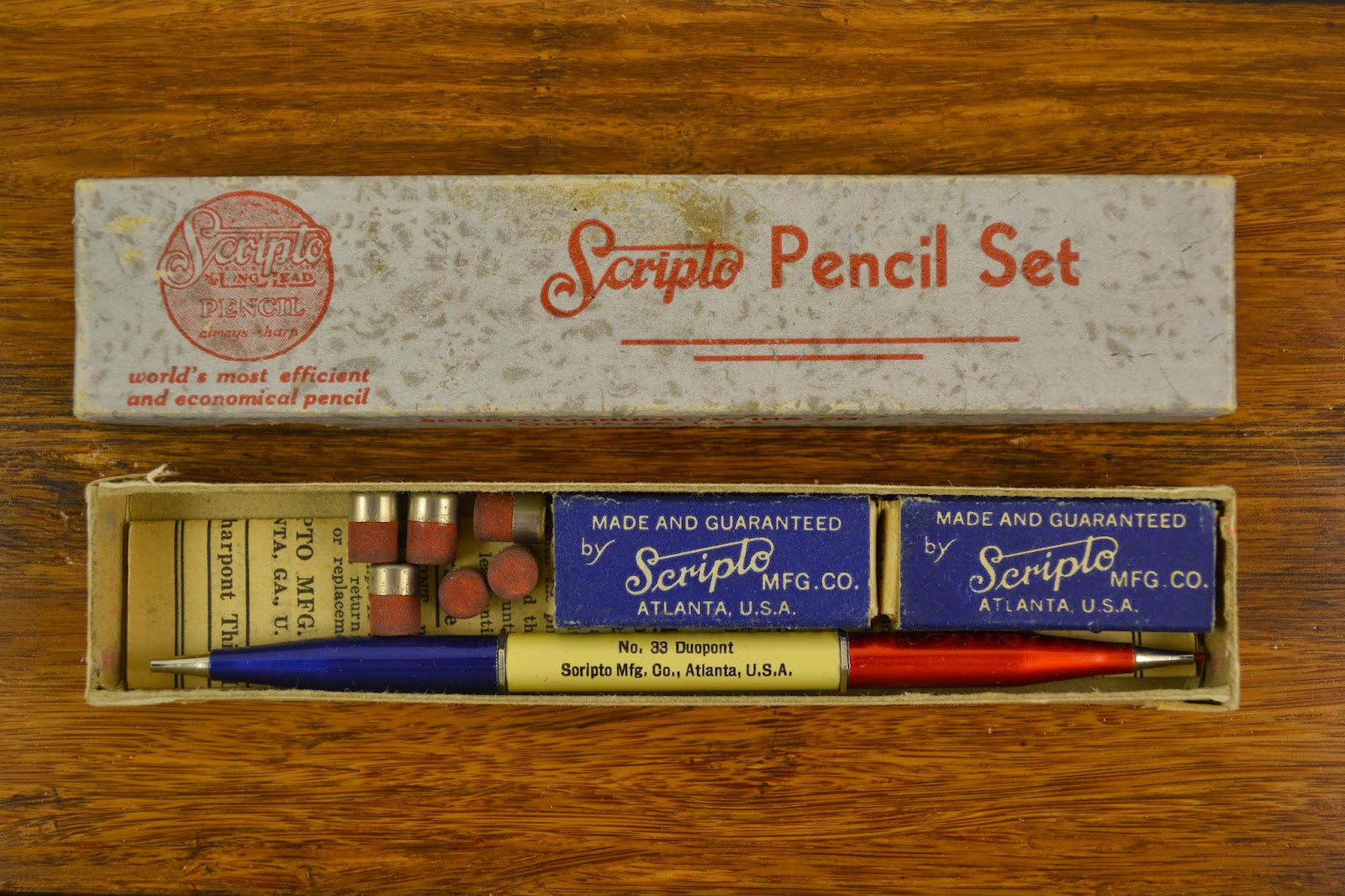 The pencil is something you don’t see very often - a "No. 33 Duopont." What I’d never seen before was a boxed set. The erasers, I think, were just something someone happened to throw in the box – they don’t fit anywhere on the pencil, obviously. There’s two boxes of leads, too: 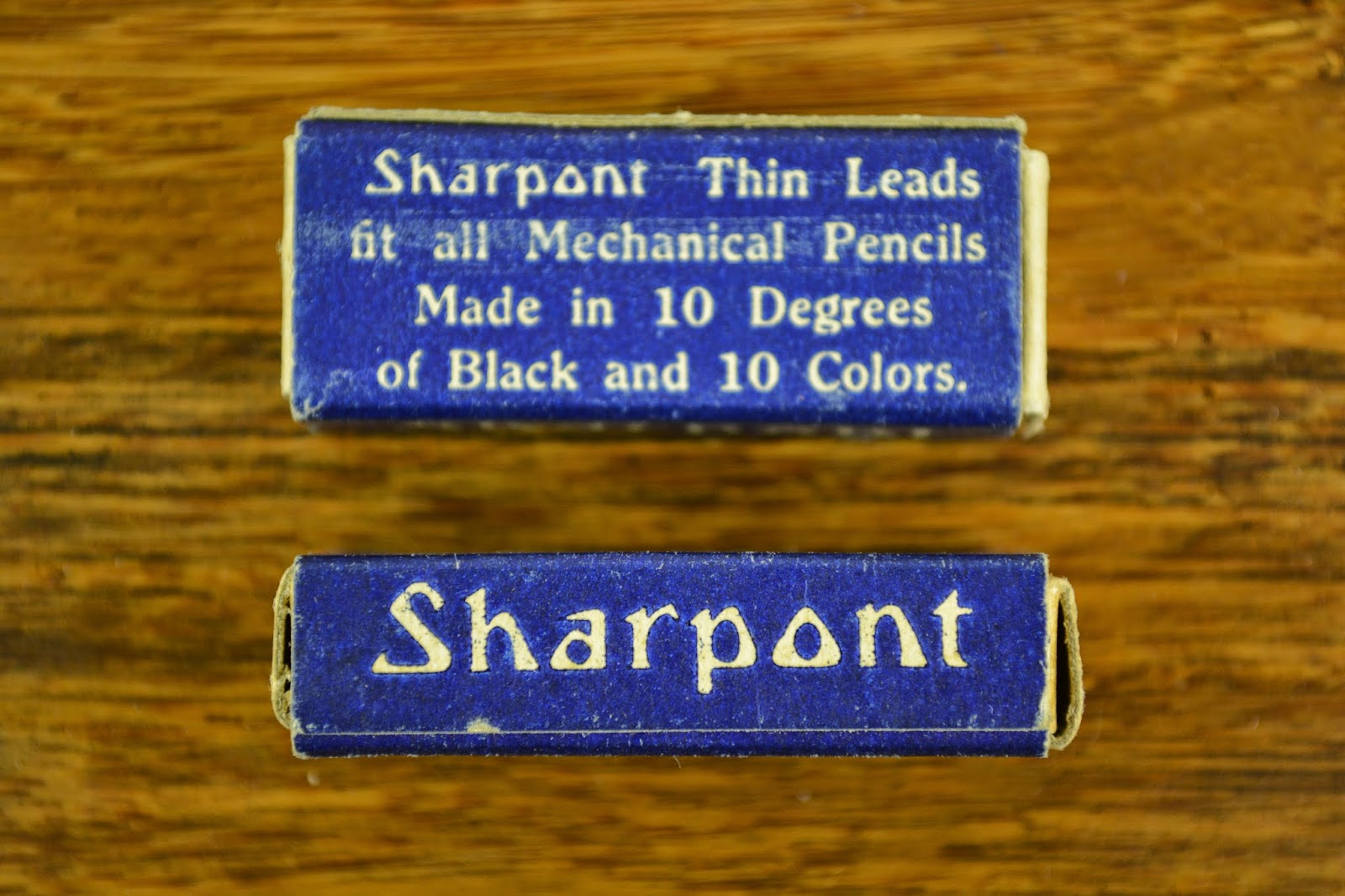 Ten degrees of hardness and ten colors, and there’s probably a story behind the name "Sharpont" and that triangularish "o". Were the lead boxes something else just thrown in there? 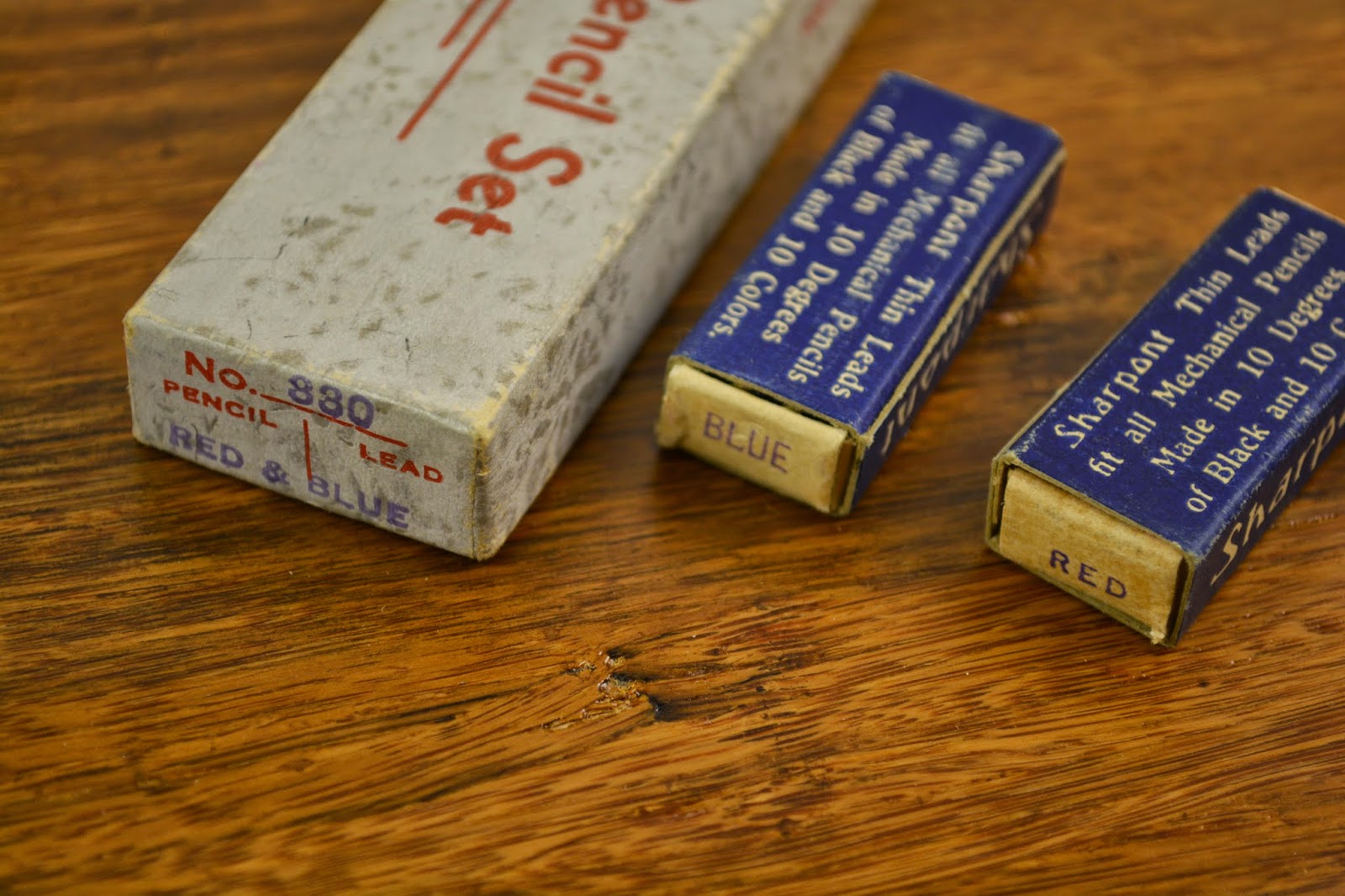 Nope. Matching boxes of lead, in red and blue, in a box denoting a No. 830 set with red and blue lead. Last but not least, you might have noticed an instruction sheet peeking out from under all this stuff in the floor of the box: 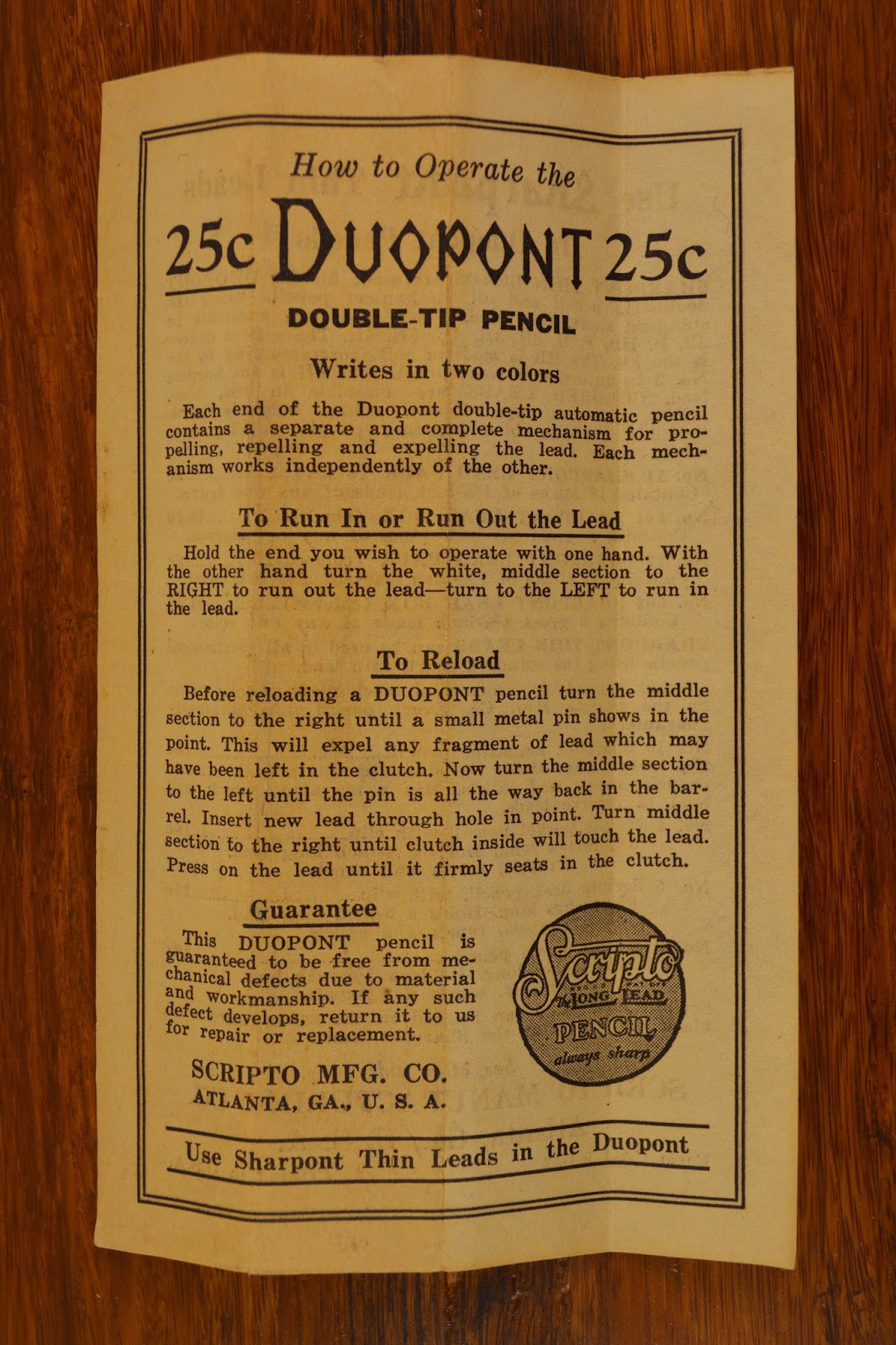 Note the arrows on the word "Duopont" -- I'm sure the Eagle Pencil Company wasn't amused, since Eagle registered a trademark for the word "Pointer" with those same arrows and angular letters.  Lest you harbor any doubt, look at that last line: "Use Sharpont Thin Leads in the Duopont." Here’s the back of the instruction sheet: 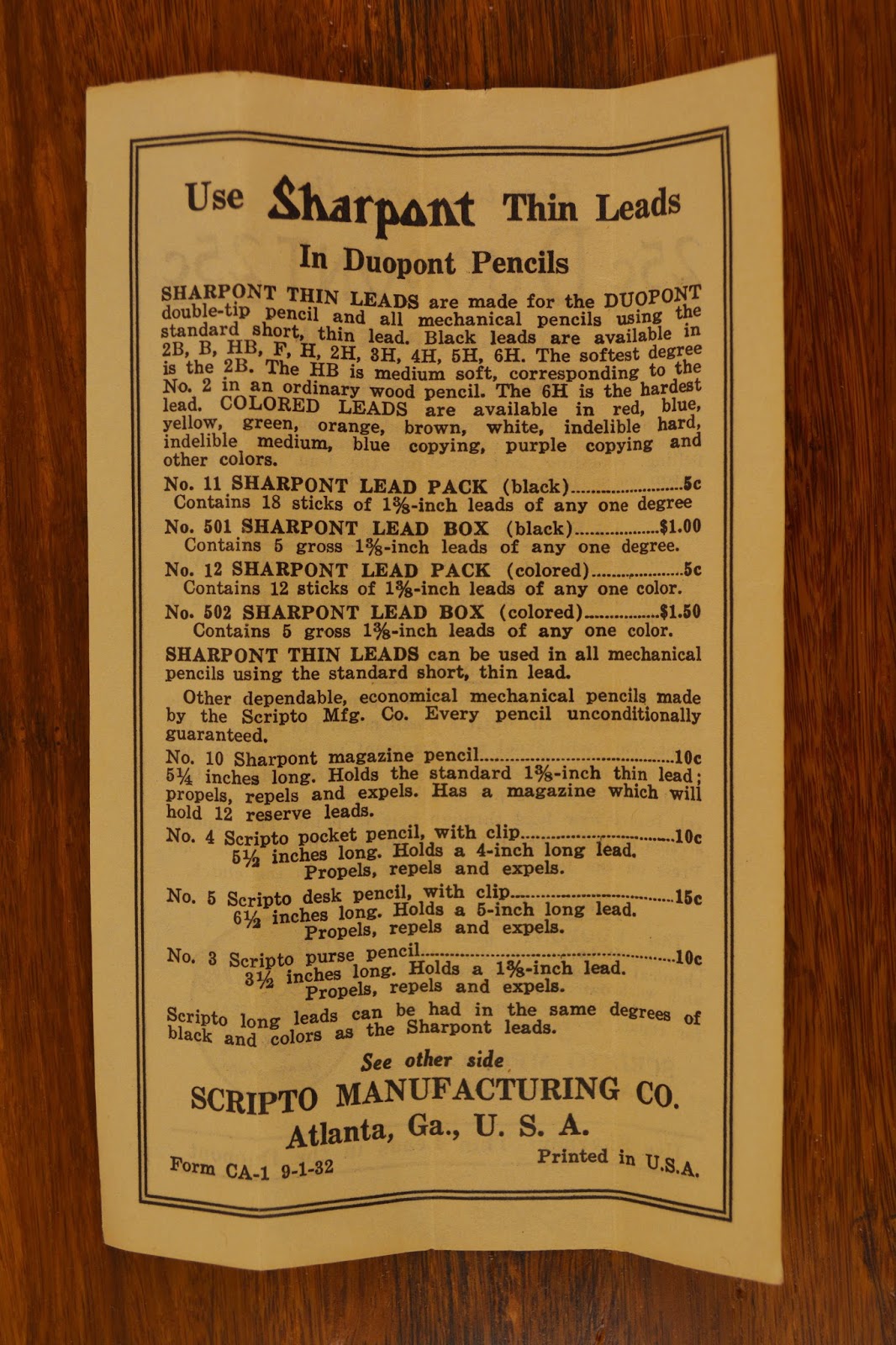 I will never have seen it all, I will never know it all and there’s no way I can write about it all. Guess that means I’ll keep looking, keep learning and I’ll see you here tomorrow!
Posted by Jon Veley at 6:06 AM

Email ThisBlogThis!Share to TwitterShare to FacebookShare to Pinterest
Labels: Scripto

I have seen hundreds and hundreds of Scripto pencils, but never anything like that

Thank you! Yours is the only info I've been able to find on Sharpont pencils. Although it isn't as exciting as your Duopont, I have the no. 10 Sharpont pencil. It is as described on the reverse side of your brochure (with the addition of an old advertisement for an auto financier in Philadelphia). I love old mechanical pencils and I look forward to learning more about your "mother lode".