An online discussion recently turned to the Eversharp’s line of "purse pencils," which were listed in the company’s 1932 catalog.  One author commented that he had once photographed all eleven colors. 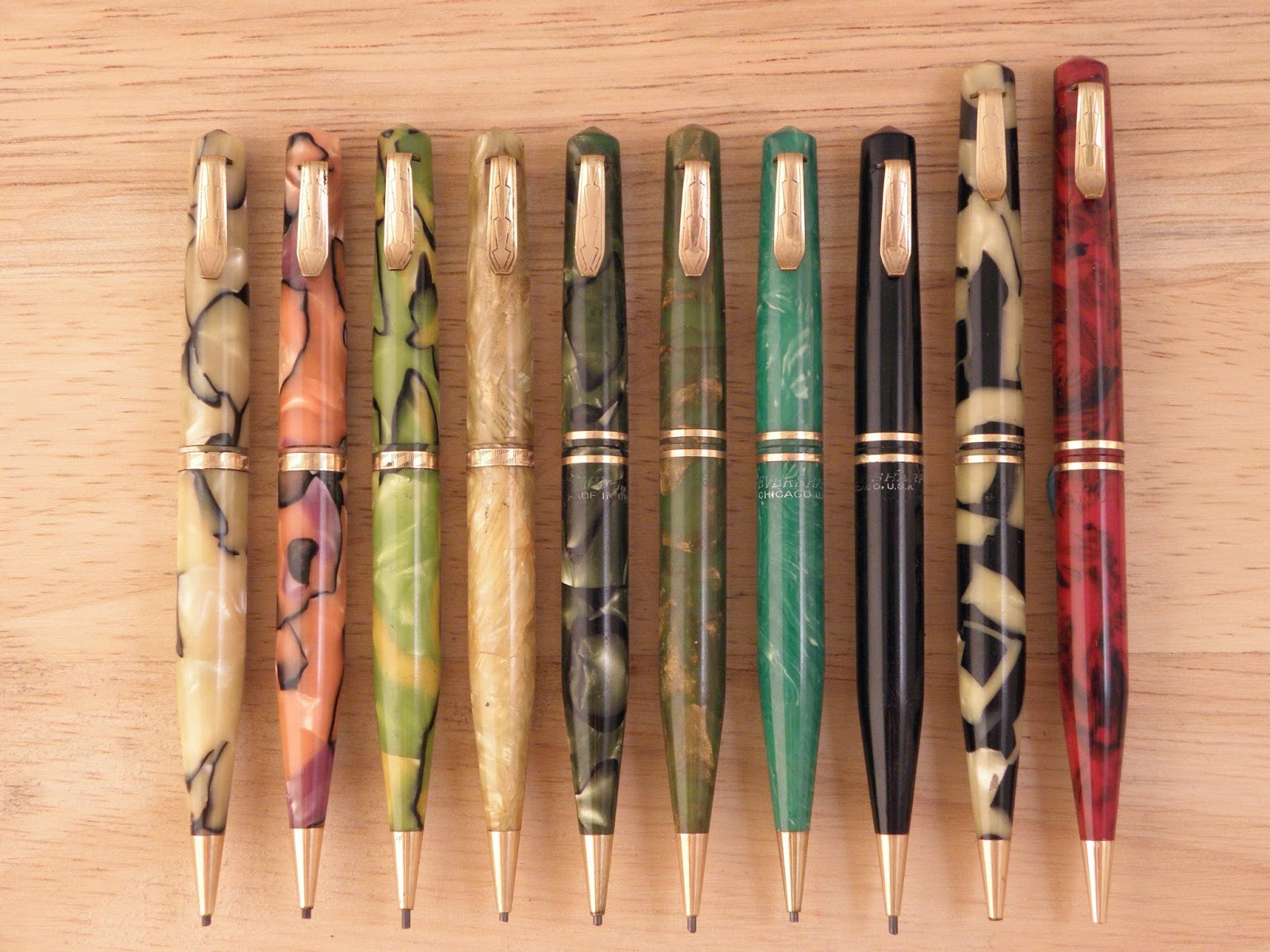 Notice that there’s two sizes and two band styles, which is partly explained by the 1932 catalog. Here’s the page featuring these, from the PCA’s online library.  Note that just to the left of the single-band ladies' models are the "Clasp Models" which according to the catalog were a little bit bigger and came in the more manly colors of Jet Black, Black and Pearl, Jade Green, Flamingo and Kashmir Pearl. 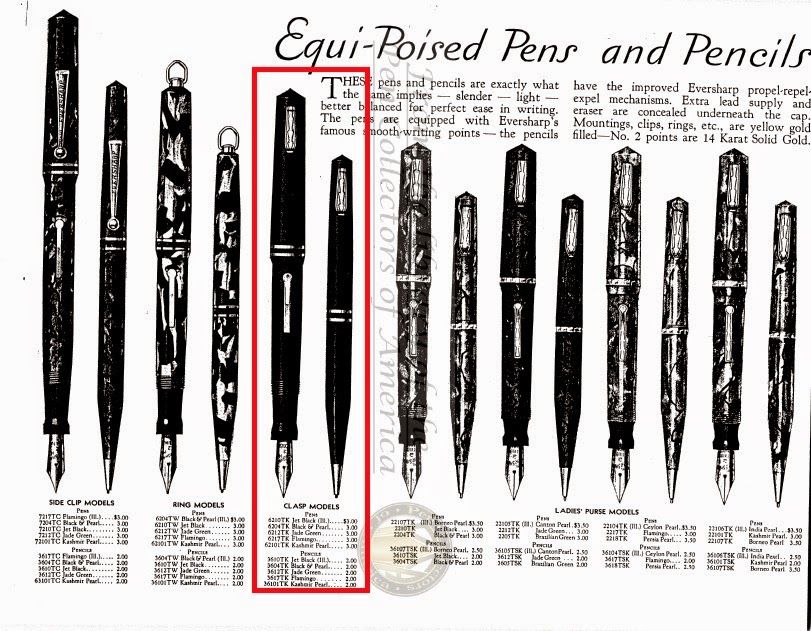 The flamingo example shown here was the inspiration to reshoot this group. It came from David Nishimura: 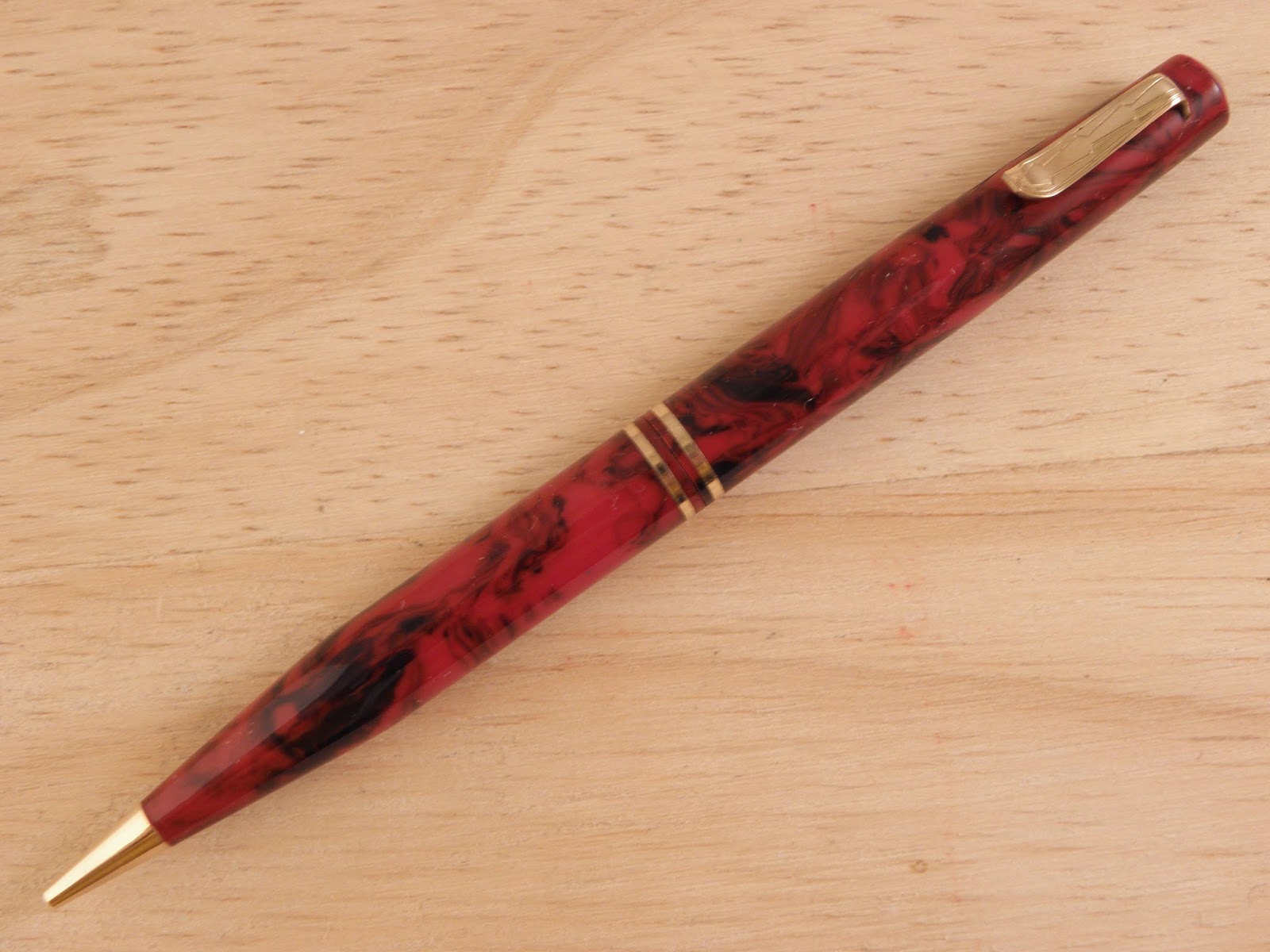 Killer, yes. A little bit bigger, like the catalog shows? Yes. But with a price tag? 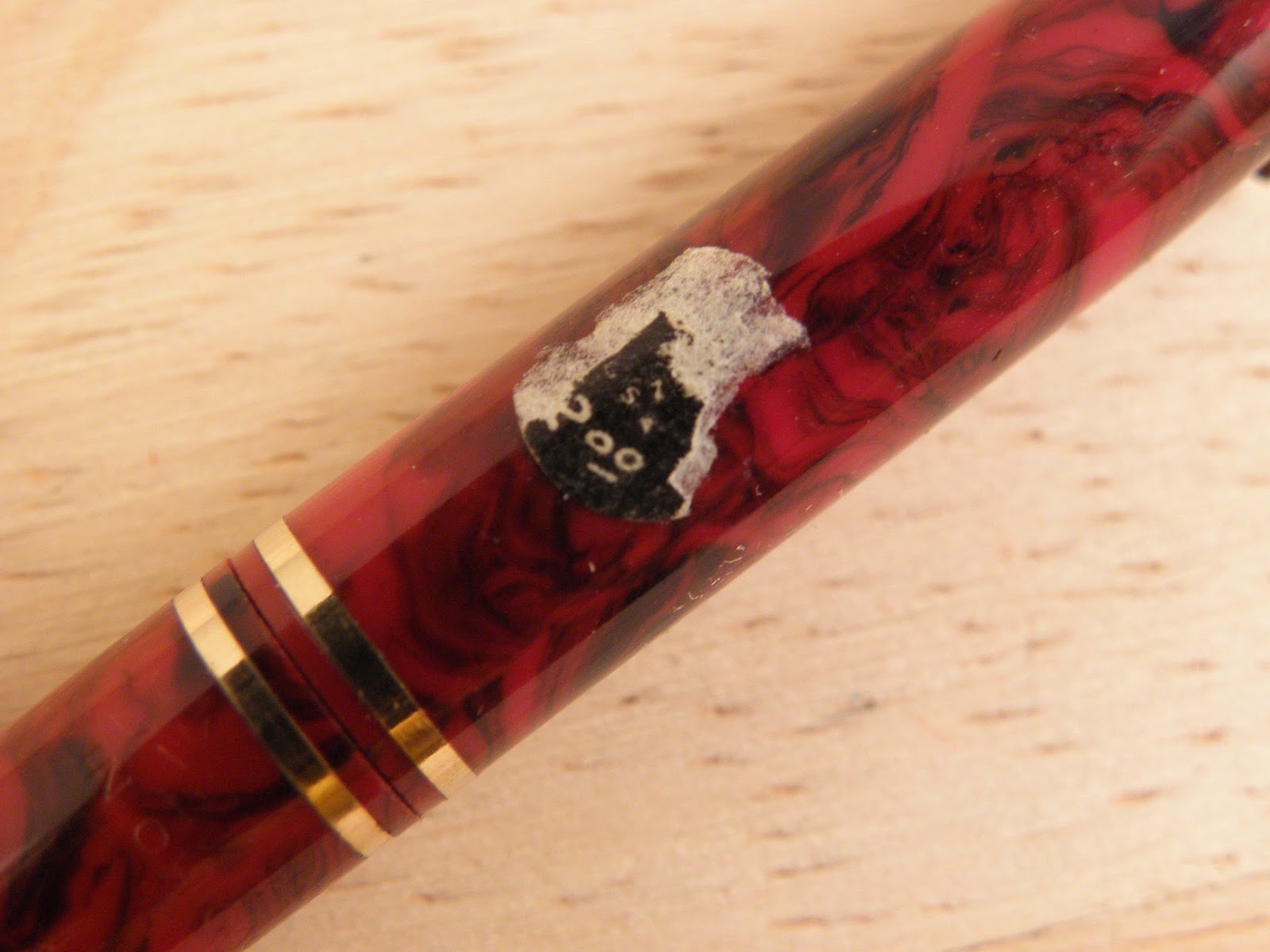 Yeah, baby. Absofrickinlutely. But I’m getting off track.

One question that the 1932 catalog doesn’t satisfactorily answer is whether there were two sizes of "Clasp Model" pencils, or whether the smaller ones were "Ladies' Purse Models" and the manlier colors had the same double band as their larger cousins.  Since the catalog doesn't illustrate any Ladies Purse Pencils in the manlier colors, all I can say is that all of the manly-colored examples I've seen, whether larger or small, have double bands.

But the more pressing question to me is nailing down exactly how many colors were made and what they were called. Take a close look at the catalog listings, and you will see that in fact there are eleven colors listed, because for whatever reason, "Borneo Pearl" is listed twice (the second time, the pencil is listed at $3.50, but it has the same catalog number):

Out of the eleven catalogued colors, the first five are self explanatory:

The next one is a familiar one as well:

6.  Brazilian green, or "green and bronze" as some collectors call it.  Note that it shows up only in the Ladies’ Purse line up and not in the Clasp Model lineup, and my example is in the smaller size. Doesn’t that prove that all the ones in these colors had double bands, whether they were part of the larger Clasp Model line or the small Ladies' Purse Model Line? Maybe. It’s marked Made in USA, but I bought it from a seller from Argentina online. It might have been made for export – so it might not fit the American catalog.

That leaves five other colors described in the 1932 catalog. The full color copy of that catalog isn't very convincing that the colors were true to what was actually produced 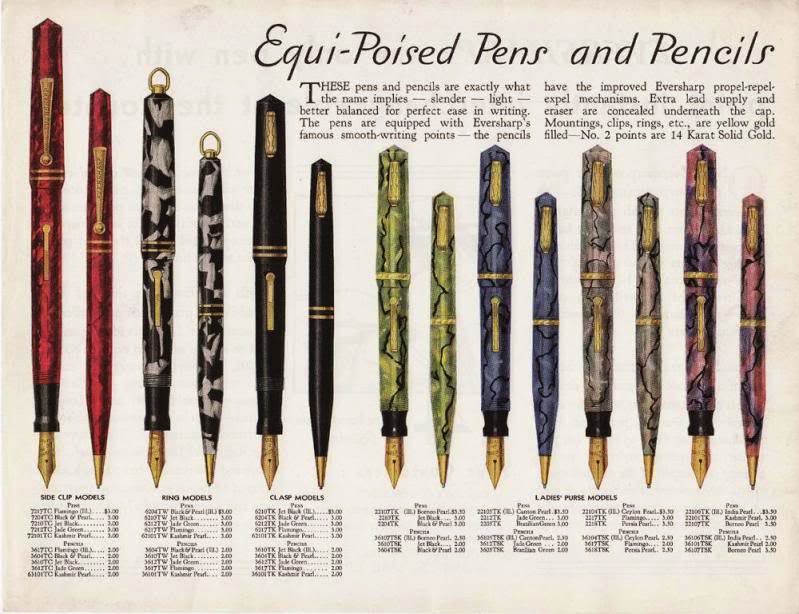 However, the catalog does help to narrow things down a bit, because four of the five remaining colors were illustrated:

7. Borneo pearl: in the catalog, this one is greenish.

8. Canton pearl: this one is blue. I don’t have one of those.

9. Ceylon pearl: this one is pinkish in the picture.

10: India pearl: this one appears to be a more vibrant pink.

Then there’s the eleventh and final cataloged color, which isn’t illustrated anywhere:

So how many were really out there?  Starting with what I have and putting the catalog names on the colors, here’s what I know: 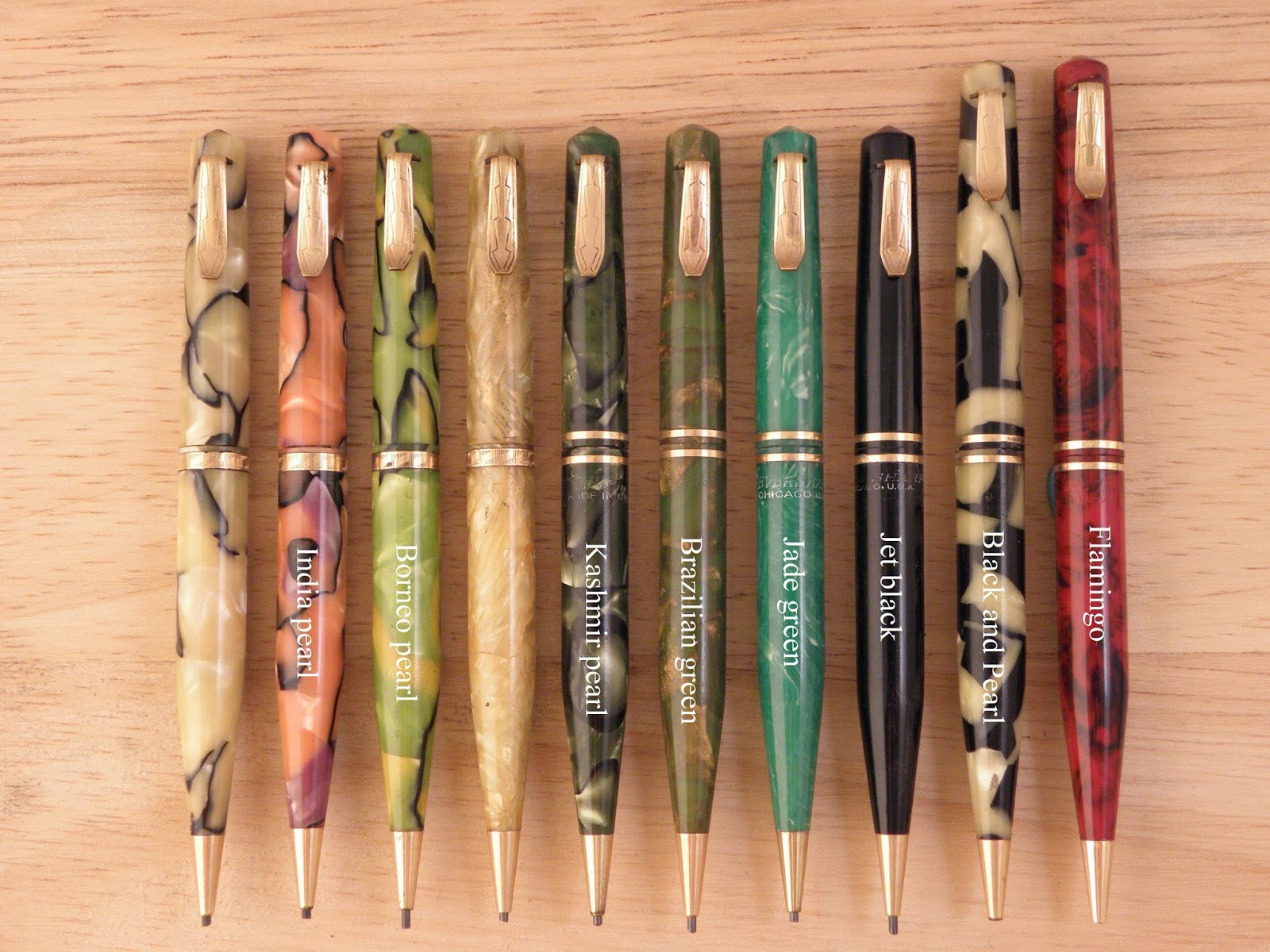 That's eight definite labels, maybe nine -- the fourth from the left might be "Persia Pearl" -- note how similar it is to Waterman's "Persian" celluloid.

Then there's the one on the left, which doesn't match anything listed in the catalog.  That makes ten.

Canton Pearl (like Borneo and India, but in blue), which makes eleven.

Ceylon Pearl (if the colors are anywhere near right in the catalog), which makes twelve.

I don't think that one on the left is Ceylon.  A few years ago I bought an Eversharp which appeared to be a close match for the picture: it was definitely pink and grey.  Here's the best picture of it I could take at the time: 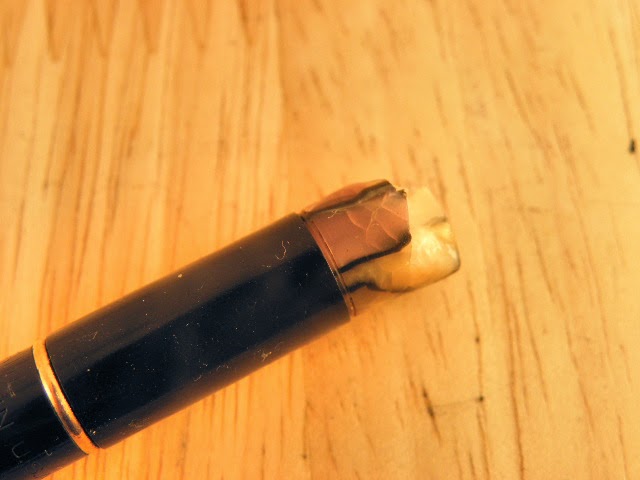 I'd take a better picture of it, but it was badly chrystalized when I bought it -- and that tip has since turned to dust.  Given my experience, it's entirely possible that all of the Ceylon Pearl examples no longer exist.

There’s another color that I understand might have appeared in Stylus Magazine some time ago that if anything, might be Ceylon Pearl. Unfortunately, the person who created the image states that the image was created by "Photoshopping pens using images from other pens in proper color."  I don't know what that means:  did that color really exist or was it created on a computer?  If it was a real color, that makes thirteen.

I can tell you that what you are seeing in the images here are true and accurate reflections of the ten different colors in my collection, and there’s at least two others – Canton and Ceylon – out there somewhere -- and maybe one more, if that picture in Stylus proves to be real.

No matter what, this means, catalog be damned, there had to be more than eleven.

Which leaves me wondering whether my recollection is correct . . . do I remember seeing a Clasp Model pencil in coral a few years ago?
Posted by Jon Veley at 3:45 AM

Email ThisBlogThis!Share to TwitterShare to FacebookShare to Pinterest
Labels: Eversharp

My thought is that the one on the left is Persia Pearl. All of the pearls have black veining. It would not be consistent to have one without veining called “Pearl.” I would stay within the line and look for consistency before going outside the line looking for similarity. That leaves #4 as the mystery to me.