A couple weeks ago I received an email from Sam Knechel, Jr. in Florida. Sam’s father (Sam Knechel, Sr) had recently passed away, leaving behind a large collection of fountain pens and mechanical pencils. The pens, Sam Jr.explained, were long gone – snapped up by the first dealer he contacted. Left behind were hundreds of mechanical pencils, and the pen guy he had dealt with suggested that he give me a shout.

Thank you, by the way, to my anonymous benefactor!

Sam said he didn’t think there was much there, so he sent me a few representative pictures of the kind of stuff that was there, and I made him an offer on the bunch assuming that the rest were about the same. A few days later, two large boxes appeared on my doorstep: 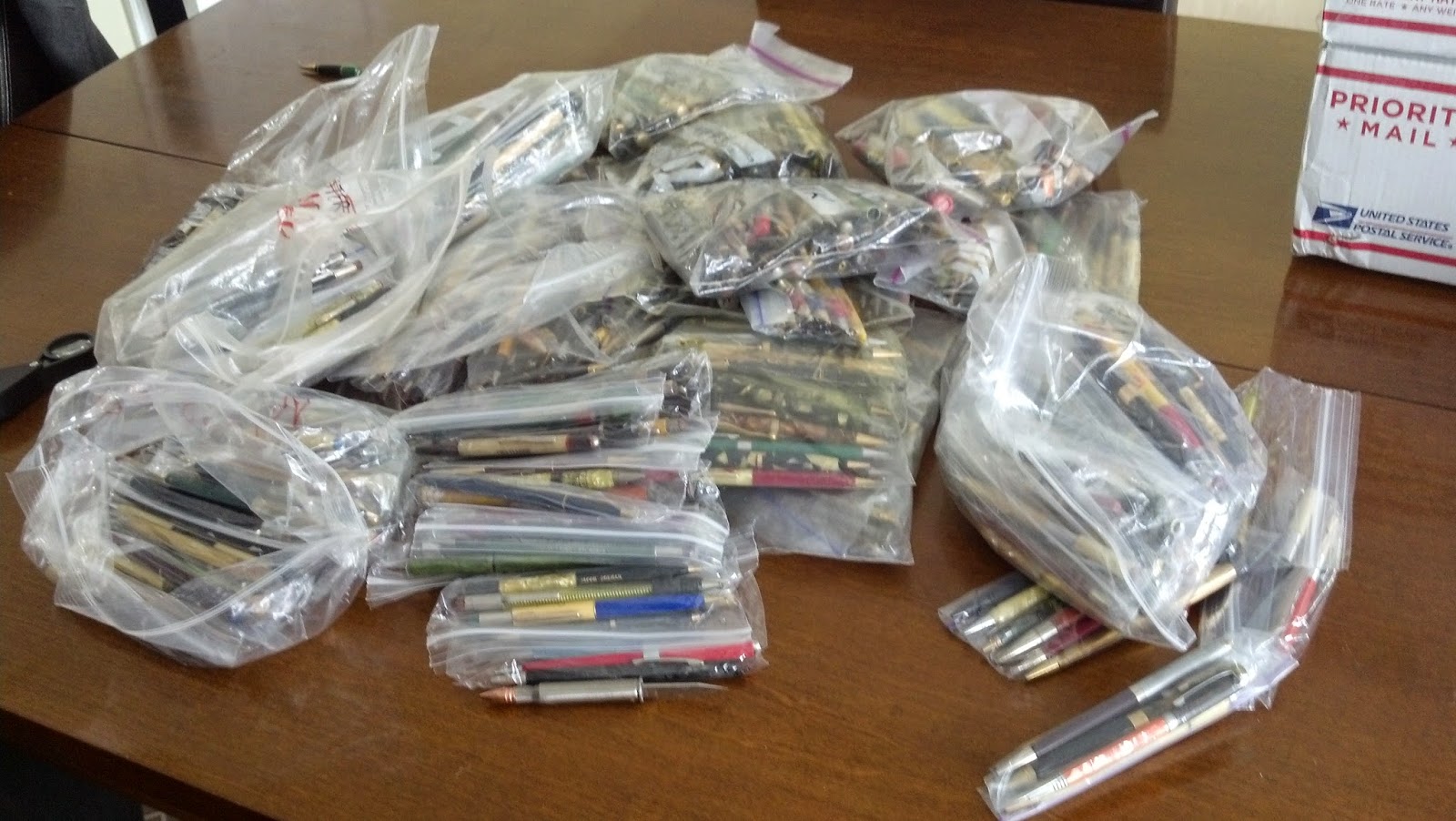 As I was going through things, I’d pulled out a few dozen things for my collection and added significantly to my parts bins. There were a few really interesting pieces that I’ll show you over the next few weeks, but it’s one of the parts pencils I’m going to start with: 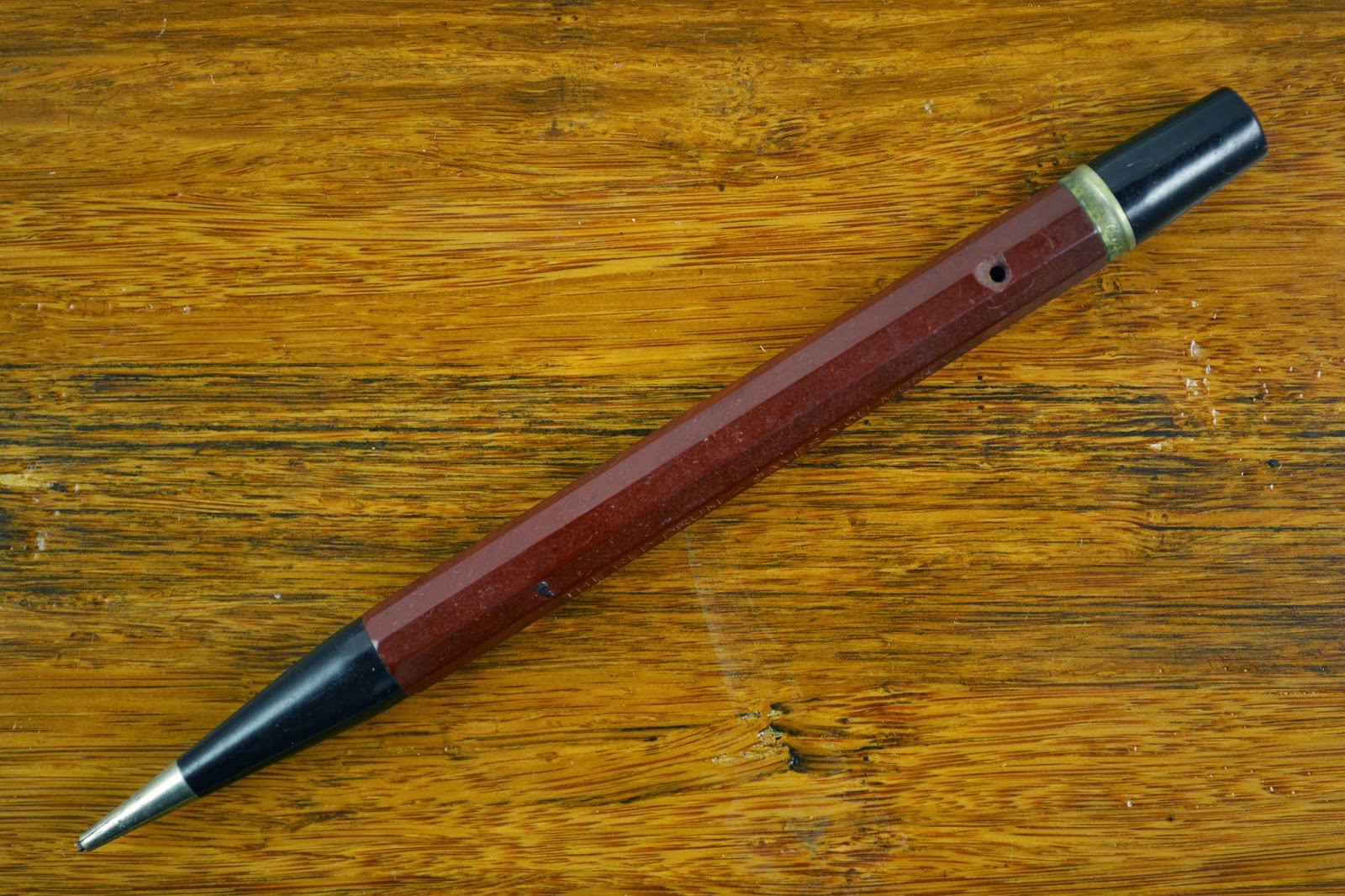 This Autopoint is one of the ones with the round, humped cap like I wrote about here a couple times in recent weeks – what I didn’t mention was that these caps often go missing, so finding a parts pencil with the cap was a sight for sore eyes. If I didn’t use it on one of the examples I had missing the cap, I was sure I’d find a use for that cap on another one.

I didn’t have to wait for long: 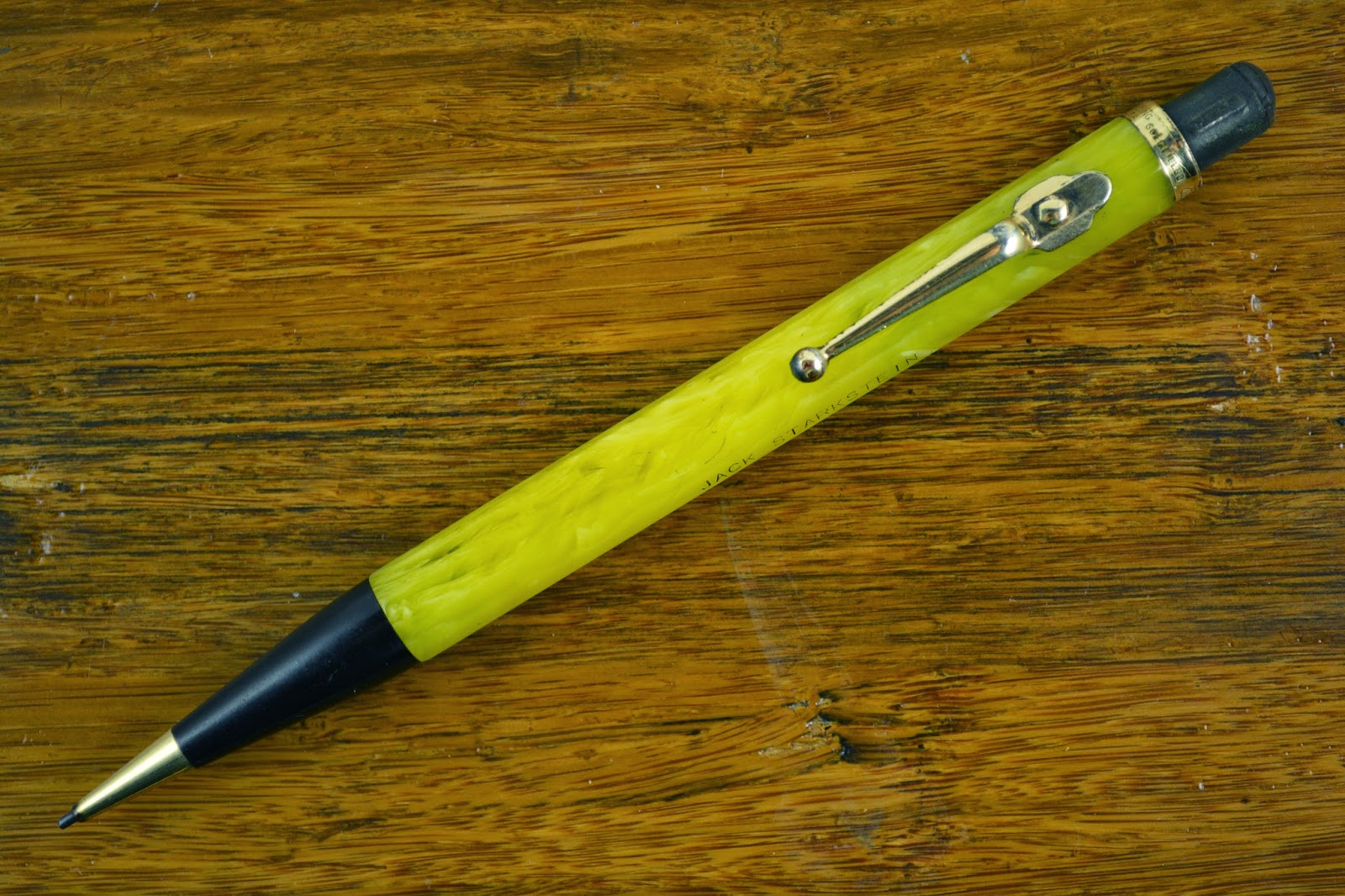 I should have taken a picture of this before I cleaned it up, because it didn’t look anywhere near this nice when it turned up in an online auction – that’s why it was so cheap. I couldn’t wait to see it next to the green one I wrote about here recently: 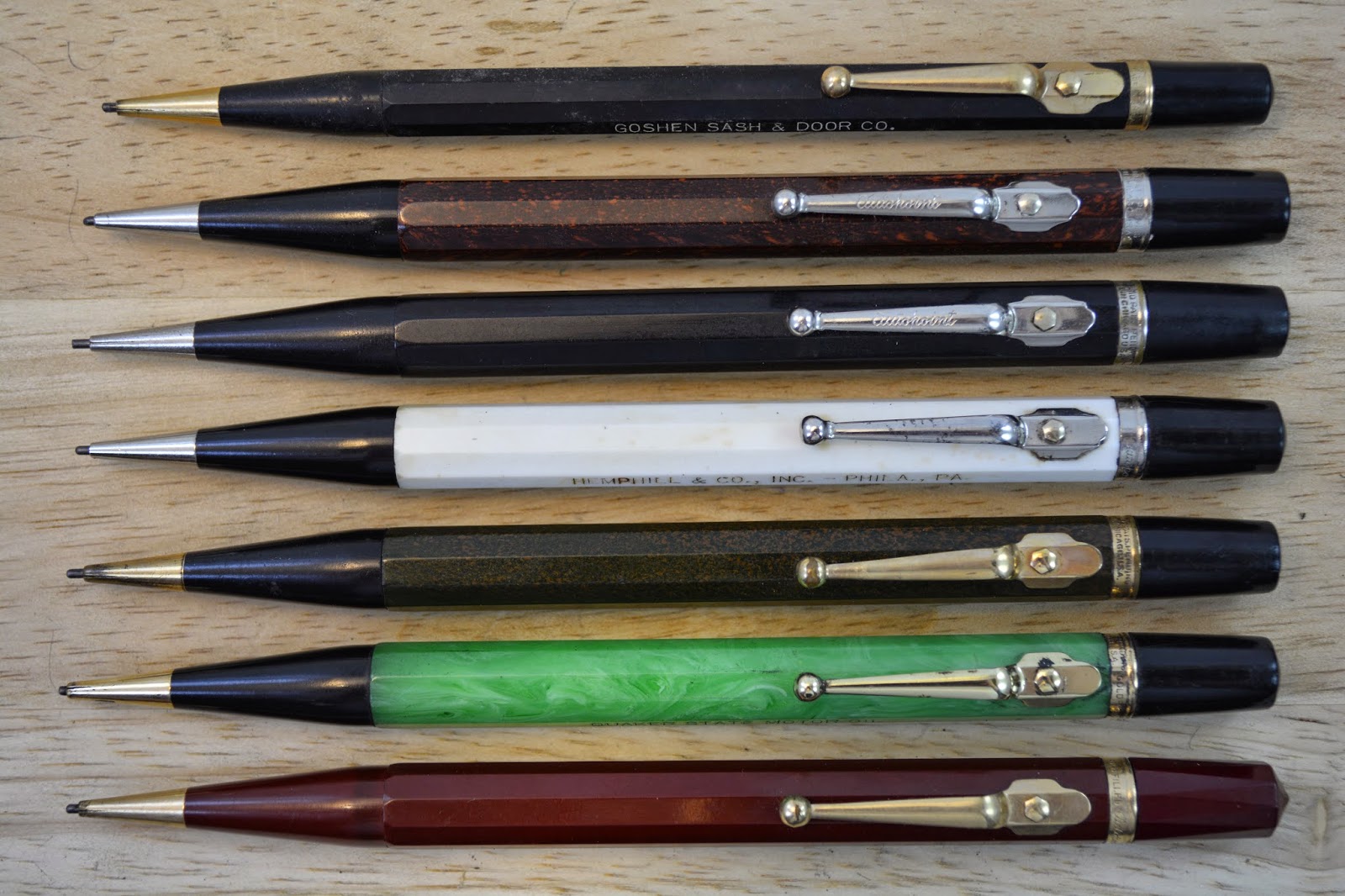 While I waited for the package to arrive and to reunite the right cap with the pencil, I tunneled farther into Sam Knechel’s collection, and I found another great Autopoint parts pencil: 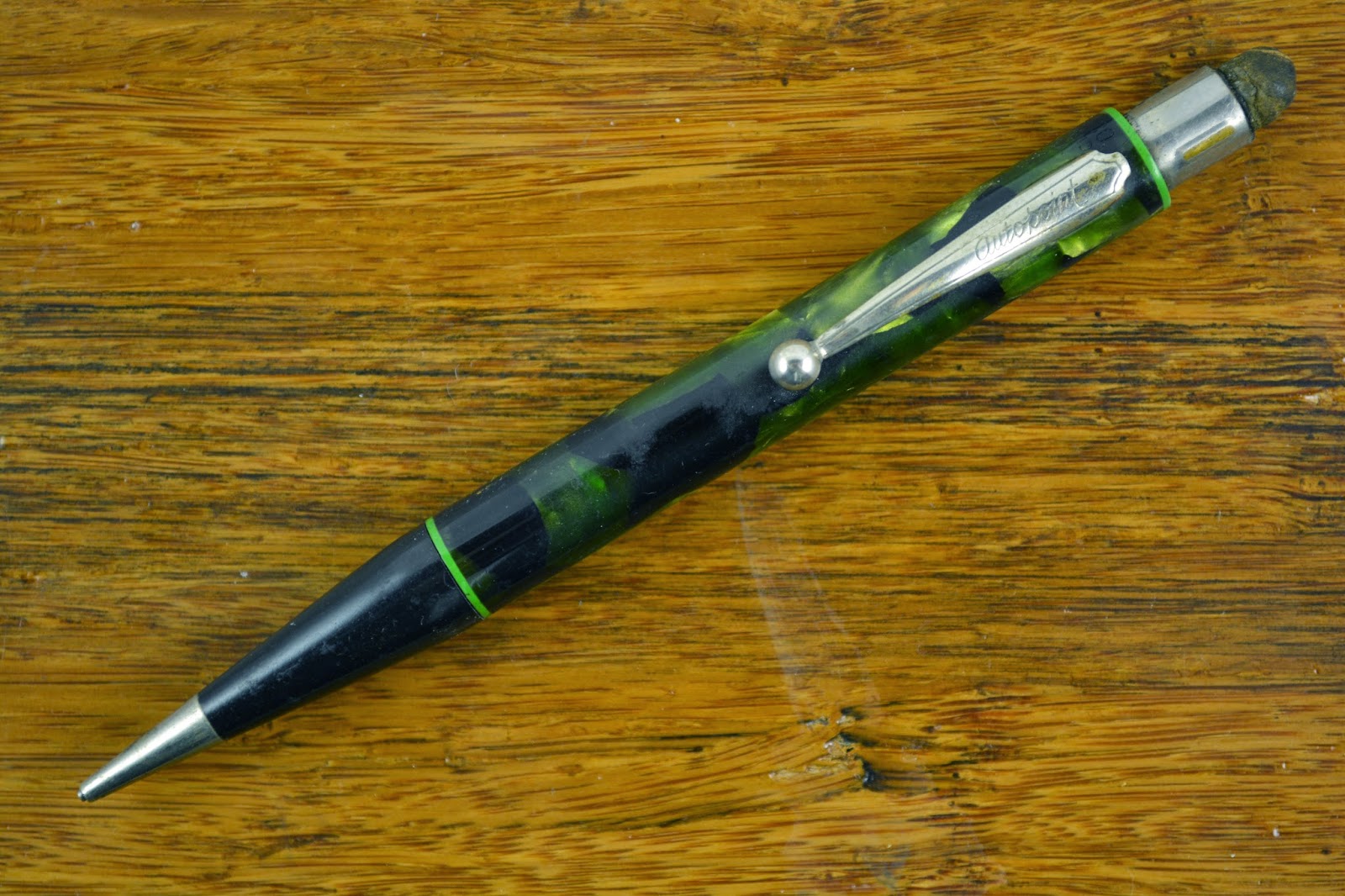 I knew I had a few more along these lines, but I couldn’t remember what the caps looked like. I compared it to the similar ones I had in the collection . . . 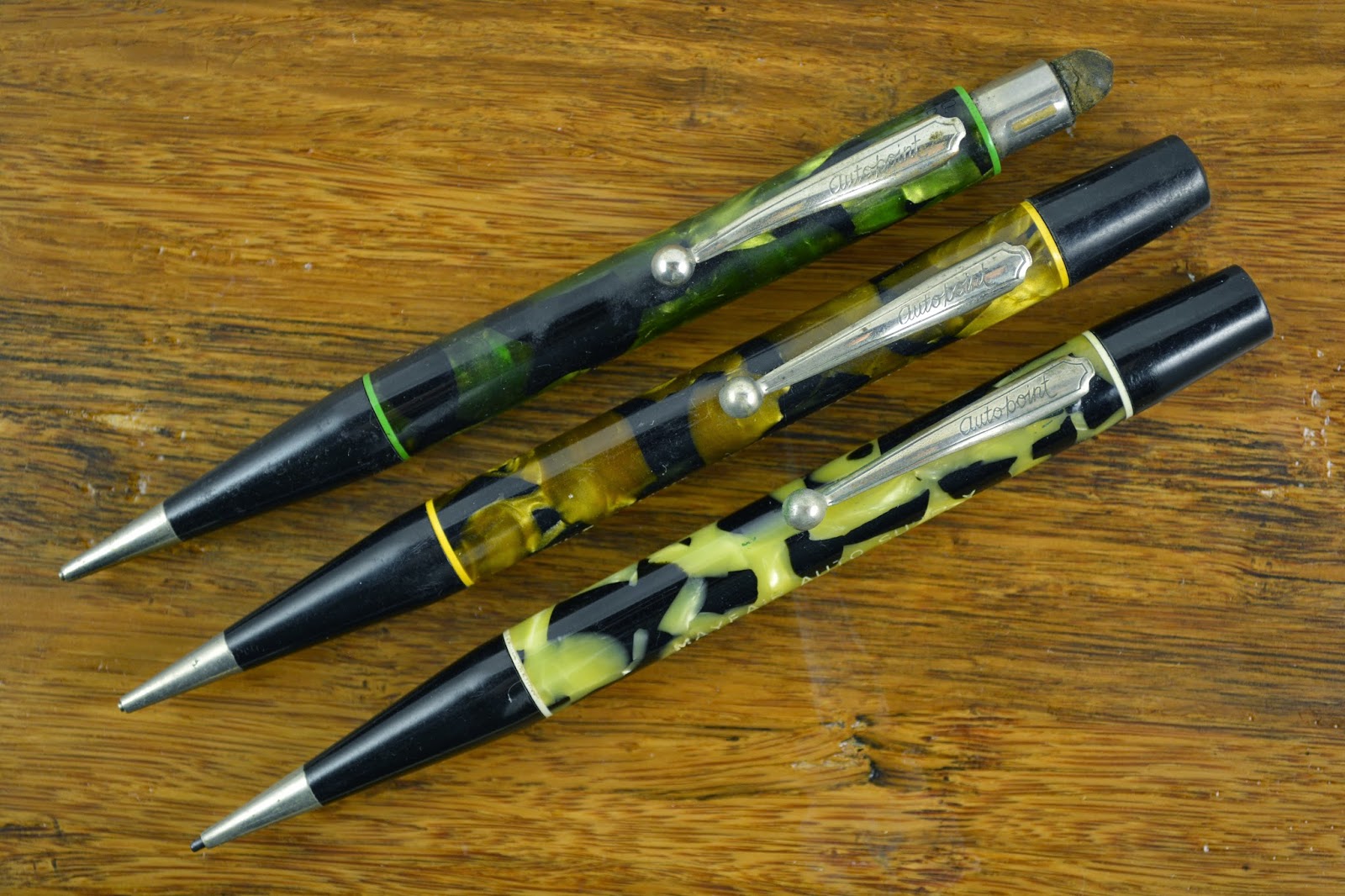 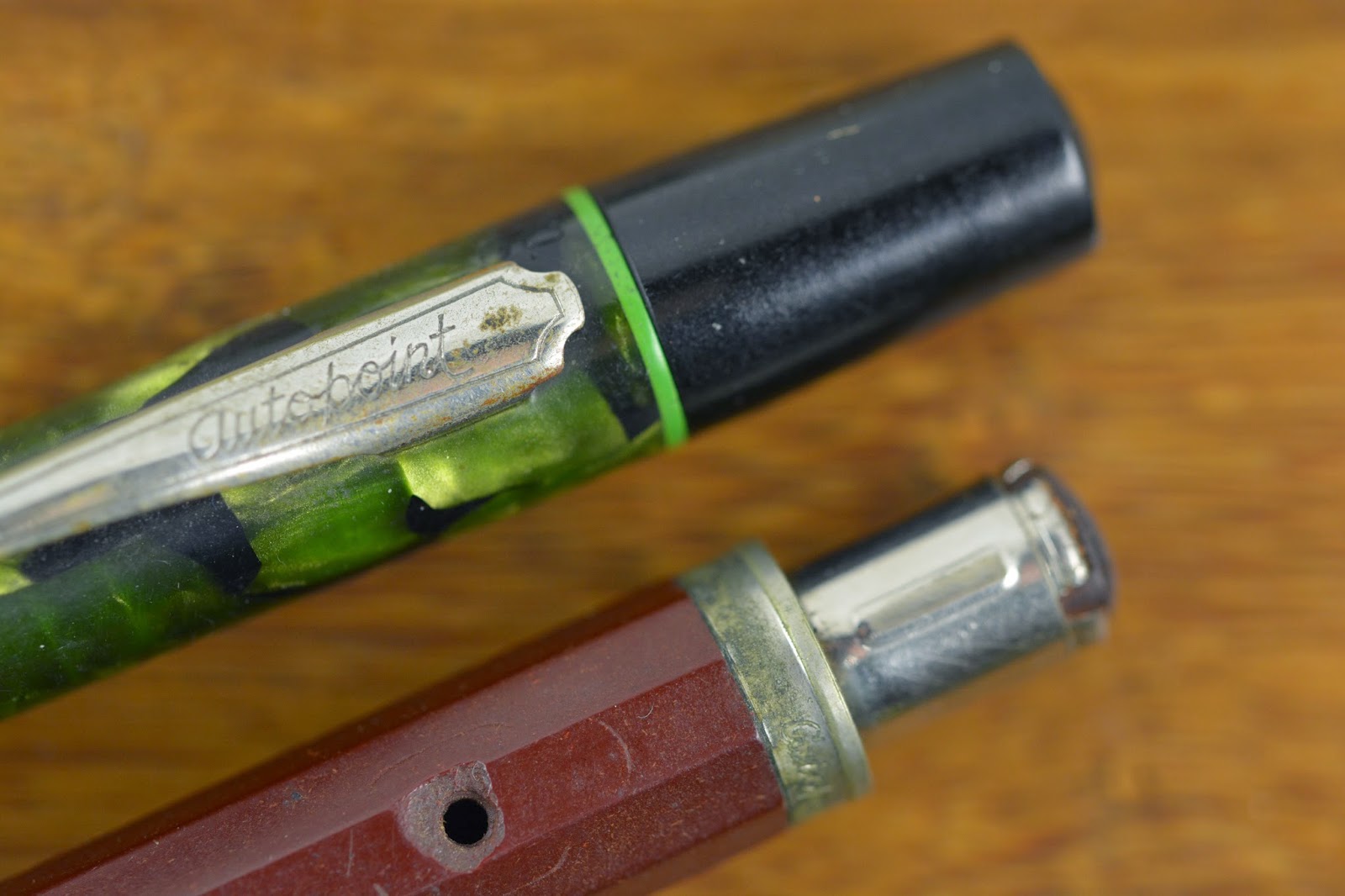 Same cap - so until another one comes along, I’m debating which looks better – this: 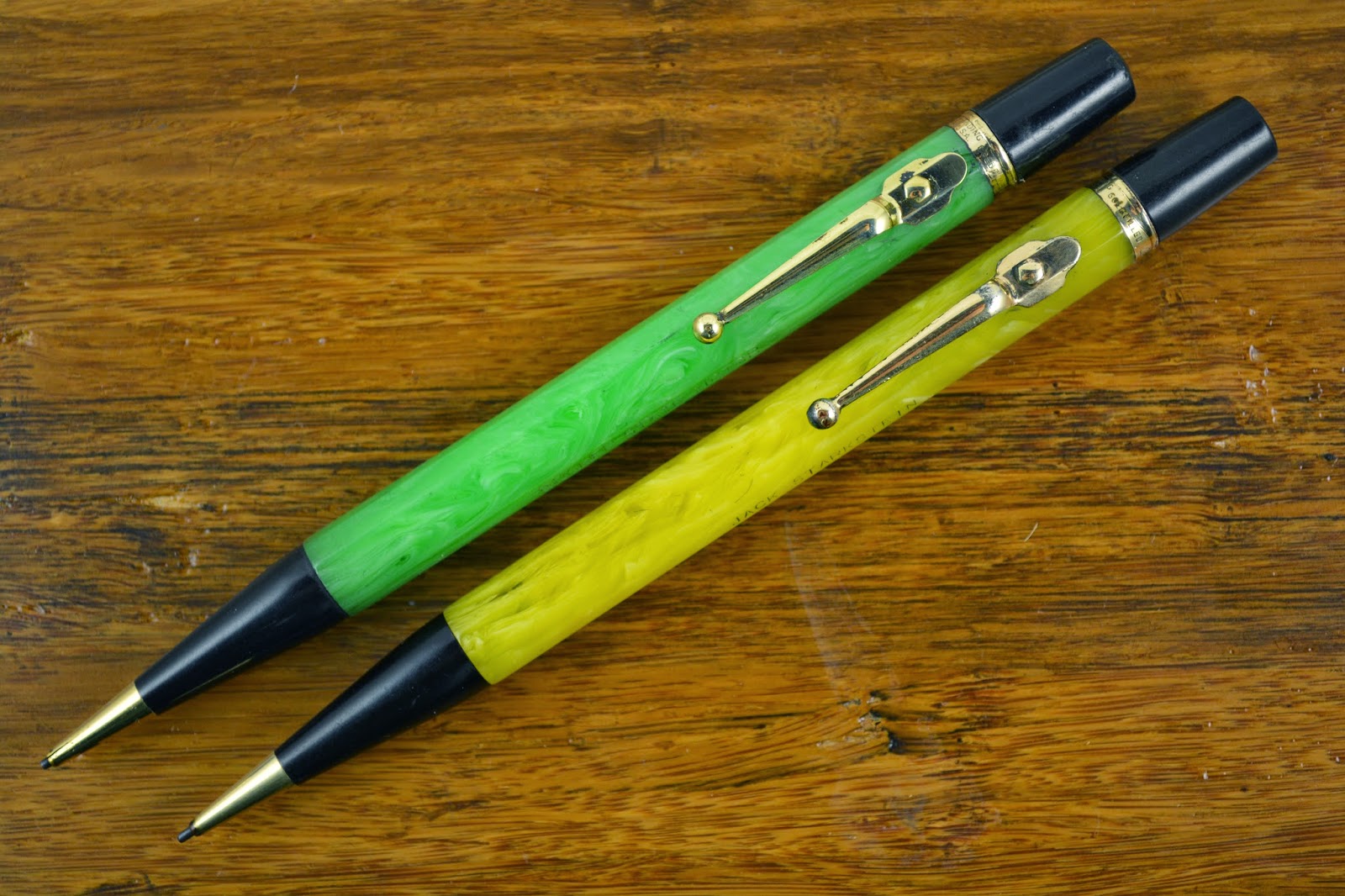 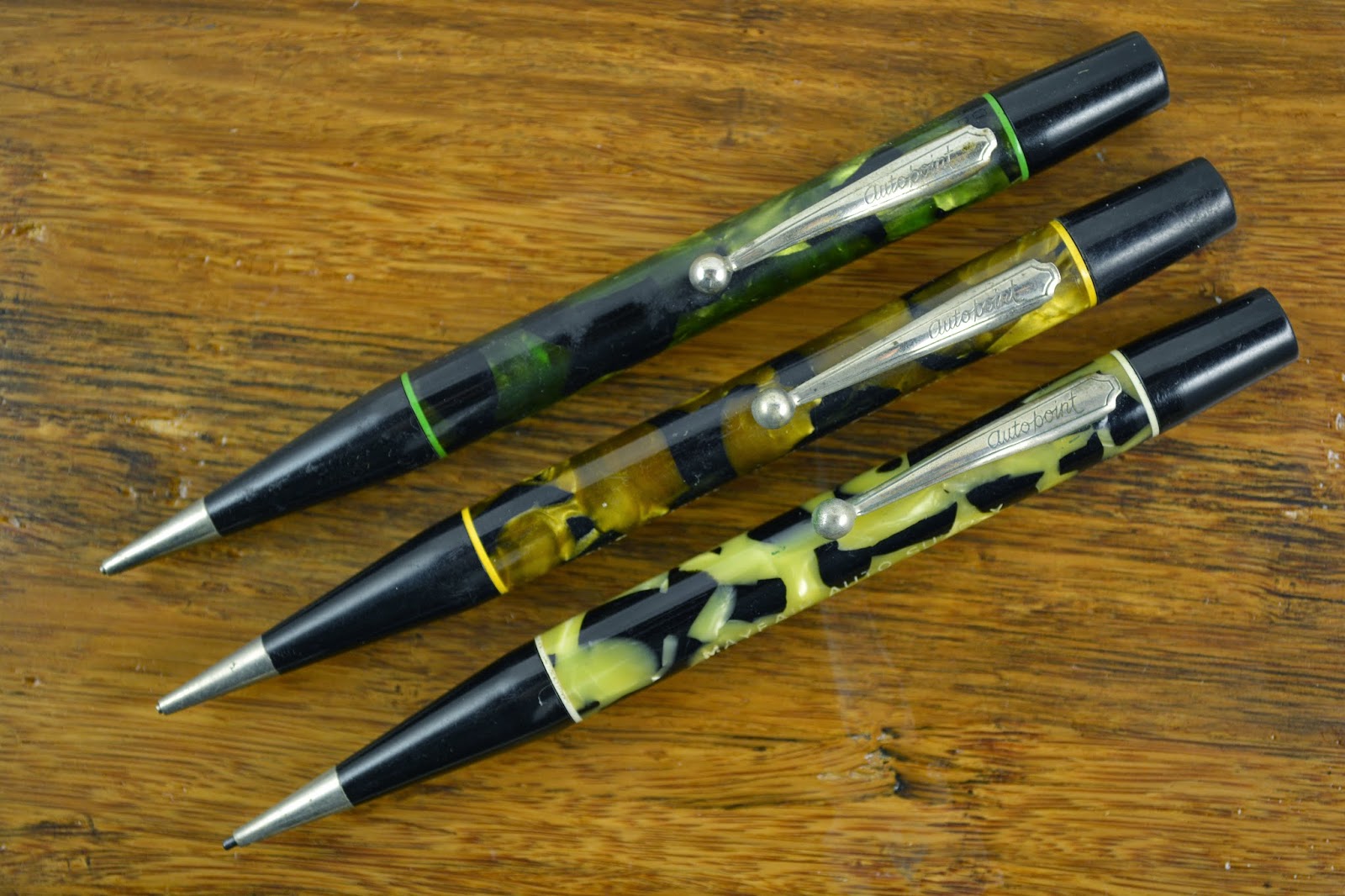 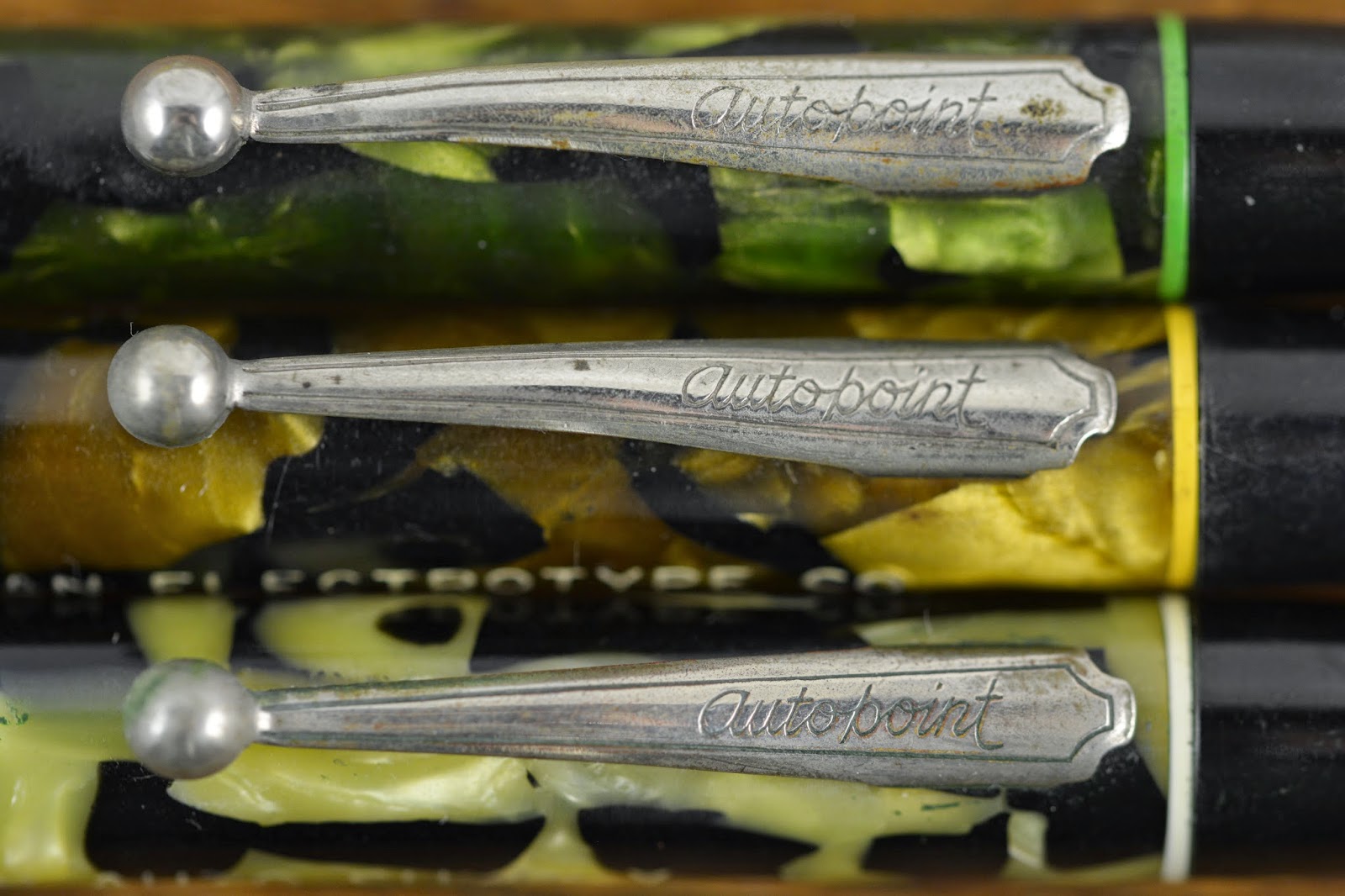 Email ThisBlogThis!Share to TwitterShare to FacebookShare to Pinterest
Labels: Autopoint