Larry Derails Me (A Little Bit)

My friend Larry Liebman bequeathed this one to me: 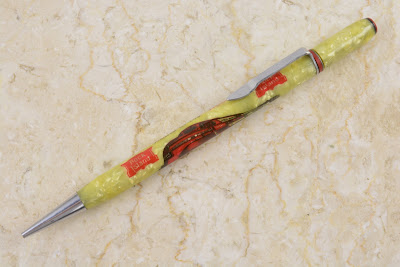 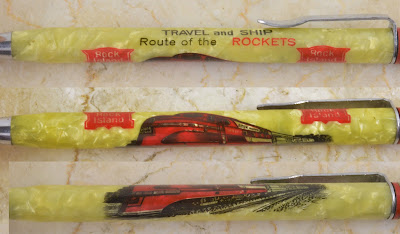 The gift was an invitation - to start a niche collection.  No, Larry doesn’t collect Quickpoints . . . at least not specifically.  What he does collect are pencils with trains on them: 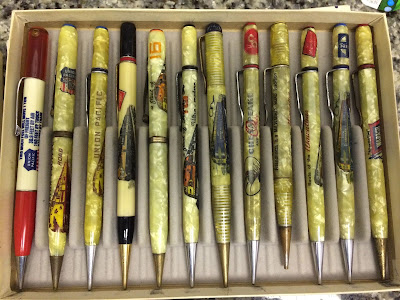 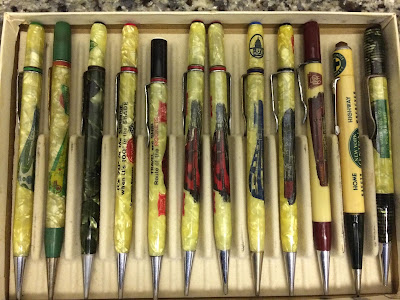 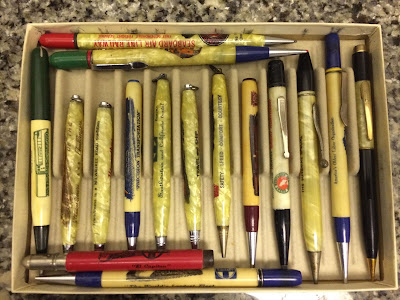 The thought is intriguing.   My collection has always been organized by manufacturer, and whatever personalization they have, whether it be a name or an advertising imprint, is incidental. Otherwise, it would be nearly impossible to navigate my way around the museum and find something . . . or anything.  I have made just a few exceptions, and each time the results have been disastrous.  There's this grouping of all of my ebonized pearl Sheaffer Balances around the super hard to find golf pencil: 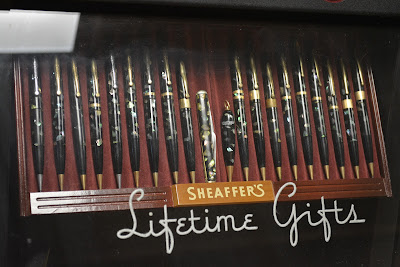 Since I had separated these from my other Sheaffers to group them by material rather than by construction, when I pulled together all of my Sheaffer special-banded Balances for a family photo I posted on facebook, I forgot to pull the ebonized pearl double band out of its special corral to join in the shot: 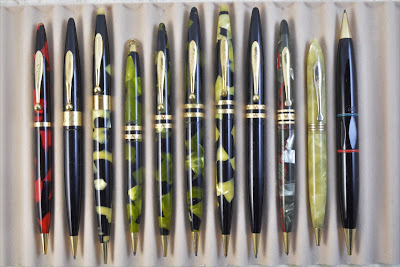 So there’s a shot I’ve got to redo.

Then there was the “Parker bridge pencil panic of 2017" – the case of a lost, very rare and very expensive pencil that I was more than a little frantic trying to find when I reorganized the museum last year.  After a couple hours of searching, I finally remembered that at some point I decided it would look nice with my other card-themed pencils (in particular, with my Parker bridge set).  There it was, much to my relief, lounging across the red suit bases: 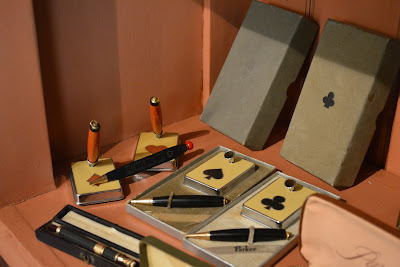 Aggravation notwithstanding, the sight of Larry’s spread of train-themed pencils did stir a question in my mind . . . I’ve got literally hundreds of advertising pencils like this, many of which haven’t been organized yet and are piled up in drawers and cigar boxes.  Like my early days of collecting Sheaffer pencils, if I see something neat I pull it aside to think about more someday, and someday hasn’t come yet.

I’m sure a cool picture of a train has generally spiked my neat-o-meter enough to throw the switch and redirect it to the roundhouse – but the roundhouse for the manufacturer of the pencil, not a newly-constructed one just for train pencils.

How many do I have with railway advertising, I wonder?

After that earworm got into my head, this Scripto Wordmaster passed into my hands, clustered together in a lot of pencils I bought for something else.  I pulled it aside, but it didn’t make it to the drawer containing my other Scripto Wordmasters.  It’s still sitting in a pretty random place, on the showcase that holds my Ruxton Multi-Vider prototypes, for two reasons . . . 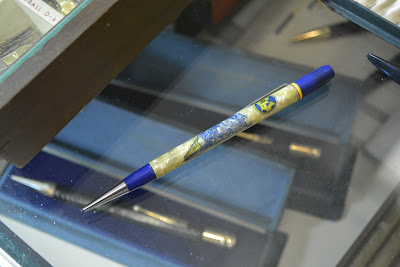 First, it has a train on it.

Second, I can't find the Quickpoint now to put them together.  After I photographed it, I didn’t put it with my other Quickpoints . . . now THAT’S a first . . . and because I didn’t, hell if I know where it is!  Apparently I took Larry's invitation to heart and put it somewhere by itself, alone in some out-of-the-way new roundhouse and waiting for other new arrivals.  I’m probably going to spend a lot more time than I care to admit going through every drawer looking for a $2 Quickpoint with a picture of a train on it.

Until I do, that Scripto is going to stay right where it is – in a random but front-and-center spot where I’ll be able to find it again when the other one surfaces.

Then, as Janet and I always say, two’s a coincidence and three is a collection.  I’m sure I have a collection at this point.  I just haven’t collected them together yet.

Thanks a lot, Larry - looks like I”ve got one foot aboard a new train.
Posted by Jon Veley at 3:45 AM

Well, I'm glad you didn't throw that Brotherhood of Locomotive Engineers pencil I sent you into one of your cigar boxes! Best of luck finding that Quickpoint.