As Kraker Neared the End of the Line

Yesterday’s article (https://leadheadpencils.blogspot.com/2018/03/unfinished-business.html) included photographs of Dixie, Monogram and Belmont branded flattop pencils, all of which were made by the Michael-George Company, and given the imprint on my Dixie, were made at least through 1929, when the company relocated to Libertyville.

A lot happened in the pen industry in 1929.  After decades of squared-off pens, Sheaffer’s new Balance line (introduced in 1928) became all the rage, leading pen manufacturers to taper the ends of their writing instruments to the greatest extent allowable by law.  Sheaffer held design patents on the new shape, which the company aggressively protected through threats and litigation, most notably the company’s lawsuit against the Worth Featherweight Pen Company - see https://leadheadpencils.blogspot.com/2017/01/the-one-pennant-rejected.html and Daniel Kirchheimer’s excellent article on the subject, published in The Pennant but also maintained by the author separately at https://danielkirchheimercom.files.wordpress.com/2017/01/featherweight-vs-heavyweight.pdf.

Michael-George was no exception, but with the Depression closing in and the firm’s bankruptcy looming ahead in 1932, it was a very narrow window of time within which the company produced more streamlined pens and pencils.

Note the differentiation between “made” in the first paragraph of this article and “produced” in the third.  Dennis Bowden’s series of articles on Kraker and Michael-George, which ended on a cliffhanger just as the company was relocating to Libertyville in 1929, documented how the company had significant tooling and was clearly manufacturing its own product until that time.  However, was Michael-George able – during the onset of the Depression – to retool and make more streamlined-looking pens and pencils?  And to what extent would he dare to do so, going head-to-head once more against Walter Sheaffer in a patent dispute?

I think the answer is that he dared a little bit, but he couldn’t retool.  I do not believe pencils like this Pencraft were made by Michael George: 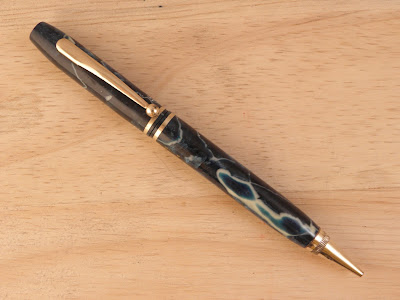 The celluloid isn’t much help in identifying who might have made it for them, since I’ve never seen this striking blue and white plastic on anything else: 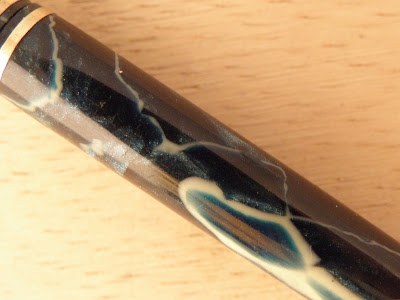 However, the imprint provides a good clue: 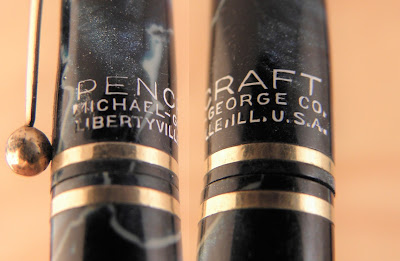 The large imprints on the lower barrels have been abandoned in favor of a block-print imprint on the upper barrel, opposite the clip.  Another company’s imprints were very similar: the Moore Pen Company.  In fact, compare the top ends of the Pencraft and one marked Moore: 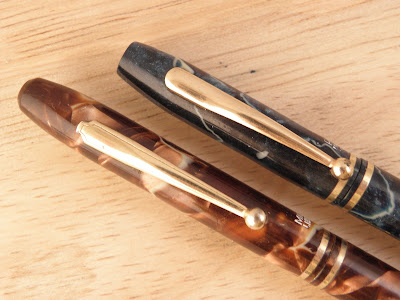 Same trim bands, both in size and in placement.  Same location of imprint.  And notice those same white swirls in the plastic, rendered in brown rather than blue.  Since Pencraft was Kraker’s flagship brand in the post-Sheaffer litigation years, is it safe to say that the Michael-George Company’s last product lines were made by Moore?

A few years back, I compared a Dixie which is similar to today’s Pencraft to a Belmont and an Eagle (see https://leadheadpencils.blogspot.com/2013/08/quite-bit-north-of-mason-dixon-line.html). 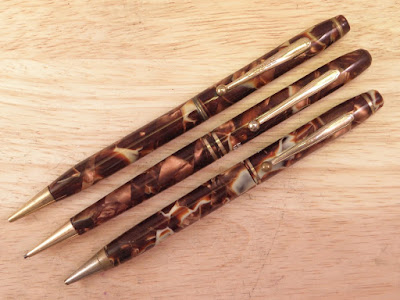 I had concluded at the time that Eagle made my Dixie . . . perhaps placing too much emphasis on the similarity of the plastic and not noticing that the clips on the Belmont and the Dixie are identical to clips used on a Moore (I also placed great emphasis on an Eagle patent appearing on a box of Belmont leads).

The confusion is warranted, because Michael-George, Moore and Eagle keep turning up together, dancing in the same very small circles.  I’d noted in The Catalogue at page 25 that some Belmonts were clearly made by Moore, and others were clearly Eagle-made: 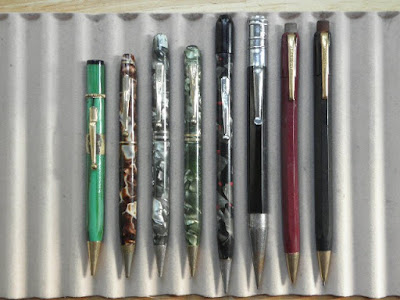 Maybe it isn’t so clear.  Earlier metal Pencraft pencils mimicked Eagle’s patented Simplex, and both of my Pencrafts are stamped “Patented” (see https://leadheadpencils.blogspot.com/2011/12/other-pencraft.html and https://leadheadpencils.blogspot.com/2012/02/eight-days-week-eagle-simplex.html).   Moore’s pens and pencils were at one time very distinct - you’d never confuse one like the one I posted about here the other day for an Eagle -- but with later Moores such as these, you easily could.

Could it be that Moore, like Michael-George, had Eagle manufacture some of its products for a time?