From Bagley through Todd - Part One

Note: this is actually the second installment in a series of articles regarding the New York manufacturers which preceded Edward Todd & Co.  The first installment was posted at https://leadheadpencils.blogspot.com/2018/03/with-couple-twists.html.

Let me start by saying one of the books I admire the most in my library is Mabie in America, by David Moak.  It is well researched, lavishly illustrated, and it’s one of the books I refer back to the most.  In fact, when David decided to part with his collection, I bought most of the pencils pictured in the book.

I will also say from the outset that everything Moak wrote about the things I’m about to tell you is absolutely correct, as far as it goes.

Moak’s book details the complete history of Mabie, Todd & Co.  The original Todd was Edward Todd, a shrewd businessman whose partnership, Smith & Todd, merged with John Mabie to form Mabie, Smith & Co. on January 19, 1856 (the name was changed to Mabie, Todd & Co. was formed in 1860).  On February 27, 1868, Edward Todd left the partnership, and another Todd, his older brother Henry H. Todd, was added so that the firm retained its name.  All of this is detailed on page 17 of Mabie in America.

After Edward Todd parted company with John Mabie, his story became something of an aside for the purposes of Moak’s book.  Nevertheless, Moak does follow up a little bit on Edward Todd’s later acquisition of Newton, Kurtz & Co. and that firm’s interesting pedigree, starting with the dissolution of A.G. Bagley & Co. on December 31, 1855.

However, since Edward Todd’s story had diverged from the focus of Mabie, Todd & Co., Moak did not fully research these predecessor firms in the same amount of detail, basing his findings solely on an examination of annual New York City Directories.  Based on that research, he presented the dates on which various firms were located at 1 Maiden Lane, as follows:

All of these names and dates are accurate – but they only reflect who was present when data was being collected by directory editors each year, and it further assumes that those editors accurately updated their records (and were given accurate information by the occupants). A significantly more detailed and precise timeline emerges from an examination of newspaper accounts at the time.

It all begins with Albert G Bagley, an early pioneer about whom I’ve written here a few times.  Albert G. Bagley, by his own account, went into business in 1839, but I could find no evidence that he was in New York prior to 1842, with what looked like a rocky start to his business: 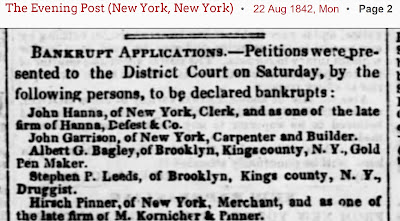 On August 22, 1842, the New York Post reported that Bagley had filed a bankruptcy petition.  On August 27, the Brooklyn Evening Star reported that his hearing in the United States District Court of New York would be held on September 29. 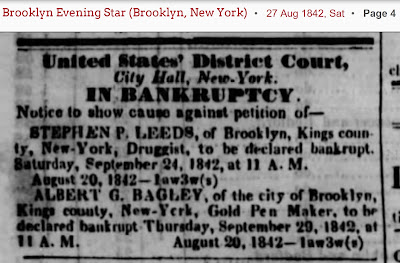 Bankruptcy must have suited Bagley.  With his creditors discharged and off his back, Bagley became a prolific advertiser in the Brooklyn Daily Eagle, beginning on October 25, 1842: 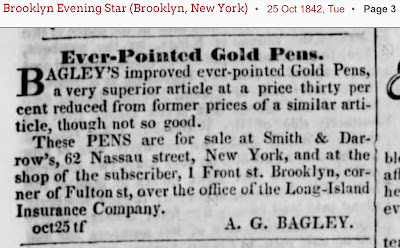 By 1846, he was advertising heavily in newspapers such as the Buffalo Commercial, and even took out a large advertisement in the New York City Directory.

Bagley had a few missteps in his personal life – most notably, taking in a 16-year-old girl who then became pregnant, causing his wife to leave him and the girl’s parents to sue him.  Bagley’s exploits are detailed in the “Manhattan Pen Makers Project” pages maintained by Richard Binder, but Binder didn’t write it (he attributes it to Ron Dutcher and unfortunately, none of the original source material is properly cited for verification).  An identical account was posted by “System of Adam” over on Fountain Pen Network in 2008, but it too appears to have been copied from someone else, probably Dutcher’s site.  It is an interesting story, which can be read at http://www.richardspens.com/?page=ref/tools/manhattan/bagleyag.htm.

During this time, Bagley also sued a former employee by the name of William Clarke on November 30, 1848, alleging that Clarke had failed to abide the terms of what appeared to be thinly veiled indentured servitude.  The appellate case, Bagley v. Clarke, 7 Bosw. 94 (1860) provides some insights into Bagley’s associations during the 1840s: 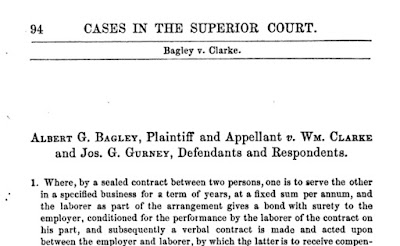 (The link to the case, so you and I can both find it, is https://books.google.com/books?id=q-cDAAAAYAAJ&pg=PA95&lpg=PA95&dq=%22Albert+G.+Bagley%22+smith&source=bl&ots=MgO5ZSK0tK&sig=xO3SWbrpFRMGBlWcmM7F7jAgCKU&hl=en&sa=X&ved=0ahUKEwiDrsSR_LvZAhUP2VMKHSKoCEMQ6AEIKTAA#v=onepage&q&f=false.)

This case indicates that Albert G. Bagley, who had previously appeared to have gone it alone, began to associate with Gerrit Smith and Edgar M. Smith in May, 1846 (the case says 1856, but that has to be a typographical error, since that would have been years after the events in the case were alleged to have occurred, in 1846).   On December 1, 1846, a formal copartnership was forged between Bagley and the two Smiths to become A.G. Bagley & Co.  By its terms, the duration of the partnership was until January 1851, but due to Bagley’s “difficulties” with his partners, it was dissolved prematurely on August 10, 1848.

Beginning in May, 1849, a frequent notice appeared in the New York Evening Post, in which Bagley warned all persons infringing his patents of his intent to prosecute to the full extent of the law.  Unless there was a grand conspiracy to pilfer Bagley’s intellectual property by the public en masse, the message appears to have been directed at the Smiths and Mr. Clarke:

Note that these advertisements contain no indication that Bagley was associated with any firm, suggesting that between August 10, 1848 and May, 1849, Bagley was again going it alone.  Beginning in October, 1849, however, Bagley’s frequent advertisements in the Buffalo Daily Republic again refer to “A.G. Bagley & Co.” and included another name, H. H. Houghton, selling “Bagley’s Gold Pens”: 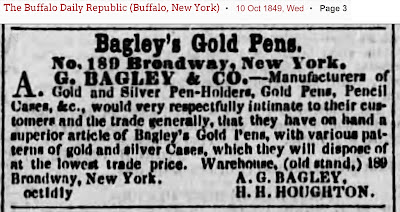 I could find nothing to indicate when Bagley became associated with Henry Harrison Houghton, but his dealings with Houghton appear to have been peaceful and prosperous by comparison.  I didn’t find a formal notice of the partnership’s establishment, but there apparently was one and it lived out its full term through December 31, 1855, at which time a dissolution notice was published, followed by an announcement that Charles F. Newton had been admitted as a new partner.  The new name of the firm would be Bagley, Houghton & Co.: 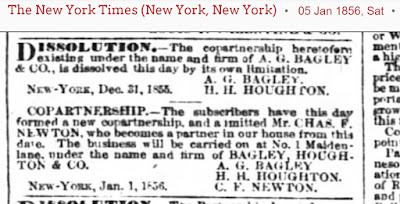 Bagley retired on April 19, 1856, and notice that the firm was dissolved and continued by Houghton and Newton under the name H.H. Houghton & Co. appeared in the May 6, 1856 edition of the New York Times: 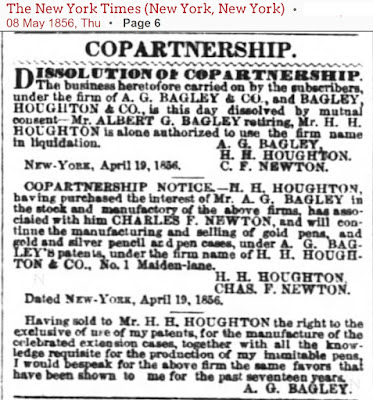 Note that at the end of this notice, Bagley indicates that he has been in the business for 17 years – that’s the only source I have that he began work in 1839.  According to the Ron Dutcher history, Bagley left for St. Louis, where he continued to make pens at least through 1870 according to census records (this tip came from a nib John Loring had in his collection marked Bagley St. Louis).

As Albert G. Bagley exited stage left, the business he established continued in the hands of numerous other characters, culminating with the day Edward Todd stepped into 1 Maiden Lane and assumed the helm.   In part two of the story tomorrow, I’ll walk you through the blizzard of partnerships formed and dissolved between 1856 and 1870.

The next installment picks up at https://leadheadpencils.blogspot.com/2018/03/from-bagley-through-todd-part-two.html.
Posted by Jon Veley at 3:45 AM