While I was putting away things at the museum, I found a couple Edward Todds that are worth a closer look: 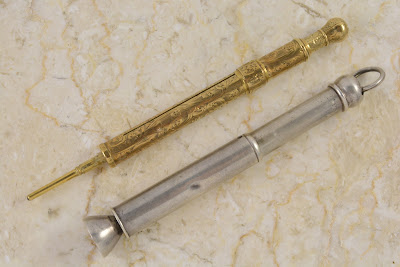 The gold example came out of a collection I picked up from Alan Hirsch last year.  It’s one of the more commonly encountered Edward Todd victorians, using the mechansim patented on December 19, 1871, which was itself a reworking of an earlier patent by Jacob Lownds (see http://leadheadpencils.blogspot.com/2016/10/lownds-redux.html for the full scoop on that one).  On close examination, though, two things set this one apart: 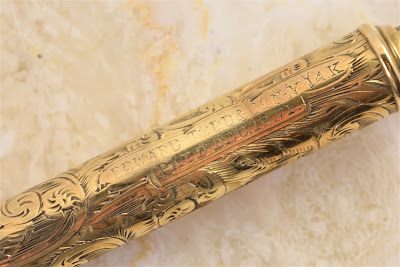 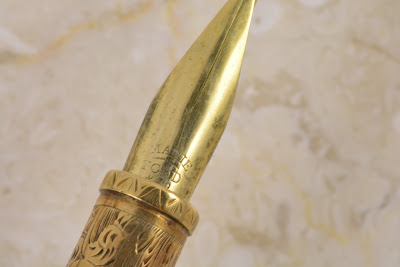 It’s 14k, and the imprint is double-stamped.

The sterling piece is a different story.  If it doesn’t quite look like a pencil, you’re right.  I picked it up because it had an Edward Todd hallmark and a weird patent date, two things that always grab my attention: 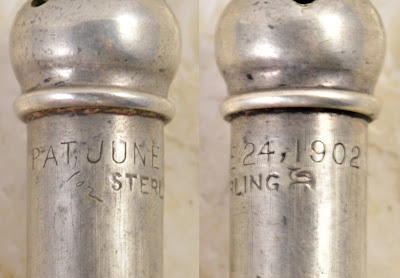 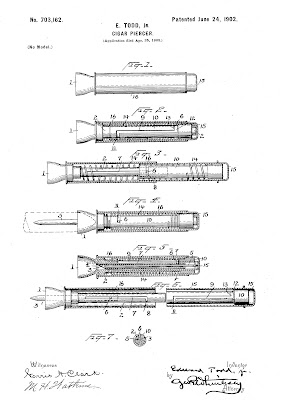 An Edward Todd hallmark on a cigar piercer illustrates one of the problems I faced in writing American Writing Instrument Trademarks 1870-1953.  If I didn’t limit the scope of the book to those trademarks which were filed specifically with respect to writing instrument, there wasn’t any way to limit the scope to marks relevant to our field.  I didn’t want to fill the book with  jewelers’ trademarks on the off chance that a jeweler might have stamped his name on a pen or a pencil.  The example I discuss in the book of a mark which wasn’t listed is Eisenstadt’s trademark within a carpenter’s square, filed under a wide variety of items – but not pens or pencils

Edward Todd’s distinctive hallmark is another such exanple.  There are six Edward Todd trademarks in the book, none of which covers this mark.  Finding that needle in a haystack would send me back to the patent indices, searching first for marks registered by Edward Todd, the individual, and if that didn’t work, under every category of goods the company made.

The exercise may well prove to be a wild goose chase, if Edward Todd never sought Federal protection for his hallmark.  And I think that might be the case.

The Appendix to American Writing Instrument Trademarks 1870-1953 includes the writing instrument-related sections of Trade-marks of the Jewelry and Kindred Trades, published in several editions.  The Edward Todd mark is not shown in that section, so it isn’t in the book – however, I did find Edward Todd’s hallmark in the section for “sterling silver”: 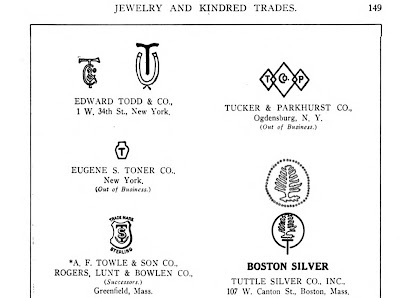 Note that the entry beneath the Todd mark for A.F. Towle & Son Co. Has an asterisk before it.  The legend for entries in Trade-Marks of the Jewelry and Kindred Trades indicates that an asterisk denotes those marks which were registered under the Federal system.  If that’s true, then no registration was filed for Edward Todd.

I learned in the course of researching my book that Trade-Marks of the Jewelry and Kindred Trades wasn’t always accurate in this respect, but it’s a fair indicator that the odds are against finding a mark if I plunged myself down that particular rabbit hole looking for one.