I picked all three of these up at the Ohio Show last month: 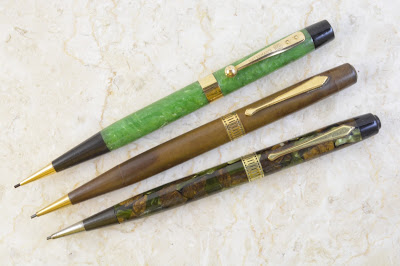 The top one in jade is one of those interesting later “closeout” Patricians, made when the company had apparently used up its stock of normal Patrician clips and switched to some earlier “clip cap” clips - Dale Beebe had this one.  The center bands with cutouts were apparently all used up by this point, too.  I’ve written about these before here (see http://leadheadpencils.blogspot.com/2013/06/the-waterman-96.html), but unlike the other one I had at home, this one lacks a “996" imprint.  I know, it’s just a slight difference . . . but this thing was just so pretty, and even if it was identical I probably would have bought it anyway. 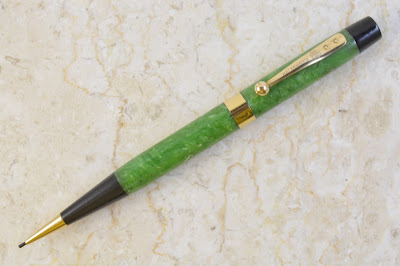 The middle one is a black hard rubber Patrician, with a badly oxidized barrel.  Paul Erano had this one, and I was actually looking for one with this oxidation.  Nowadays, a quick treatment with Mark Hoover’s hard rubber cleaner and this one could be black as new, but I kind of wanted on that I could tell apart from my black celluloid example without doing the old “rub and sniff” routine: 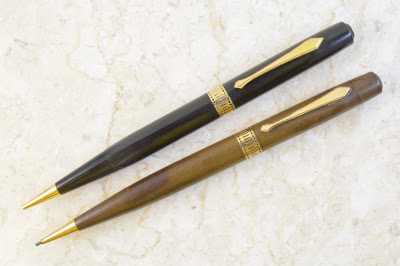 As for that “forest green” one . . . well, I didn’t exactly pick up three.  Rick Krantz brought it to me for repair at the Ohio Show, and when I got started on it, I noticed that this one didn’t have a “normal” Waterman Patrician tip; instead, it had one matching the Number 7 line (and a host of lesser and later Waterman pencils).  I fitted it with a spare nose cone I had with silver trim, and when I got home, I made a more permanent swap with a proper gold filled one: 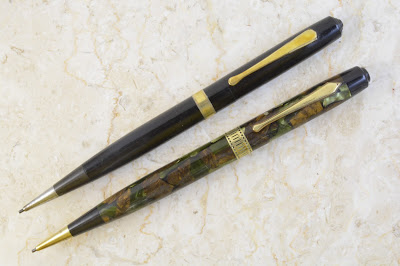 I left it with Rick that I had a spare forest green Patrician at home that I’d trade him for this one, but now I’m in a quandry.  I assumed the one I had at home was “normal,” but it isn’t: 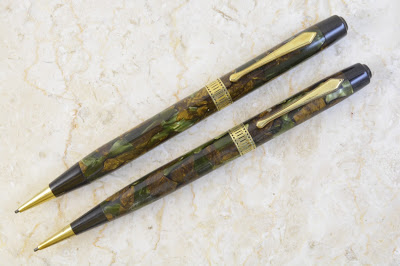 Note that this has a similar, shorter tip . . . but this one is a little wider, and it doesn’t match anything else in my collection of Watermans: 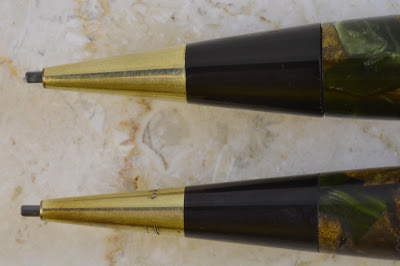 And so, I resorted to my projects box, where I had another forest green one I thought I could repair and send back to Rick.  Alas: 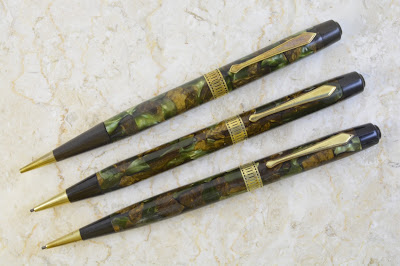 Crap.  A normal tip.  And I certainly can’t trade him back that great Patrician/94 hybrid he sold me a few years ago in Philly! 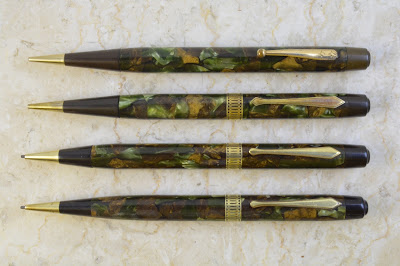 Four forest green Patricians, four different variants.  I suppose for now, Rick gets his original pencil back, since it’s the least different one of the four . . . but if I can find an example that’s a duplicate of any one of these in the near future - I’ll pick it up for Rick!
Posted by Jon Veley at 3:45 AM