It’s not often that you’ll run across a clutch pencil made by The Frank T. Pearce Company, so I was delighted when this one turned up in one of Rob Bader’s boxes ‘o fun at the Raleigh (Triangle) Pen Show this year: 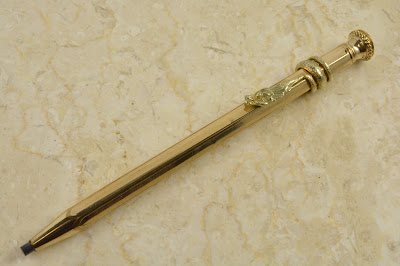 Pearce pencils are easy to spot thanks to those prominent knobs around the crown, and the fact that they are usually adorned with snake clips.  A while ago I wrote about George T. Byers’ unsuccessful attempt in 1914 and 1915 to steal Pearce’s clips by taking out a design patent on the same clip, using identical blanks he procured from Pearce’s supplier (see “The Snake that Wasn’t Wrapped Around the Pencil” on March 16, 2015 at http://leadheadpencils.blogspot.com/2015/03/the-snake-that-wasnt-wrapped-around.html).

Snake clip and knobbies aside, verifying that one of these is a Pearce usually takes a loupe to find the company’s logo, which is usually found on the side of the crown: 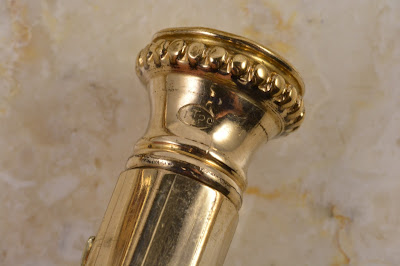 It’s been several years since I last wrote about the F.T. Pearce Company, when I first learned that the circle around the “FTP” is actually the “C” in Co. (see “It’s Not File Transfer Protocol" at http://leadheadpencils.blogspot.com/2012/01/noits-not-file-transfer-protocol.html).  One of my readers recently questioned how I knew this to be true, so I went back and found chapter and verse – here’s an advertisement from the mid-teens (I’ve long since forgotten where I found this):

The example I picked up from Rob was a little worse for wear, with a couple dings and a significant amount of plating wear on the edges of the faceted barrel, but it shined up pretty nice and there were a couple of things I found interesting.  First is that I haven’t seen one with a plain, faceted barrel, and this one was a little bigger than what you usually find.  Here it is next the two examples from that early article I wrote: 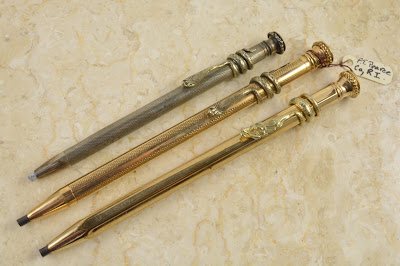 But notice also that this isn’t the usual snake clip you’ll find on a Pearce: 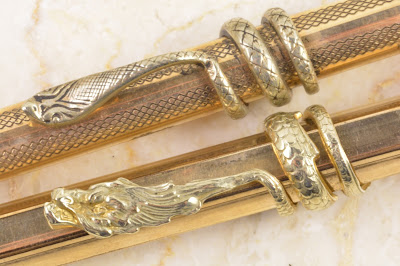 This one has an ornate dragon clip rather than a snake - it’s the same clip that turned up recently on a leadholder marked Salz Bros.  (see “Better than the Real Deal” at http://leadheadpencils.blogspot.com/2013/09/better-than-real-deal.html): 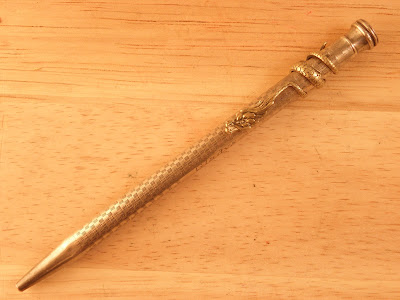 The dragon clip is an accommodation clip, meaning it can be slipped off of the pencil.  That means at some point over the last century someone may have replaced the clip with which this Pearce was originally fitted – if it was ever fitted with one at all – with a dragon clip from something else.  But I do find it odd to find a clip so similar to what you’d expect to find on a Pearce installed on a Pearce that had been so neglected.  I was left to wonder if Pearce switched to a different clip while the patent litigation was pending.   It would be nice, I thought, to be able to establish conclusively that Pearce ever used clips other than their famous snake clips.

And then, as these coincidences so often happen, something popped up in an online auction right after I got home from Raleigh . . . .

Email ThisBlogThis!Share to TwitterShare to FacebookShare to Pinterest
Labels: Pearce