Closest to the Source?

Note:  yesterday's post contains a short anatomy lesson regarding early Ever Sharp pencils, which helps explain why I'm so excited about this one.  The post can be found here.

At the Chicago Show this year, George Rimakis came to me with a part he’d turned up in someone’s junk box, and which he knew I’d find interesting: 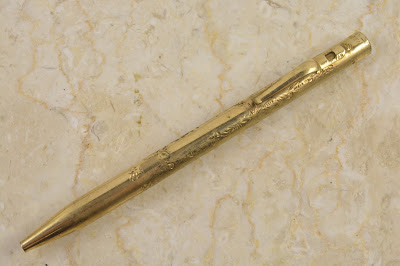 The clip indicates this is a barrel from one of the early Heath-made Ever Sharp pencils, made between late 1913 and October, 1915, when the Wahl Adding Machine Company began making the pencils for Charles Keeran under contract. 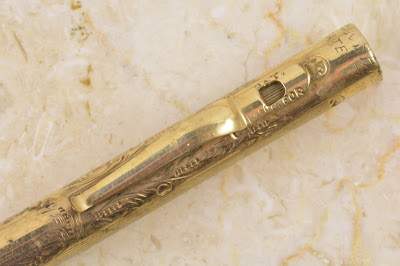 Early Ever Sharps are a passion of mine, and regardless of whether I’ve got a duplicate at home, I always pick them up in the hopes that I might learn something more about these rare pencils.

This time I did.

My first order of business was to install a mechanism and a metal tip so that this would be a working example rather than just a part, and since I happened to have a first generation Eversharp on hand as a donor, I pulled the mechanism and installed it: 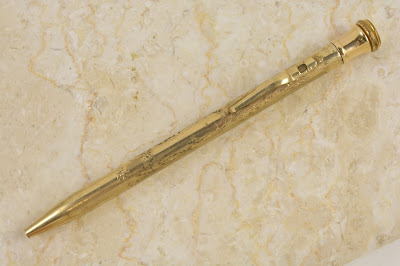 But when I set about installing the tip, something odd happened.  There was nothing into which I could screw the tip . . . in fact, there wasn’t anything in there at all: 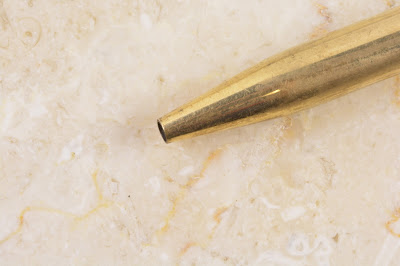 I’ve never been so excited about a pencil that I couldn’t get to work.  It has to do with those very, VERY first Eversharps . . . the ones no one has been able to turn up yet.  This barrel has no metal funnel at the front end – prodding with a trusty paper clip confirmed there’s nothing in the front end of this barrel until you feel the lip of that straight, threaded insert.  There’s no way that funnel fell out by itself because it’s held in place by the threaded insert.

Now, I suppose it’s possible that someone took a perfectly good Heath-clip Ever Sharp worth a couple hundred bucks, melted the solder that held the threaded insert in place, extracted it, hacked off or otherwise removed the metal funnel, reinserted the threaded tube, soldered the insert in place, and then cast off the barrel into a junk box.  That would be the only way to get a front end out of one of these, and I think that’s unlikely.  Call it “junk box provenance.”

What I believe is far more likely is that the “fibrous” plugs in those very first Ever Sharps, which needed to be soft enough to both secure the lead yet also allow it to ease through, must have been made of some material which was prone to shrinking.  It wouldn’t have to shrink much to be narrower than the inside diameter of that threaded insert – and if it shrank, the plug could fall through the insert and out of the pencil without the insert being removed.

If that theory is correct, that might well explain why no examples of Keeran’s first Ever Sharps have yet been found.  If the plugs shrank, even if the plugs didn’t fall out, they would have constricted so tightly around the lead that the pencils would be inoperable.  There would have been little point to keeping a pencil that didn’t work.

I examined the barrel more closely to see if there was anything else about it that was different from the other Heath-made Ever Sharps in my collection, and there’s one other telling detail that supports my theory.  The imprint is stamped much higher than it is on the other examples I have; in fact, it trails off the very end of the barrel, as if it was an afterthought: 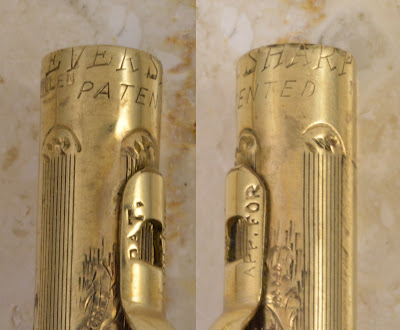 As David Nishimura established in an article he posted over at his blog (see “Who Designed the Eversharp Pencil” at http://vintagepensblog.blogspot.com/2013/12/who-designed-eversharp-pencil.html), the first Ever Sharps were made by Heath by retrofitting Heath’s clutch pencils:

Heath imprints were much smaller and closer to the tops of the barrel, with “G.W.H.” usually stamped on the mechanism inside, exposed only when the top is unscrewed.  A two-line “Ever Sharp / Patented” imprint stamped on a repurposed Heath clutch pencil that was already engraved, wouldn’t quite fit.

The search continues for an early Ever Sharp with an intact “fibrous” tip, to see what material was used and verify what I believe to be true – that as of the writing of this article, this is the earliest known example of Charles Keeran’s Ever Sharp pencil.

Any hints as to what the 'fibrous' material might have been Jon? It makes sense that it was replaced as the product matured with a more reliable system for creating the resistance needed, but it's super cool you found that!

Hello Peter - I have always thought "fibrous material" meant wood. We'll have to see what others come up with. The Eagle Simplex used a very similar system.

Great info Jon. I never delved into what tips are on mine.
I'm away for the San Francisco Pen show already but when I get home I will look at my Kerran/Heath pencils to see if I can be of any help on this topic.
Syd