I picked up all three of these pencils at the Triangle Pen Show in June, two from Brian McQueen and the third from Rick Krantz: 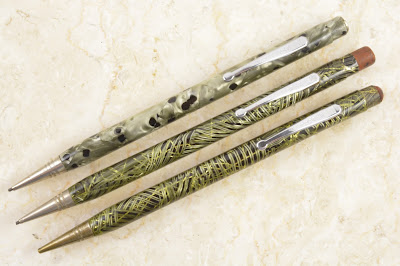 All three of these are Eversharps: 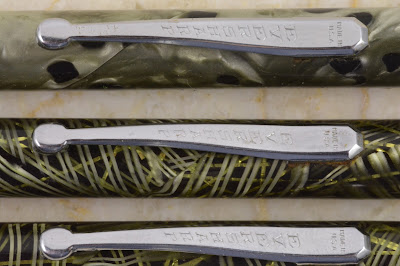 I call them “Square 4 derivatives” because they are descendants of Eversharps “Square 4" line, originally designed for use with leads that were 4 inches long and square, purportedly to keep them from twisting around in the barrel and also to keep sharper points as they wore down (see “Hip to be Square” at http://leadheadpencils.blogspot.com/2012/05/hip-to-be-square.html).   Square lead quickly proved to be a fiasco, as the corners tend to shave off inside pencil barrels and gum things up, but the 4 inch lead thing did catch on, so Eversharp streamlined the design a bit.

I’ve got a picture of a few Square 4 pencils on page 71 of The Catalogue, although I was off a bit on the date they were introduced (I indicated 1937 - the patent for the square lead was applied for in 1932).  I mentioned in the book that you can assemble quite a collection of these, since they came in such a wide variety of colors and patterns, and I’ve added quite a few since the book was written of these later models: 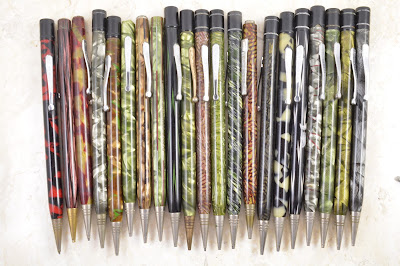 The plastics on these new additions, though, are really interesting.  The grey one is made from a plastic I’ve only ever seen used on Sheaffer WASP pencils (“WASP,” an acronym for W.A.Sheaffer Pen, was the company’s lower-tier line of writing instruments).  Some call it “Screaming Souls in Purgatory,” but I prefer “birdseye.”  Sheaffer was even more sedate, calling it simply “gray.”  Here’s a Wasp Clipper pencil in that same plastic: 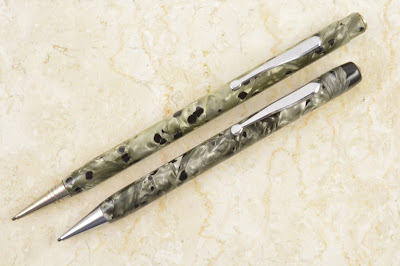 The green examples are also made from a plastic I’ve only seen on WASPs before - Sheaffer called this one “green lahn”– here’s a WASP from that same series in that same color: 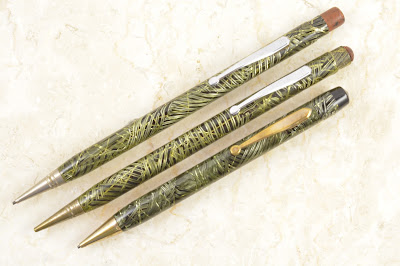 That WASP isn’t the best example of the plastic, since it’s a little less dramatic than what you normally see.  Here’s three WASP Clippers of a little later vintage, in silver, green and brown lahn: 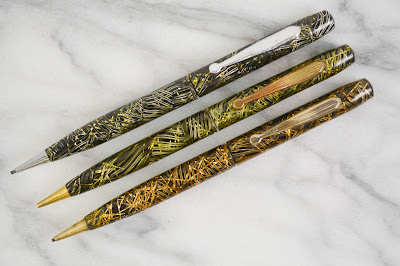 The lahn plastic was patented – but not by Sheaffer.  Patent number 2,081,538 was applied for on June 26, 1934 by Fred J. Hoarle and was issued on May 25, 1937.  The patent was assigned to the Celluloid Corporation and not to Sheaffer, for a process of embedding little metallic strips into decorative celluloid. 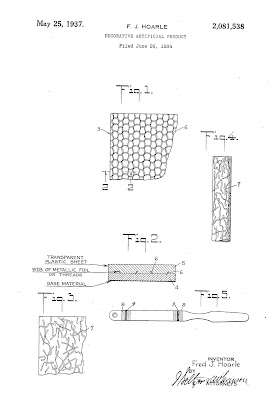 Sheaffer didn’t always have a lock on the distinctive patterns found on its products, and we’ve seen other Sheaffer colors “leak” out to other manufacturers (most notably, the blue “clown” plastic which has shown up on Ford’s Jr., Realpoint and Rite-Rite pencils).  But this is the first time I’ve seen a leak from Sheaffer to Eversharp.

And, as I’m writing this, another online auction is about to close with another Eversharp in gray birdseye.  Where are all of these coming from at once?
Posted by Jon Veley at 3:45 AM