Last fall, I arranged to meet Margaret Jacoby at a quaint restaurant in Yellow Springs, Ohio to pick up the rest of Don Jacoby’s pencil collection (of “Penguins in the Barnyard” fame from Volume 6 - see pages 205 and 245).  Since the plan was for me to bring them back to Newark and go through them so I could make a fair offer, I had anticipated that Janet and I would meet her for a nice brunch, then transfer Don’s collection from the trunk of her car to mine.

I anticipated wrong - in walked Margaret and her two adult daughters, laden with shopping bags full of Don’s pencils.  Margaret intended to give me the guided tour of Don’s collection over lunch; in retrospect, I think she and her daughters wanted to see how tickled I would be as she pulled tray after tray of pencils for me to view.

Tickled, I was.  Dumbfounded, I suspect the wait staff and all the other patrons around us were.  Amused and patient as always, Janet was.

Don had quite a few nice things I’ll be writing about in upcoming articles, but most of it (Margaret and I had already discussed this possibility and it proved true) was inventory – fun things I’ve already got that will eventually be rehomed with fellow enthusiasts.  Then there were the things that reminded me of what I’ve meant to write about, and just never gotten around to, like this ringtop: 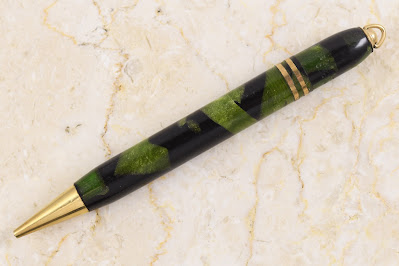 I think I blurted out “ooh, I’ll bet that’s a Weidlich” when it emerged from a display tray, which turned out to be right.  My guess wasn’t too much of a stretch of the imagination, since Don and Margaret hail from the Cincinnati area.  Still, if anyone within earshot had any doubts whether I was a nerd . . . well, question answered, suffice to say: 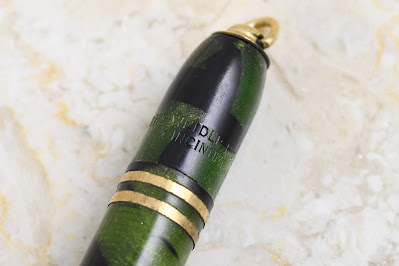 I knew what it was because I’ve got the matching full-length version of that same pencil, and it reminded me of an article I’ve been meaning to write: 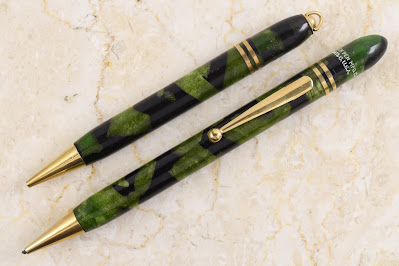 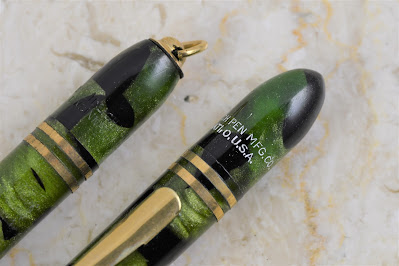 Before I dive headlong down that rabbit hole that is the article I've been meaning to write, I’m due to write something about the Weidlich Pen Company, especially since it hails from my native Ohio.  Here’s another pencil I’ve attributed to the company: 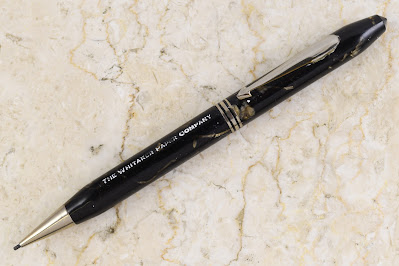 Pens with this clip often bear Weidlich imprints (and to my knowledge, no other manufacturer’s imprint), but the pencils are never marked.  I’ve let a few arrivals slip from my grasp over the years, but now that I’ve settled on the notion that this clip appears to have been used only by Weidlich, I’ve become more stingy with them.  I highlighted the imprint hoping for a smidge of illumination, but this one is just a simple advertisement for the Whitaker Paper Company, which doesn’t appear to have had any connection with the writing instruments trade. 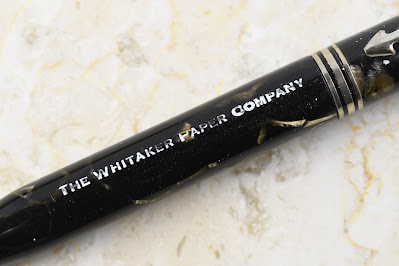 Otto Emil Weidlich (one source reports he was born in Germany in 1851) went into business in the late Nineteenth Century.  “linearM” on the Fountain Pen Network suggested that he founded a pen firm in Cincinnati in 1889; the earliest reference I could find to his pen company was a brief announcement in The American Stationer on November 19, 1891. 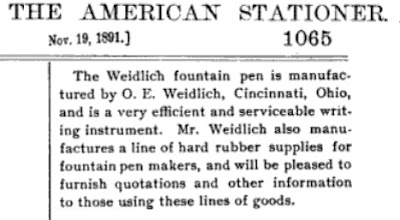 Weidlich ran a humble advertisement in The American Isrealite, a Cincinnati newspaper, on June 9, 1892.  His factory was at the corner of 5th and Sycamore in downtown Cincinnati:

Weidlich’s enterprise gained steam, and by the end of the century his advertising illustrated finely crafted pens.  This advertisement appeared in the New England Stationer and Printer in March, 1899:

On June 19, 1910, the Cincinnati Enquirer announced that Ed M. Simpson, formerly of Simpson & Keller (a druggists’ sundries firm), had acquired a ½ interest in O.E. Weidlich’s pen company for $50,000.00 – a staggering amount of money at the time. 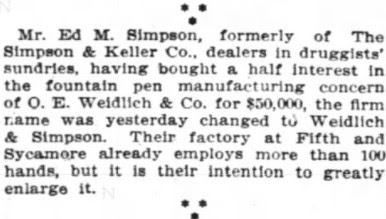 On August 21, 1910, “Weidlich & Simpson” advertised its “Simplofiller” fountain pens at the same 5th and Sycamore address: 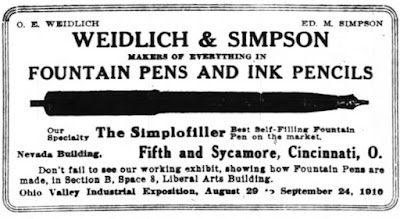 That same day, The Cincinnati Enquirer profiled the new firm.  The article states that “for 60 years Cincinnati-made gold pens have had a national reputation,” but clearly that was a reference to John Holland, who had been in business far longer.   The Simpson & Weidlich Pen Company was formally incorporated in 1911, as announced in the April 1, 1911 edition of The Bookseller, Newsdealer and Stationer:

From what I can tell, Weidlich made a huge mistake getting into business with a guy like Simpson, although at the age of 60 or so he might have been thinking about retiring.  Simpson was a wheeler and dealer with a checkered past in stock trading: in 1909, he was sued by a former investor who claimed he promised to buy back the stock that he sold to her, with interest – a promise that was broken when the company folded: 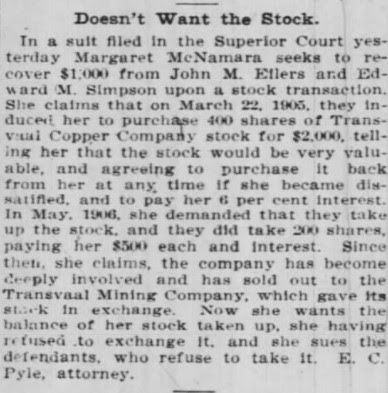 A similar scheme involving Weidlich and Simpson’s stock was revealed in February, 1912: Ms. Sadie Christy claimed that she had invested in the company, and Simpson, aided by accomplice Frank W. Roberts, caused the shares purchased with her money to be registered in Simpson’s name. 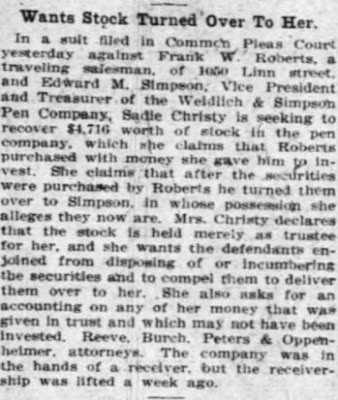 Poor Otto’s life was falling apart.  On January 30, 1913, Geyer’s Stationer announced the formation of the O.M. Weidlich Pen Company.  Neither Weidlich nor Simpson are listed among the principals, although Otto is named as “manager”:

It is unclear from this announcement whether Weidlich and Simpson had parted ways, or whether Simpson’s shenanigans forced them to set up a lifeboat company with no apparent connection in order to continue to do business.  Both companies were operating in 1913; Weidlich and Simpson advertised in October at the 5th and Sycamore location.

Weidlich’s personal life was also in turmoil during 1913, when his wife, Marla, was caught sending a series of steamy love letters to Theodore Marienthal.  She claimed it was just a joke, and Otto stood by his woman and said he believed her.  The letters, however, were made public in their entirety after Freda Marienthal sued Mrs. Weidlich for $25,000.00 for “alienation of affection” - that’s legalese for trying to steal her husband.

The salacious details made national news, and if these letters truly were a joke, it was one of the most elaborate jokes of all time.  Half a dozen of the “large batch” of letters she discovered, “containing thousands of words,” were offered in evidence, including one which read, “And then you asked me to kiss you again and I kissed and kissed and kissed again, my darling.  The kisses you love so well - not the Nethersole, but the ‘Glory kiss.’” The Cincinnati Enquirer published pictures of the two women - Mrs. Weidlich and the cuckolded wife – on April 30, 1913, along with additional lurid details: 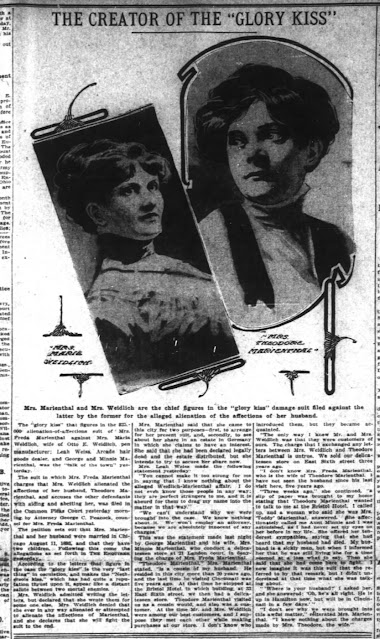 The “Glory Kiss” case, as it became known, took unexpected turns through 1913.  Mrs. Weidlich and “Teddy” later admitted to having feelings for each other, but when Mr. Marienthal’s deposition was taken in New York, he denied that he was ever married to Freda Marienthal.  Freda’s attorney, George C. Peacock, went back to his client to demand proof that she had married him, and his client disappeared.  After Peacock’s efforts to find his client failed, he withdrew from the case, as reported in the Enquirer on October 26, 1913: 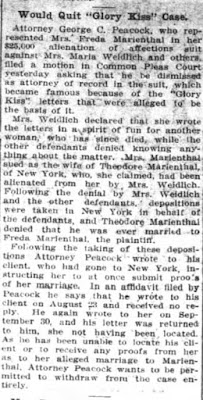 Mrs. Weidlich, her reputation in tatters, nevertheless wanted her day in court to vindicate herself.  The judge, however, had heard enough.  On November 13, 1913, the case was dismissed due to Freda Marienthal’s failure to appear and prosecute the case, the Enquirer reported on November 14.

Horrifying as the “Glory Kiss” debacle must have been for Otto Weidlich, things would get much worse for him as his pen business collapsed in spectacular fashion.  The Iron Trade Review reported on December 25, 1913 that the machinery of the O.E. Weidlich Pen Company was sold at a receiver’s sale: 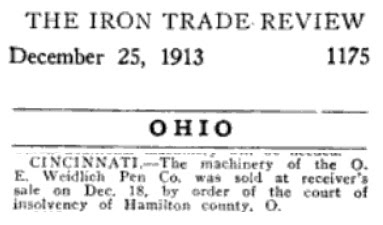 On April 1, 1914, The Bookseller, Newsdealer and Stationer reported that “the complete Fountain Pen Plant formerly operated by O.E. Weidlich” had been purchased by the Betzler and Wilson Fountain Pen Company of Akron, Ohio, which combined it with B&W’s other operations.

Although this announcement squares with collectors’ lore concerning the fate of the company, it doesn’t explain an announcement which appeared three months later, in the Cincinnati Enquirer on June 15, 1914:

It is unclear what was there to be auctioned in June, if Betzler & Wilson had already moved the company to Akron.  Perhaps the sale in April had been delayed by creditors, and Betzler & Wilson was again the successful bidder in June, 1914.

What is even more curious is that 1914 apparently wasn’t the end of the name . . . or at least, something similar to it.  A “Weidlich-Simpson Pen Co.” emerged in 1916, advertising in the October 17, 1916 edition of The Cincinnati Enquirer that it was offering “Star Self Filling Fountain Pens” and “Simplofiller” pens at a factory located at the northwest corner of Canal and Jackson Streets in Cincinnati.

The new Weidlich-Simpson Pen Company was owned by David B. Kaufmann, who identified himself as its sole proprietor when he applied to register a trademark for the “Star” name in December, 1916.  He claimed he first used the mark on October 30, 1914, right after the receiver’s auction, and the certificate is found in American Writing Instrument Trademarks 1870-1953: 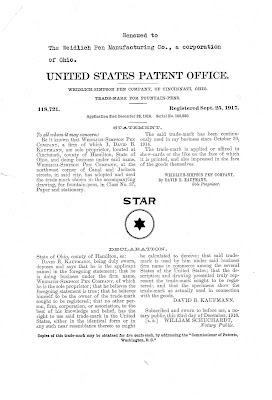 Kaufmann does not appear to have had any connection with the prior owners of the company, nor did he have any prior history of running a pen company, but he appears to have been successful at it, continuing the business for several years. 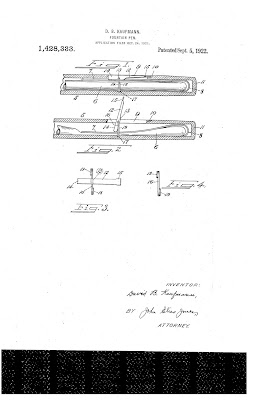 Note the ring which fits into an internal groove in the barrel to secure the lever – a development which became ubiquitous on fountain pens in the decades to come.  Kaufmann’s patent wasn’t assigned to anyone, so all we knew without the trademark registration was that he was from Cincinnati; now, we now know that innovation originated right here in Ohio, for pens Kaufmann was making under the Weidlich name.

In September, 1923, a Kentucky pharmacist advertised Weidlich-Simpson pens at half price in the September 10, 1923 Advocate-Messenger (Danville, Kentucky): 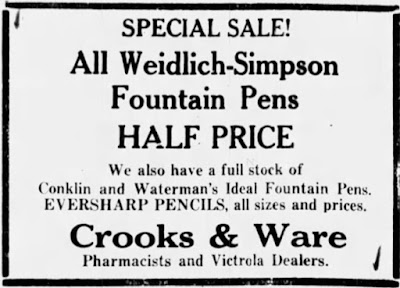 A new “Weidlich Pen Co.” advertised for traveling salesmen to the southern states on March 9, 1924 in The Enquirer:

A “Weidlich Pen Mfg. Co.” also advertised for salesmen, in the Pittsburgh Daily Post on March 29, 1925:

This last incarnation of the company survived for another thirty years.  The Cincinnati Enquirer reported that the company leased space on the third floor at 119 West Central Parkway, Cincinnati on September 15, 1935: 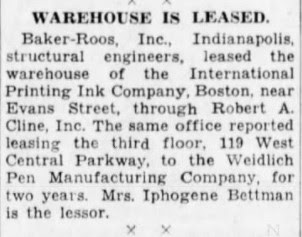 In 1943, the company was hiring for a “fountain pen assembler and rubber turner.”  I’m wondering if the company actually made pen parts, or just acquired them from jobbers and put them together:

The company renewed its lease for the space at 505 Elm Street in 1944: 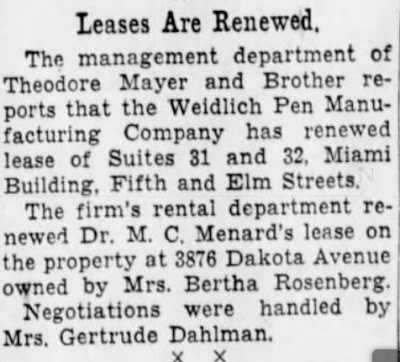 The Weidlich Pen Manufacturing Company is listed in the 1953 edition of The Directory of Ohio Manufacturers, still at 505 Elm, but the company disappears by the 1955 edition.

The pencils at the beginning of this article, as well as all the other Weidlich-marked pencils in my collection date from the last incarnation of Weidlich - the Weidlich Pen Manufacturing Company.