Yesterday’s Weidlich pencil isn’t what jostled me into exploring the entire history of the Cincinnati manufacturer - at least, not directly.  It reminded me that I’ve been meaning to try to solve a mystery that has been bugging me for more than ten years. 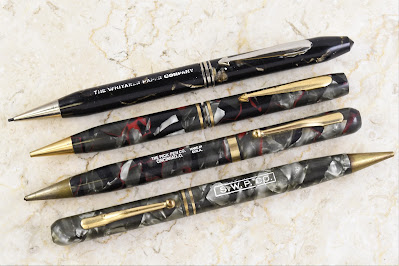 Shown here are, from top:

1. The pencil I attributed to Weidlich in yesterday’s article – probably made during the wartime years. I make this attribution based on the clip, which might have been outsourced but appears to have been produced solely for Weidlich.

2. Another pencil sporting that same clip, which appears to be earlier – this one is a rear drive, higher quality piece.

3. A pencil in that identical celluloid, imprinted “The Pick Pen Co. / Cincinnati, O.”

4. A nearly identical pencil, but marked “S.W.P. Co.”  The distinguishing feature of Pick pens and pencils was the flourish at the top end – a top which rounds to a stubby, flat cylindrical top.

In The Catalogue on page 121, I discussed these SWP pencils: “The example stamped "S.W.P. Co." has to be a Pick, as it shares the identical and unique shape,” I said.  “however, the exact meaning of the S.W.P initials is unclear. We do know that Pick was started in 1920 by a man named Arthur Schoenberger, and there is conjecture about a connection with another Cincinnati pen manufacturer, Weidlich.”

The fact that the SWP imprint is instead of – rather than in addition to – a Pick imprint suggests that this is a manufacturer’s (or producer’s) imprint; the “conjecture about a connection” that I referenced was a rumor that it stood for Simpson-Weidlich-Pick, neatly tying together the two Cincinnati pen companies.

I knew even then how thin that theory was, and after researching the Weidlich story, I think it is wrong.  None of the Weidlich enterprises went by “Simpson & Weidlich,” because Otto Weidlich’s name had top billing on every one of the companies with which he was associated – WSP would make more sense, for Weidlich-Simpson-Pick.  In addition, the Simpson name was dropped in 1924 when the Weidlich Pen Manufacturing Company was formed.  So actually, “W.P. Co.” would make the most sense, if these pencils actually represent any connection between the two.

Now that Weidlich’s history has been documented from start to finish, I researched the Pick Pen Company looking for any ties between the two companies other than their common residence in the Queen City.  I started, as I always do, by rechecking what I said in The Catalogue: that we “know” the Pick Pen Company was founded in 1920 by Arthur Schoenberger.  That was a sloppy comment on my part -- I was deferring to the late Dennis Bowden, who made that statement on the original Fountain Pen Network on July 17, 2010 and added that Schoenberger named the company after his cousin, Ed Pick.  “At least that’s the lore,” Bowden added.

I wish Bowden was still alive, so I could ask him what parts of his comment were “lore” - that Schoenberger founded the company, that he did so in 1920, that he named it after his cousin, or all of it.

Over at Badger & Blade, there is still a comment preserved by user “Nemo,” published the same week I published The Catalogue, on November 7, 2011.  Nemo adds details that give the “lore” more teeth: “Arthur Schoenberger started the Pick Pen Company in Cincinnati in 1920 at 2100 Reading Road,” he wrote.  “He knew nothing about pen making, so he hired a fellow named Weidling who had worked for the Weidlich Pen Company to set up the machinery and get the plant going, according to his son Eckbert Schoenberger. They produced pens at that location for 13 years.”

A date, an address, and a firsthand account by Schoenberger’s son – now that adds some credibility.  Hmm... “Schoenberger-Weidling-Pick”... now that might make some sense.

I’ve taken my fair share of knocks for rocking the boat of “collector’s lore,” but when as thorough a researcher as Dennis Bowden resorts to the use of the word, that’s an invitation to start from scratch. The story Dennis tells, and “Nemo” amplifies, is about half right on each of its details – and contains a blockbuster of an omission.

The Cincinnati Public Library now has a collection of city directories available online, and the detail these directories contain provides all the information necessary to clarify what really happened.  The 1919 directory has no listing for the Pick Pen Company, but it does have listings for the two names in Dennis Bowden’s account . . . sort of.

Ed G. Pick is listed with an occupation of “salesman” at 111 E. 4th Street, 9th floor.  There is no “Arthur Schoenberger” listed, and with good reason . . . our collector’s lore has garbled his last name.  Arthur W. Schoneberger was a bookkeeper by profession, at the northwest corner of Central Parkway and Jackson:

The 1920 directory adds a new business: the “Pick Manufacturing Company” is reported as a partnership of E.G. Pick and A.W. Schoneberger, at an address of 214 East 9th Street, Cincinnati . . . not at 2100 Reading Road, as lore has it (we’ll get to that in a minute):

So our collector’s lore had a little bit of basis.  A guy named Arthur W. Schoneberger (not Schoenberger) went into business with Ed Pick (not by himself) in 1920 (that part was right) as the Pick Manufacturing Company (not the Pick Pen Company) at 214 East 9th Street (not 2100 Reading Road), Cincinnati.  Of course, the directories don’t confirm Bowden’s statement that Schoneberger and Pick were cousins - that might be a nice thing to know, but it isn't really all that relevant.

I then tackled the next part of Nemo’s account: that Schoneberger (and Pick) had no idea how to set up a pen company, so they hired a guy named Weidling, formerly with Weidlich Pen, to set up the machinery and get the plant going.

The Pick Manufacturing Company did bring a Weidling on board, and yes, she (not he) was formerly associated with Weidlich-Simpson (as it was known at the time).  However, she wouldn’t have any idea how to set up the tooling and plant for a pen company either.  That isn’t a sexist statement – it is a factual one.

Although there was a W.C. Weidling Manufacturing Company was listed in city directories prior to 1920, it made baker’s equipment and other wood specialties, and there were no individuals by the name of “Weidling” listed until the 1919 directory.  In 1919, several persons suddenly appear who are listed by that surname, including W.C. Weidling himself for the first time.

Another Weidling listed in 1919 – Ruth Weidling – is described as a stenographer with a business address of the northwest corner of Central Parkway and Jackson.  That was the same address for Weidlich-Simpson at the time (and given their alphabetical proximity, conveniently found on the same page): 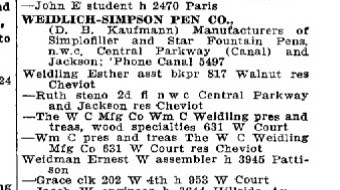 The following year, Ruth C. Weidling is identified as a bookkeeper for the Pick Manufacturing Company in 1920: 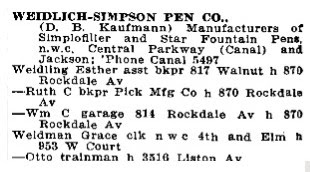 The foreman of the Pick Manufacturing Company, according to the 1920 directory, was Albert J. Aufdermarsch, a name that doesn’t square with the tale told by Schoneberger’s son to Nemo:

But wait . . . the 1920 Directory lists two foremen for the Pick Manufacturing Company.  The other one is a name well known in the pen manufacturing industry, and he would have been uniquely qualified to help start up a new pen manufacturing company.  However, he didn’t come by way of Weidlich . . . he was an independent penmaker who appears in Cincinnati directories for the first time in 1917: Charles R. Brandt. 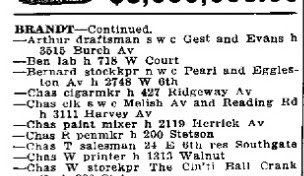 Charles Brandt is well-known by pen historians as the owner of the Boston Fountain Pen Company since 1904, and he had contracted to sell his company to the Wahl Adding Machine Company in 1916 amidst the hurricane of a chess game between Walter Sheaffer, Wahl, and Col. William B. Smith (see “Wahl, Sheaffer and the Race for Boston,” starting in Volume 4, page 300).

Brandt is listed in the 1917 Cincinnati directory simply as “penmaker” with no business address, which is unusual, since even stenographers like Ruth Weidling had a business address . . . so he can’t be associated with any of the Cincinnati manufacturing firms.  In the 1920 directory, however, Brandt is identified as a second foreman for the Pick Manufacturing Company: 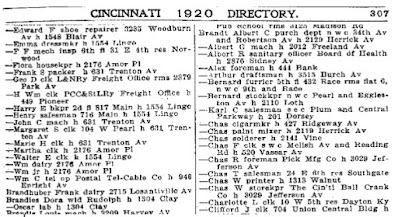 In the 1921 directory, Brandt is still listed as “foreman.” His affiliation with the Pick Manufacturing Company is dropped, but his address is still listed at Pick’s factory at 214 E. 9th.  This appears to confirm part of Nemo’s account, that an expert was brought in, just to get things started up for the new company: 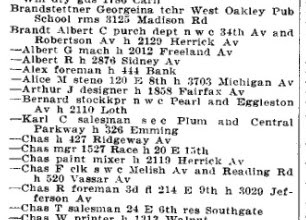 The same listing was published in 1922.  For 1923, Brandt is still listed as a foreman, but only his home address is listed, and that listing remains unchanged until the 1930-1931 directory, which lists a Charles R. Brandt as a “salesman” with a different home address, at 4121 Runnymede Avenue.  His business address in 1930 was occupied at the time by the John C. Mandery & Son Company, a local milk dealer, and in later years Brandt was listed as an advertiser for the company and last, as a driver for it in the 1949 directory.

That would be a blockbuster . . . if it were true.  There’s a problem.

As I searched forward looking for Brandt’s obituary, I found a piece in The Cincinnati Enquirer on August 22, 1943.  The story includes a photograph of four generations of Brandts:  Charles Barry Brandt, his father Calvin W. Brandt, his grandfather Charles R. Brandt and his great-grandfather, Charles W. Brandt:

The Charles Brandt who owned the Boston Fountain Pen Company would have to have been old enough to have purchased the company in 1904; even if he was a precocious businessman, he wouldn’t have been of legal age to buy anything unless he had been born in 1886 or earlier.  Charles R. Brandt should have be Charles Barry Brandt’s great-grandfather, if he was the same person I thought and hoped it was.

Perhaps the 1943 news article had confused Charles R. with Charles W., I thought, and Charles R. was the great-grandfather in the 1943 story.  Both were identified in the piece as residing at 4121 Runnymede, so I looked them up in the 1940 Census.

Nope.  The news story was right.  Charles R. Brandt was 48 years old in 1940, meaning that he was born in 1891 or 1892 and he was only 12 or 13 years old when the Charles Brandt I was thinking of acquired the Boston Fountain Pen Company.  The Charles R. Brandt who initially helped the Pick Manufacturing Company set up shop is not be the same man as the Charles Brandt who owned the Boston Fountain Pen Company.

I still don’t believe this is simply an extraordinary coincidence.  Three out of the four Brandts in that family photo were named Charles . . . it was a proud German tradition to give male decendants the same names as other family members – remember how many people were named Lothar Faber or Eberhard Faber in the Faber story?

It is simply too perfect that a Charles Brandt signs a contract to sell Boston Pen in 1916 (most assuredly containing a noncompete clause), and then another Charles Brandt just happens to show up as a penmaker in Cincinnati the following year, unaffiliated with any of the local manufacturers, quietly making pens until 1920 when he serves as the first foreman for the Pick Manufacturing Company.  If I had to guess, the Boston Uncle quietly trained his Cincinnati Nephew in the business.

We’ll call that the new lore for now.