One of my blog readers in the peanut gallery pointed this out to me in an online auction: 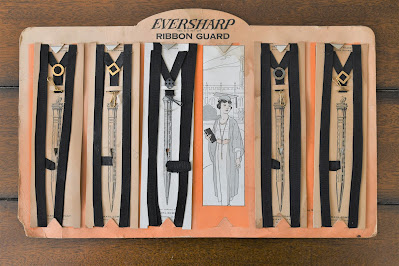 This store display card of Eversharp “ribbon guards,” missing only one, is exactly a century old now as the copyright date in the lower right hand corner indicates: 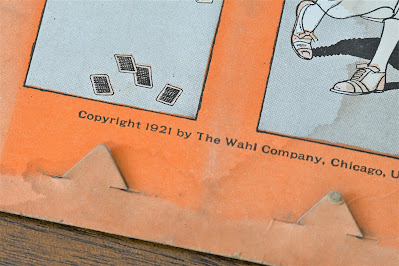 Since the empty slot revealed an attractive portrait of a young graduate, I had to see what was behind all of the other ones.  Removing them was a challenge, since the tabs that hold them in place weren’t designed to withstand restocking – it was designed to be thrown away, but to look attractive enough until the last one was sold.  There are three variations: a silver-colored model with a flower (or maybe a Gaelic sort of emblem) and two gold filled models, a round one with sheaves of wheat encircling it and a square one with a flowers and leaves pattern: 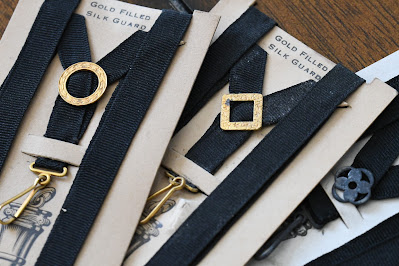 The silver plated example has “Patent Applied For” on the card; it wouldn’t be in American Writing Instrument Patents Vol. 2: 1911-1945, since it wouldn’t be in category 401 – and since it could hang nearly anything, combing through every category looking for something like this is a fool’s errand. 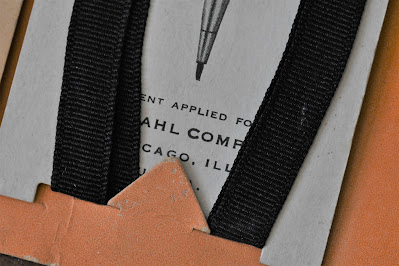 I did browse Google Patents looking for non-pen and non-pencil patents issued and assigned to Wahl, to no avail.  One patent Wahl received was for a process of tin plating, which looked promising . . . however, the process was specifically for “cylindrical objects” such as pen barrels.  If a patent was assigned, maybe it wasn't assigned to Wahl and probably it was tucked away in some obscure design patent category.  Without a patent number or date, it will be next to impossible to find.  Hope springs eternal, though, that an example on its card and bearing a patent number will surface in the future (repeat after me . . . “challenge . . . accepted”).

Behind each of these lanyards is a different drawing of women in various industrious action poses: 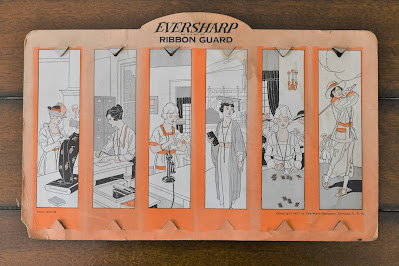 Had I posted this article even two years ago, it would end right here.  Unfortunately, that isn’t possible in today’s “woke” society – even here at my sleepy little pencil blog, I’m mindful that lurking all around me are people who are actively trying to be offended by everything.
After one vociferous reader was triggered by my use of  the phrase “take the red pill” in that recent Parker article – he believed the phrase is associated with misogyny – I’m aware there are people on the fringes of society who might read this and believe that by posting pictures of this century-old artifact, I’m promoting sexism, racism or any number of other “isms,” some of which may be dreamed up long after I’m gone.
I’ll start with the obvious: Wahl called ringtop pens and pencils “ladies” models, and not one of these drawings illustrates a man going about his day sporting one of these snazzy ribbon guards.  In 1921, if a man were walking around wearing one of these things, it would raise an eyebrow or two – in general, people might wonder why a man would wear a woman’s pencil around his neck, as if it were some mild form of crossdressing.  In those days, it was simply an issue of acceptable fashion; through today’s lens, Wahl might be accused of gender identity discrimination.
Wahl should be given credit for at least some progressive thinking at the time this card was printed.  The 19th Amendment giving women the right to vote was ratified in 1920, and this card printed just a year later shows women in non-traditional, non-gender specific roles: working, receiving an advanced degree, and playing golf.  The most “domestic” image is that of a woman shopping for fabric, but note that the subservient salesperson in the background is male.
Men could be substituted into any of these drawings, and the piece as a whole would make just as much sense . . . aside from the men-don’t-wear-ladies’-pencils thing.
The bigger elephant in the room is the lack of “diversity” represented – unless you count alternating images of blonde and brunette white women.  Does that make this piece “racist?”  Some voices lately have been saying yes, arguing that it perpetuates the notion that only white people engaged in such productive activities, or that those who are not white are less capable of doing so.
Some would go even further, claiming that I am just as guilty of racism for portraying this 100-year-old artifact in a favorable light – or at least, without a scripted condemnation of whatever negative stereotype the woke crowd might glean from it.  From that perspective, if I don’t see something wrong with this picture, there must be something wrong with me.
I’m being told over and over again these days that I need to “acknowledge my whiteness,” and every time I hear it, I know it isn’t meant as a compliment.  Where does it end?  Do I need to burn this insensitive piece of advertising, in solidarity with new woke ideals?  Should I melt down every “ladies’” model I own, to promote gender equality, peace, and understanding?
Should I destroy every Scripto in my collection, since the Atlanta company’s business model was to hire African American women – not because they were progressive, but because they were cheaper to employ?
Taken to the extreme, my entire collection – in fact, every pre-Civil Rights Movement artifact – is the product of an American economy dominated by white males.  To be fully woke, I suppose I should have my entire collection recycled, erasing what extremists might suggest is nothing but a monument to oppression.
I’m not going to do that.  Dialogue aimed at destruction rather than construction is harmful, and if we lose the ability to allow others to “go forth and sin no more,” to borrow a quote from a very good man, there will never be progress - only punishment and retribution.  People generally try to do what they think is best in their place and in their time, and it is unfair to judge anyone by whatever our current notions of right and wrong are today.  I like a line from the memorial services for departed members at my Elks lodge: “Let his faults be written in the sand, and his virtues carved on the tablets of love and memory.”
Swinging pendulums inevitably reach an apex.  These days, it’s rare to see a white male in a television commercial, unless he is a buffoon or part of a mixed-race couple.  A cynic might think corporate America is just trying to keep rioting mobs from destroying their shiny buildings in the name of racial justice.
A pragmatist knows that corporate America has simply shifted its advertising to appeal to the maximum number of potential customers and offend as few as possible.  Numbers have been crunched in boardrooms across the country, and the collective decision has been that looking racially sensitive is fashionable – after all, they figure, it’s not like white males won’t patronize a bank or buy a burger from a company just because there are hardly any white males in their advertising campaigns.
The only comfort that I get from this is how little has changed.  That’s exactly the same cost-benefit analysis Wahl’s advertising department performed 100 years ago.
What I present today is a very rare and beautifully illustrated piece of Wahl ephemera, and nothing more.  I know that it portrays only white women, but it shows how the passage of the 19th Amendment likely influenced Wahl to show women in less gender-specific roles.  Wahl marketed products in response to changing tastes at the time, and I don’t think doing so was any more wrong or right then than what advertisers are doing today.
I think that’s woke enough.
Posted by Jon Veley at 3:45 AM

Email ThisBlogThis!Share to TwitterShare to FacebookShare to Pinterest
Labels: Eversharp