A Milepost at Two Important Crossroads

When Janet got the order to work from home for the foreseeable future, we scrambled to set up all her equipment in our home office – a room which, for the last ten years, has been where my online purchases have been opened, sort of a pencil halfway house for new arrivals that haven’t made it down to the museum just yet: 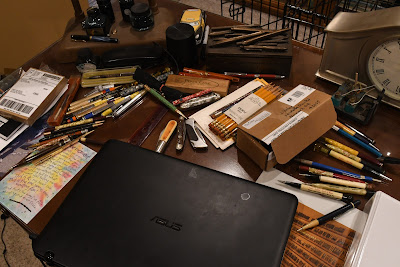 Distractions such as these were not conducive to working from home, so it was time this weekend to put these things away.  But as I started doing so, it occurred to me . . . we’ve all been through a lot these last two weeks, and maybe I can do something to give you a taste of normal.  Something you can read that isn’t about some stupid virus or some stupid politician talking about some stupid virus.  I always knew something extraordinary would probably lure me back into writing here, but I thought it would be an extraordinary find – not an extraordinary time.

So relax, take a deep breath, and forget about all that for a while.  I’ll share some of the neat stuff I’ve been finding to give you something positive things to read.  I’ll start with this one: 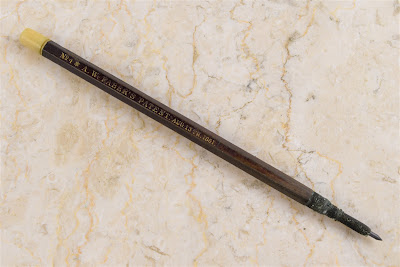 When this one popped up, I wasn’t too excited at first.  I still try to limit myself to American pencils, and I always fear once I start branching out into foreign products, such as those from the German house of A.W. Faber, I fear having too many open cans of worms.  This worm, however, proved too enticing to resist, because it has something distinctly American about it: 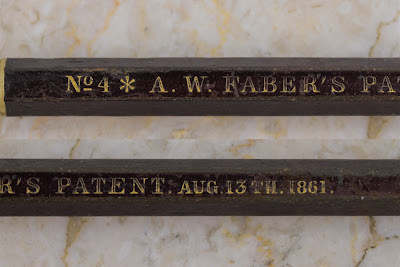 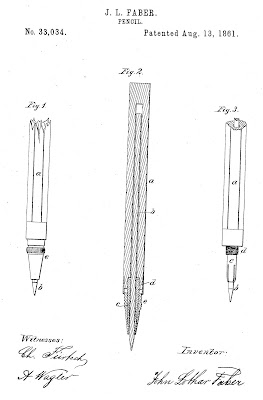 This is a really interesting time in Faber’s history.  In 1849, Lothar Faber and his brother Johann Faber dispatched their brother, Eberhard Faber, as their emissary to establish operations in America.  Eberhard set up shop in New York selling a variety of “fancy goods,” but he does not appear in directories as “sole agent” in America for A.W. Faber until 1854.

(Note: I’ve posted a more detailed history concerning the relationship between A.W. Faber and Eberhard Faber here, starting with “So Many Fabers” at https://leadheadpencils.blogspot.com/2016/01/so-many-fabers.html).

Young Eberhard soon began to establish himself as a successful American manufacturer in his own right, a reputation which was enhanced after April 1861, when the American Civil War made importing Faber pencils from abroad more difficult.  His offices and “manufacturer’s depot” were located at 133 William Street, but he later moved his offices to 718 Broadway in 1877.  Eberhard died in 1879.

Which brings me to another fascinating detail found on the back side of this pencil – much more faintly imprinted than the gold foil stamp on the other side: 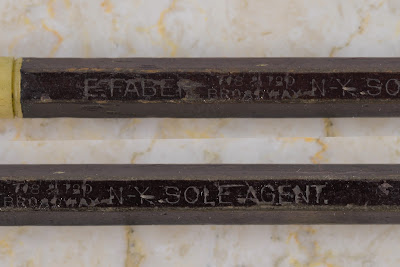 And it is that window which brings us to our second interesting crossroads, because this Faber shares some intriguing similarities with another pencil I’ve shown here before.  Note that our Faber is “left handed” – while most pencils have lettering running from the tip end towards the top, this one has lettering running the other direction (so the letters are upright when the pencil is held in your left hand).  Also note the hexagonal wood barrel and that bone finial at the top: 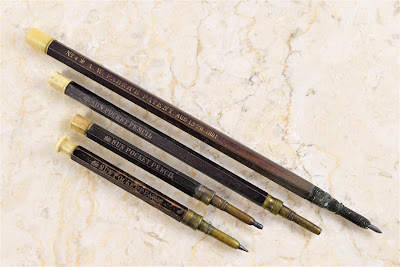 That’s our Faber alongside three examples of the “Sun Pocket Pencil,” which are also left-handed, wood hexagonal pencils with bone finials, and a nearly identical nose.  Even the lettering is identical: 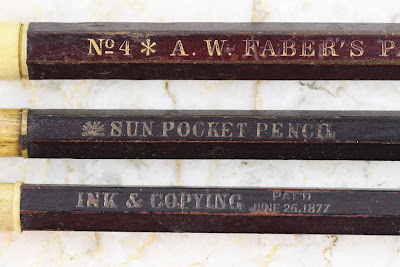 Some Sun Pocket Pencils are marked, as the bottom example in this picture, with “Ink & Copying Pat. June 26, 1877.”  That patent reference is to number 192,555 granted to Charles Walpuski and assigned to Joseph Reckendorfer – it’s for the composition of the lead, not for the pencil itself.  “Copying” or indelible lead was impregnated with ink, so that something written with it could be copied by pressing a damp piece of paper against it and then transferring the image to another piece of paper.

And who made the Sun Pocket Pencil?  Reckendorfer’s name on the assignment provides a solid clue if you are up on your pencil history, but a conclusive identification comes from a rather nice book on trademarks titled American Writing Instrument Trademarks 1870-1953: 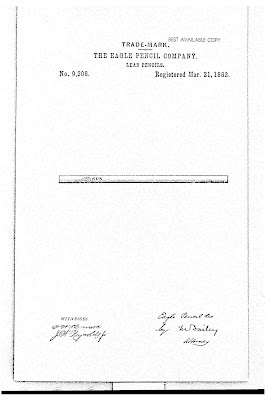 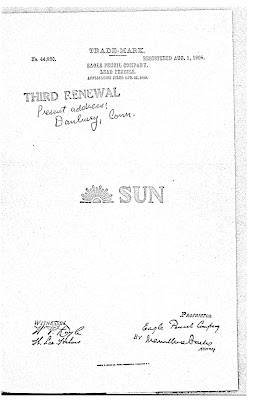 The Eagle Pencil Company registered the Sun trademark twice.  The earlier one, number 9,208, was filed on February 20, 1882 and was registered on March 21, 1882.  The second one, filed due to changes in trademark registration laws, was registered in 1905.

I’ve always had my Sun Pocket Pencils in the Eagle section at the museum, based on the Walpuski patent date for the lead and the trademarks that were assigned to Eagle.  Conclusive, right?

The pencils share a mechanism patented by Johann Faber.  Yes, some Sun Pocket Pencils have the Walpuski patent date, but that’s just for the lead inside.  As for those convincing trademarks registered by Eagle, the earliest was filed in 1882 . . . five years after the Walpuski patent was issued and long after the 1861 patent on my Faber pencil had expired.

The timing doesn’t make sense: Eagle was extremely aggressive in protecting its intellectual property, filing dozens of patents and trademarks over the years.  If Eagle was marketing a Sun Pocket Pencil in 1877, I’m confident Eagle would not have delayed five years to protect the name.   But if Eagle later purchased the rights to use the name, say in around 1882 . . .

I used to know exactly who made the Sun Pocket Pencil.  I’m still kind of sure, but the only thing I am 100% confident in saying is that whoever made the Sun also made this A.W. Faber pencil during the last two years of Eberhard Faber’s life.
Posted by Jon Veley at 5:01 PM

Thanks! You and Janet stay safe!

Thank you for writing again.

Thanks for posting entertaining new blog entries. Hoorah, new Veley writings! Just what we all need right now, as we battle the unseen enemy.
Take care

Glad to read this thank you. Please give advice for starting pencil collection mainly interested in silver��