You’ll find it funny, coming from a guy who’s a bit of a stickler for provenance, that I can’t remember precisely where today’s pencil came from.   From what I recall, it was the product of what I call “junk box provenance,” found in a lot of inconsequential things that strongly suggest no one had bothered to tamper with it for decades.  There wasn’t anything that came with it to suggest it’s special, so it's only the thing itself that speaks volumes: 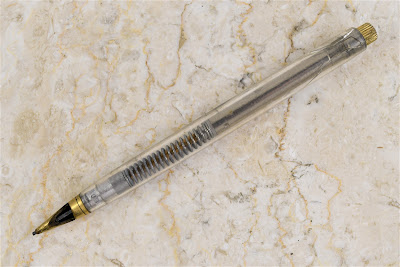 If you have X-ray vision, or if you are otherwise in the know, this is an Eversharp repeating pencil demonstrator.  Until this one came along, I would have called it a Skyline demonstrator, even though the same mechanism is found on Skylines, Fifth Avenues, and Symphonies (it was also seen on the Doric line, but I ruled that out as the barrel is round, rather than faceted).  By the time the Fifth Avenue and Symphony lines were introduced, Eversharp was fighting for its survival, not for market share, so in my mind a demonstrator was more in keeping with Eversharp’s halcyon days during the earlier Skyline era.

Until I found this one, I had only seen one other like it.  Pat Mohan sold it to me years ago: 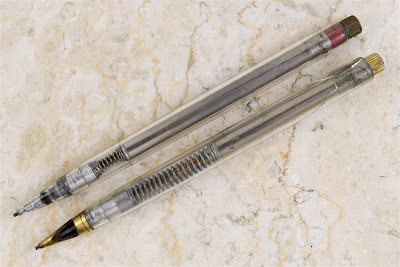 There is a difference in the mechanisms, but since the inner workings on all Eversharp models were largely interchangeable and I haven’t seen documentation concerning when different lengths of the various components were in production, all I can say is that the two are different but neither is unusual.

Note that Pat’s example was all clear, including the lucite nose cone.  This new one has a regular nose with a demonstrator window neatly cut out to expose what’s going on . . . not as cool, maybe, but too clean to have been fabricated anywhere else but at the company: 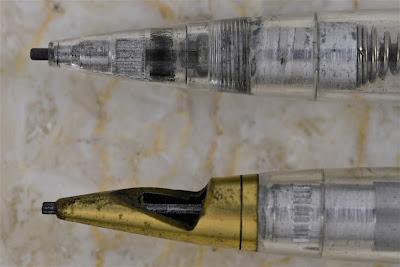 I wrote about the example Pat let me pry away from him back in 2013 (the article’s images were wiped out by the Google snafu, but for those who have The Leadhead’s Pencil Blog in print or ebook format, the article is in Volume 2, at page 8).  “Even though the barrel is completely unmarked, I’m confident it’s an Eversharp,” I wrote, “and from the shape of it I also know it’s a Skyline.”

[Editor’s note: duh, Jon.  The mechanism you can see right through the barrel is what makes it an Eversharp.  The author reserved all rights to call himself a doofus at a later time.]

But the next sentence was better: “I lump it in with the Skyline Press Clips because the press clip families had this one piece barrel.  An earlier, buttressed clip example would have a separate clip and derby assembly.”

[Editor’s note: the author further reserved the right to be heralded by himself as a genius.  Atta boy, Jon.]

Press clip era, you’ll note I said.  The example Pat passed on to me had no evidence that it ever had a clip.  This new one sure did, though.  If I had to guess, I’d say that the attempt to staple the clip in place is what caused those stress fractures.  If it had been broken out after it was inserted, you’d likely see a gaping hole, not neatly symmetrical cracks like this: 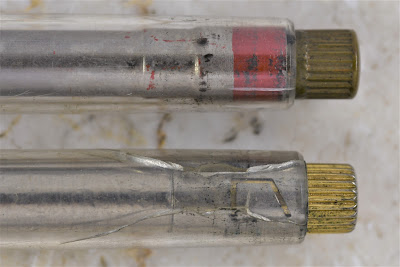 I thought, in the interests of looking a little less like damaged goods, that it might be nice to salvage a clip from a common press-clip Skyline and insert it into those staple slots . . . but there was a problem: That was no Skyline pressed clip that was fitted onto this pencil.  Those clips were a lot narrower than the slots in this barrel.

But what of the Symphony line, introduced in 1948?  Yes, most of those also had metal tops like you’d see on a Fifth Avenue, but the Symphony line also had some variations with all-plastic barrels . . . and side by side, I think that’s our likely suspect: 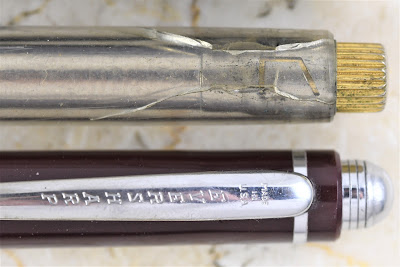 Perfectly spaced, and note that the barrel shape and location of the stapling is identical.   If this is correct, that means as Eversharp was taking its last gasps in the wake of the infamous ballpoint fiasco, the company still continued to market the novelty of its repeating pencils with demonstrators . . . even though that mechanism had been in production for more than 10 years, on three previous lines of Eversharp pencils!
Posted by Jon Veley at 3:45 AM

I find it fascinating that demonstrators were made for pencils. I guess it shows how competitive the market was.