Note:  this is the first in a series of articles documenting the history of the Eberhard Faber Pencil Co.

I’ll admit to neglecting Eberhard Faber in my collecting.  Sure, they had offices and a factory in New York, but I keep telling myself I limit my collection to American pencils . . . and after all, Faber is a German company, right?

During my research regarding the “Faber Skylines” from yesterday’s article (http://leadheadpencils.blogspot.com/2016/01/maybe-even-closer-than-we-think.html), I’ve finally figured out how Eberhard Faber, A.W. Faber and Faber-Castell are all related to each other.  The story is confused by the fact that all factions of the Faber clan were involved in the family business, all had a propensity to name their kids after themselves (at least four “Eberhards” and two “Lothar/Lothairs”), and all were at times trying to be confused with each other and trying not to be confused with each other – whenever it was convenient to do so.

According to Faber-Castell’s website, the Faber family got into the business of making pencils in 1761 when cabinetmaker Kaspar (sometimes spelled Caspar) Faber began making pencils in Stein, Germany.   Upon Kaspar’s death, his son, Anton Wilhelm Faber, took over the business, which is where the “A.W. Faber” name comes from.

Georg Leonhard Faber, Anton’s son, took over control of the company, but he continued to do business under the A.W. Faber name.  He ran the company until his death in 1839; at that time, one of his three sons, Lothar, took over the company.  A second son, Johann, worked alongside Lothar in Stein.

And then there was the youngest . . . Johann Eberhard Faber, born on December 6, 1822, who came to New York.  The official story, from the other side of the Atlantic, is that Eberhard was sent here in 1849 to set up American offices for A.W. Faber, but I doubt that official version.  If it were true, you’d expect to see trade announcements and listings in the New York directories beginning in 1849 or at least, in 1850.  There aren’t.  In fact, the first mention I can find of Eberhard in the new world is an announcement of a limited partnership he formed in 1852 with a man named John R. Boiken, for the manufacture of “Pocket-books”: 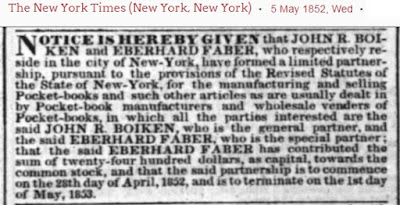 He does appear in Trow’s 1852 directory selling lead pencils at 133 William Street, but there’s no indication he’s selling on behalf of A.W.: 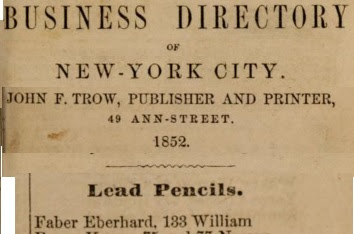 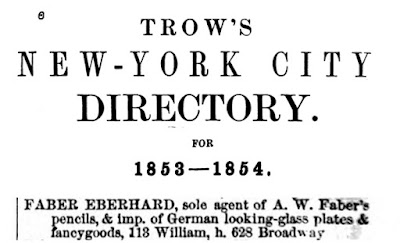 . . . as well as selling other stuff.  If Eberhard Faber was in the U.S. solely at his older brother’s beck and call to sell A.W. Faber’s pencils, it doesn’t look like Eberhard got the memo – or if he did, he was far enough away to ignore it.  In 1855, whether he was reined in by the family or otherwise, advertisements start appearing for the A.W. Faber “manufacturer’s depot” at 133 William Street:

When the American Civil War began in April, 1861, shipping from Europe became more complicated.  All the sources I read agree that in 1861, Eberhard Faber “built” a factory in the United States, on the site of what is now the United Nations; one source indicated new import tariffs might have been a contributing factor in that decision, and George Petrosky’s “The Pencil: A History of Design and Circumstance” suggests that the factory was built with the financial support of the German Fabers and manufactured only those grades of pencils which were more heavily taxed, with the more expensive grades being imported.

Although sources after the fact hailed this as the first pencil manufacturing facility in the United States, there doesn’t appear to have been much fanfare at the time about its establishment or operation.  In fact, I found nothing about Faber’s first facility until the New York Herald reported that the factory burned down on the morning of May 29, 1872: 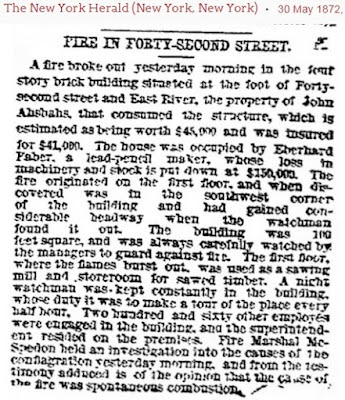 The article indicates that Faber lost $150,000.00 in equipment and stock, and that Faber had 261 employees working in the 100-foot-square, four-story building – that he was renting from a “John Ahsbahs.”

Faber, though was anything but down.  The following day, he published a notice about his future plans: 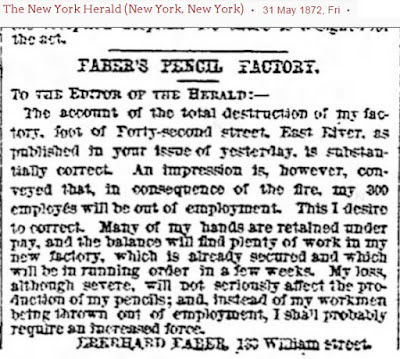 “An impression is conveyed,” Faber says, “that my 300 employees will be out employment.  This I desire to correct.”  Faber indicates – just two days after the fire – that his new factory was “already secured and which will be in running order in a few weeks.”  The man was true to his word: he acquired the building known as 100 West Street  from Francis N. Gove on June 24, 1872, according to the Eberhard Faber Pencil Company Historic District Designation Report prepared by the New York City Landmarks Preservation Commission.  By September 8, 1872, the facility appears to have been operational, and the H.H. Seavey arrived at the Port of New York from Faber’s lumber production facility in Cedar Keys, Florida, laden with cedar logs destined to become pencils: 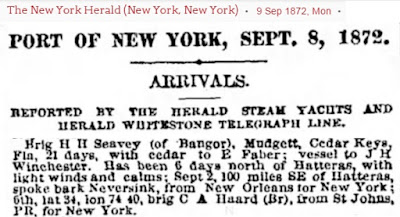 Eberhard Faber died in 1879.  His obituary was picked up in the national press – here’s a copy from the Janesville, Wisconsin Daily Gazette: 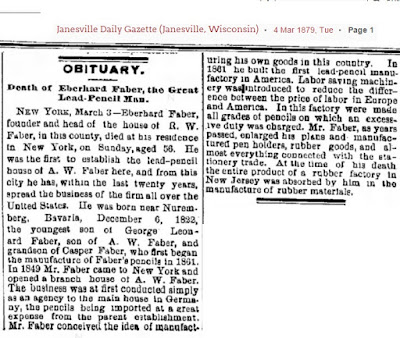 This is where Faber’s history becomes really confusing.  True to tradition, the American Faber business was handed down to Eberhard Faber’s sons.  The older, named Eberhard Faber after the head of the American Fabers, took over the sales and marketing; the younger, named Lothar Faber after his uncle, the head of the German Fabers, became president of the company, according to this biographical sketch in the 1910 Cyclopedia of American Biography: 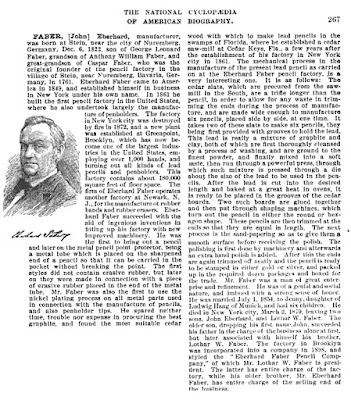 Note that while Faber’s obituary says Eberhard Faber first operated “as an agency to the main house in Germany,” the 1910 sketch says that he “established himself in business under his own name.”  I believe both are true.  However, as his children developed and grew his business in the decades to come, the distance between the two families would widen.

Part two of this series is posted at http://leadheadpencils.blogspot.com/2016/01/a-gap-wider-than-atlantic.html.
Posted by Jon Veley at 3:45 AM