I’ve always got a soft spot for a good “trick” pencil – pencils that do something more than write, and the Neldun falls into that category: 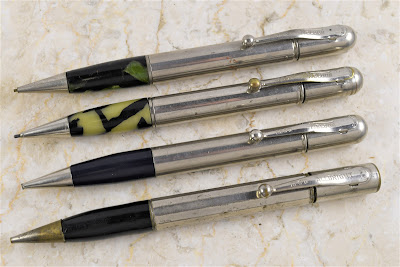 The Neldun is a lighter pencil.  It appears on page 105 of The Catalogue, although I didn’t know much of anything about it at the time: 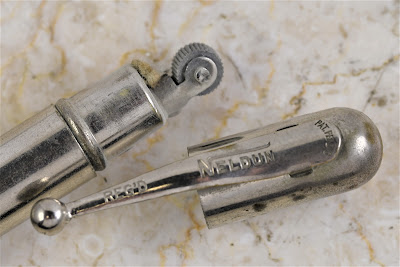 The bottom example in that first picture shows a faceted, flattop version of essentially the same pencil, marked “Allbright” instead of Neldun.  I wrote about that one back in September, 2016 (see https://leadheadpencils.blogspot.com/2016/09/subbrands-of-subbrands.html). 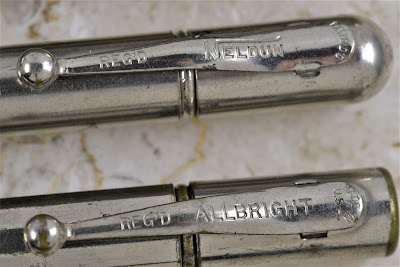 I had thought, until the Allbright turned up, that these must have been foreign made, since the “Reg’d” imprint you see on the clips suggests either English or Japanese production.  But then again, you’ll notice the Allbright distinctly says “Made in U.S.A.” instead of “Pat. Pend’g.” at the top of the clip.

The Allbright remains the only one I’ve seen, but Nelduns turn up from time to time and I’m a sucker for an example in a different color.  That’s why when this one turned up online, it wasn’t a question of whether I would buy it  -- it was how fast I could punch the buttons to make it happen: 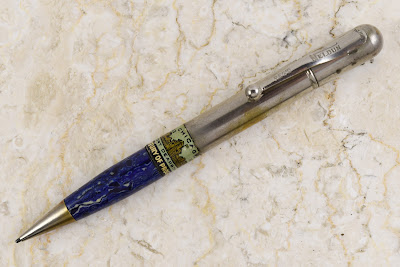 That lapis color on the lower barrel, though, was only part of what had my motor running for this one: 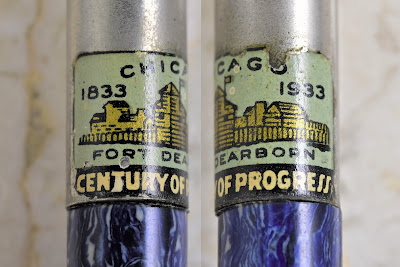 The “Century of Progress” sticker commemorates the Chicago Worlds’ Fair of 1933-1934 – another passion of mine.  Other Chicago makers, including Eversharp and Autopoint also made commemorative souvenirs for the fair.  The Eversharps you’ve seen here; as for Autopoint, I featured the one I pried away from Irvine Nichols on page 113 in A Century of Autopoint: 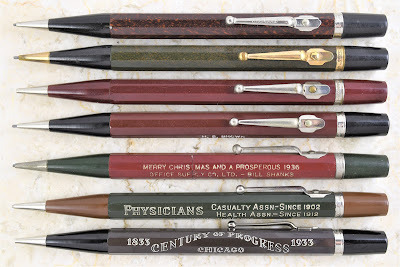 If the Allbright suggests these Nelduns were American-made, finding one produced for the Century of Progress all but screams these are homegrown – and it sharply narrowed my research focus to firms with a Chicago connection operating in the early 1930s.  I took another shot at trying to learn the source of these Allbright and Neldun pencils . . . and I think I’ve found a really good lead.  There was a company located in Chicago, founded in 1901, which manufactured machinery and equipment for the meat packing industry:

I ran across the company in several court cases, mostly involving patent disputes with other meat packing companies.  The name . . . the location . . . the manufacturing capability.  It’s like Colonel Mustard is waving around a lighter pencil in the library instead of a candlestick.  That name just can’t be a coincidence.

Is it a stretch to think that a company specializing in making meat processing equipment would, during the depths of the Depression, take a stab at entering the novelty pencil market?  I don’t think so.  Allbright-Nell published a flashy trade catalog in 1932, just one year before the Century of Progress exposition opened, and while I haven’t been able to get my hands on a copy, one online seller had an image of the introductory pages, in which I found this: 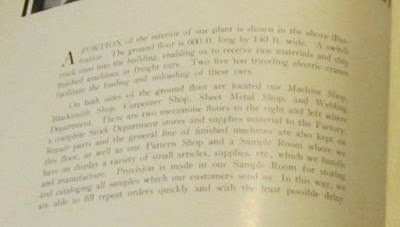 The introduction describes the company’s facilities, including “a Sample Room where we have on display a variety of small articles, supplies, etc., which we handle and manufacture.”

All my other leads have been dead ends.  Whatever patent was pending as referenced on Neldun clips, the patent didn’t surface when I wrote American Writing Instrument Patents 1911-1945 - all the patent applications pending when Nelduns were sold at the Century of Progress were issued to Aronson’s Art Metal Works for their Ronson Penciliters.  If “Reg’d.” implies a trademark filing for either the Allbright or Neldun names, it didn’t turn up while I was writing American Writing Instrument Trademarks 1870-1953.

Maybe Allbright-Nell is just a guess, but I think it’s a good one.
Posted by Jon Veley at 4:31 PM

I wonder if these pencil lighters leaked lighter fluid?