A Bird Under the Other Rock

George Kovalenko was one of my early mentors when I was developing the early version of the Online Mechanical Pencil Museum and during the time I wrote The Catalogue.  Soon after I started writing this blog, I had speculated a bit about the origins of one brand of pencil – I don’t remember which – but I didn’t have to.  The answer which had been eluding me as a pencil guy was fairly obvious to anyone into fountain pens.

I felt pretty foolish when the answer was pointed out to me, and I admitted I must have been living under a rock to hang around with all these pen guys without knowing this answer.  George came to my defense:  pen folk live under one rock and pencil people live under another one, he said . . . and sometimes we both need to get out and explore what’s under each other’s rocks.

As I was getting ready to write this article, I did my usual poking around and learned that something that is fairly common knowledge under my particular rock might not be so well known under rocks on the “other side.”   Now that I’m in a position to return the favor, I’ll lift this little rock I call home and show you around.

It started with this one: 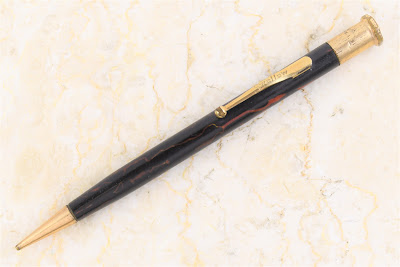 The pictures from the online auction were terrible, and about all I could tell for certain was that this one had a really nice color, with those red veins on black, and that distinctive faceted top.  I couldn’t read the clip, but that top tipped me off (“topped me off?”) that this was probably a Mabie Todd Swallow, which proved correct: 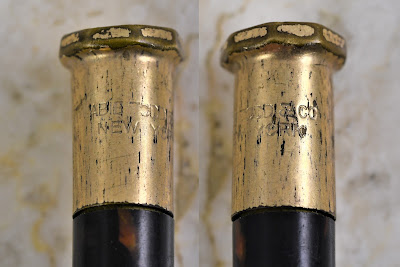 Rough, yes.  Meh - I didn’t pay much, I’ll probably find a better cap at some point and that color is just to die for.

As I put it away, it went towards the end of the Mabie Todd wing at the museum, where I keep my other example of the Swallow alongside another later Mabie Todd subbrand: the “Starling.” 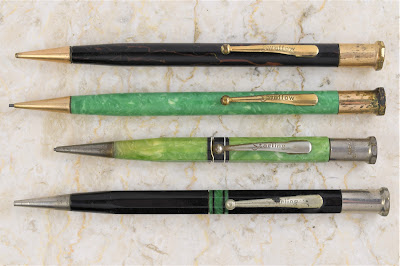 This is a pretty small straw poll here, but if these Swallows and Starlings are consistent with other examples of these Mabie Todd subbrands, I can tell you that Starlings had faceted barrels, inlaid middle sections of different colors and nickel-plated trim.  Swallows had gold filled trim and plain, although colorful, round barrels. 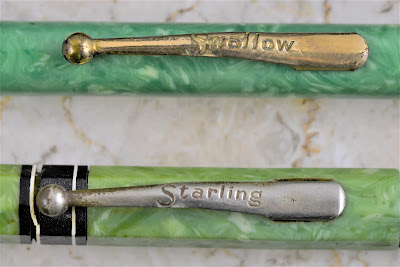 I was surprised to see some confusion on the fountain pen side of the world concerning Mabie Todd’s connection with the Starling brand.  After all, both of my Starlings have been in the Mabie Todd section of the museum for more than a decade, since the caps are clearly marked with the Mabie Todd name (note: the larger one is also so marked – the imprint is just turned away from the camera and I was too lazy to reshoot).

Starling fountain pens, apparently, are not marked with the Mabie Todd name and are more difficult to attribute.  Speculation concerning the origins of the Starling pen began on the Fountain Pen Network in 2013 (that’s the real FPN, not the hijacked Facebook version ruled by rulehappy, self-important dictators – ask me what I really think when I’ve had a few some time); a couple contributors deduced a Mabie Todd connection during that conversation, primarily because of the bird name thing, but no one was able to provide a conclusive diagnosis.

I thought maybe people generally haven’t read David Moak’s excellent book, Mabie in America, which is still the definitive word on all things Mabie Todd.  Hell, I can sympathize with someone writing a great book nobody seems to read!

I checked Mabie in America, and I’ll chalk what I know about the Starling up to good luck in finding a couple examples with clear imprints.  Moak’s index doesn’t refer to the Starling, but on page 153 he states the Starling was introduced by Mabie Todd in the 1930s, including a picture of a pencil similar to the ones I have found.  “The author has seen one other example of a Starling pencil, but no pens,” he says.  Unfortunately, the poor lighting in Moak’s photography leaves me questioning whether the example shown has gold filled or nickel plated trim; otherwise, however, what he pictures is the same as what I have observed.

So while anyone who thoroughly read Moak’s book would know Starling pens were made by Mabie Todd, under pen rocks it’s remained an obscure bit of information; less so under pencil rocks.

You’re welcome, pen guys.  Come visit under my rock any time!
Posted by Jon Veley at 3:45 AM