And Now, For Some Overdue Respect

This article has been edited and included in The Leadhead's Pencil Blog Volume 5; copies are available print on demand through Amazon here, and I offer an ebook version in pdf format at the Legendary Lead Company here.
If you don't want the book but you enjoy this article, please consider supporting the Blog project here.
I take a little flak from the peanut gallery whenever I post about pencils like these . . . 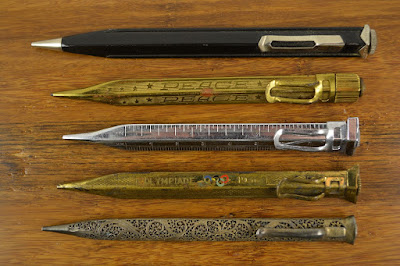 The objection, to paraphrase, is that they are beneath the dignity of this blog – as if we pencil guys have standards!  Actually I do, but mine isn’t a standard of financial value or brandname recognition.  The mighty threshhold any pencil must meet before it finds its way to this blog is this:

It has to be something I find interesting.

Fortunately, when it comes to these, I’ve found something which might raise these pencils to other, more objective standards of historical significance and desirability.

For the last few years, I’ve indexed these under the Brown and Bigelow tab, since that top example is marked with a B&B logo and I tracked down the design patent issued in the United States for these in 1937 (applied for in 1935 – see http://leadheadpencils.blogspot.com/2013/03/what-they-are-and-where-they-got-idea.html).

The others, though, are unmarked and are clearly not American – all clues concerning their origins point to either German or Japanese.  I’ve hoped for a long time to find one that had some more definitive markings to identify it, so I was pleased to find this: 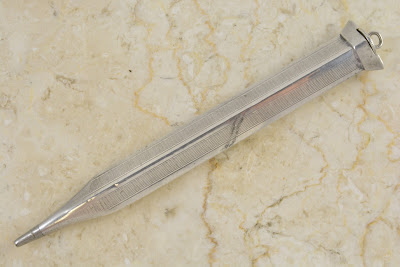 The seller already had me at “sterling” and the fact that this one’s a ringtop, which are more difficult to find.  The manufacturer’s imprint stamped on top was a bonus, and I was doubly pleased that the name would finally command some long overdue respect for these: 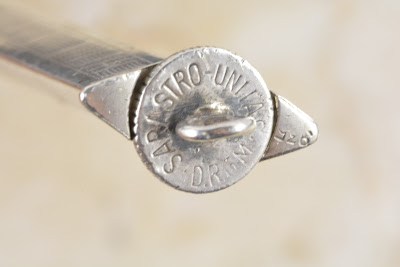 Was Sarastro responsible for all the German-made examples along these lines?  It certainly seems reasonable to attribute the 1936 Olympics example to the firm.  The “Peace” pencils?  I have found some indication that the Japanese firm Kanoe made some of them, but it would make sense for pencils marked “Peace” to be made in both Germany and Japan during both countries’ rebuilding in the wake of World War II.
Posted by Jon Veley at 3:45 AM

Email ThisBlogThis!Share to TwitterShare to FacebookShare to Pinterest
Labels: Sarastro

I love these. I only have three though. Is it correct that they are front-loading?

Well, yes, in a manner of speaking. You can load these by pushing a lead in from the front end. As easily as the works remove, though, I usually pull out the mechanism, make sure the collet is cleaned out to receive a new lead, and insert the lead while the mechanism is out. Either way works though.

Hello Sir. I have one of these. No top ring, but stamped GERMANY. It is not engraved. On the clip, it says Sarastro and Unitas, but where yours says DRGM, mine has PAT APP FOR. It's silver for sure. Just unsure if it is from the same era as yours are. Pre 1945. Thank you

I just picked one up at a flea market. My example is marked at the top, on the side with simply Japan. Now, I need to determine the lead size and how to operate it. :^)