I’ve thought for some time that Victorian pencils marked “Sterling.A” were made by Aikin, Lambert & Co., one of the New York companies that supplied nibs to the fledgling L.E. Waterman Company in the late nineteenth century and which by 1907 had become a Waterman subsidiary.

I’ve been told by the experts that’s right,

I’ve never been completely satisfied with that reassurance.

The universe of words and names that begin with “A” just seems a bit broad for that kind of conclusion, without some other supporting evidence – at least, that’s what I’ve always felt.  Maybe the experts had seen that supporting evidence and had not shared it with me, but on the other hand they could simply be confident that no contrary evidence would surface to challenge the notion.

Recently I ran across this pair of sterling silver pencils - one at the DC show, and the other in an online auction: 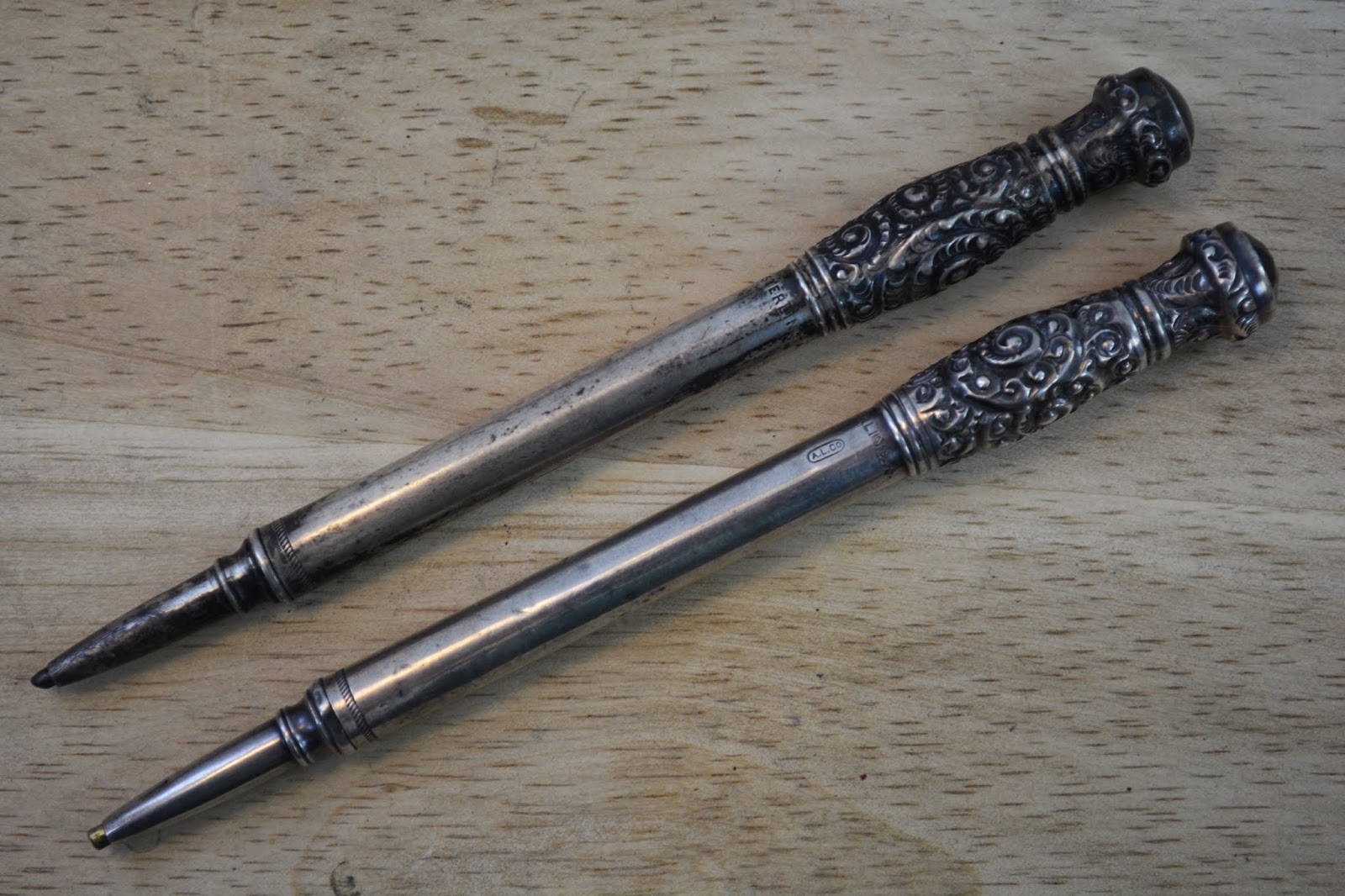 Yeah, I could shine them up . . . but I kind of like the patina.  Both the knurling at the nose and the tops on these are just too similar to write off as coincidence: 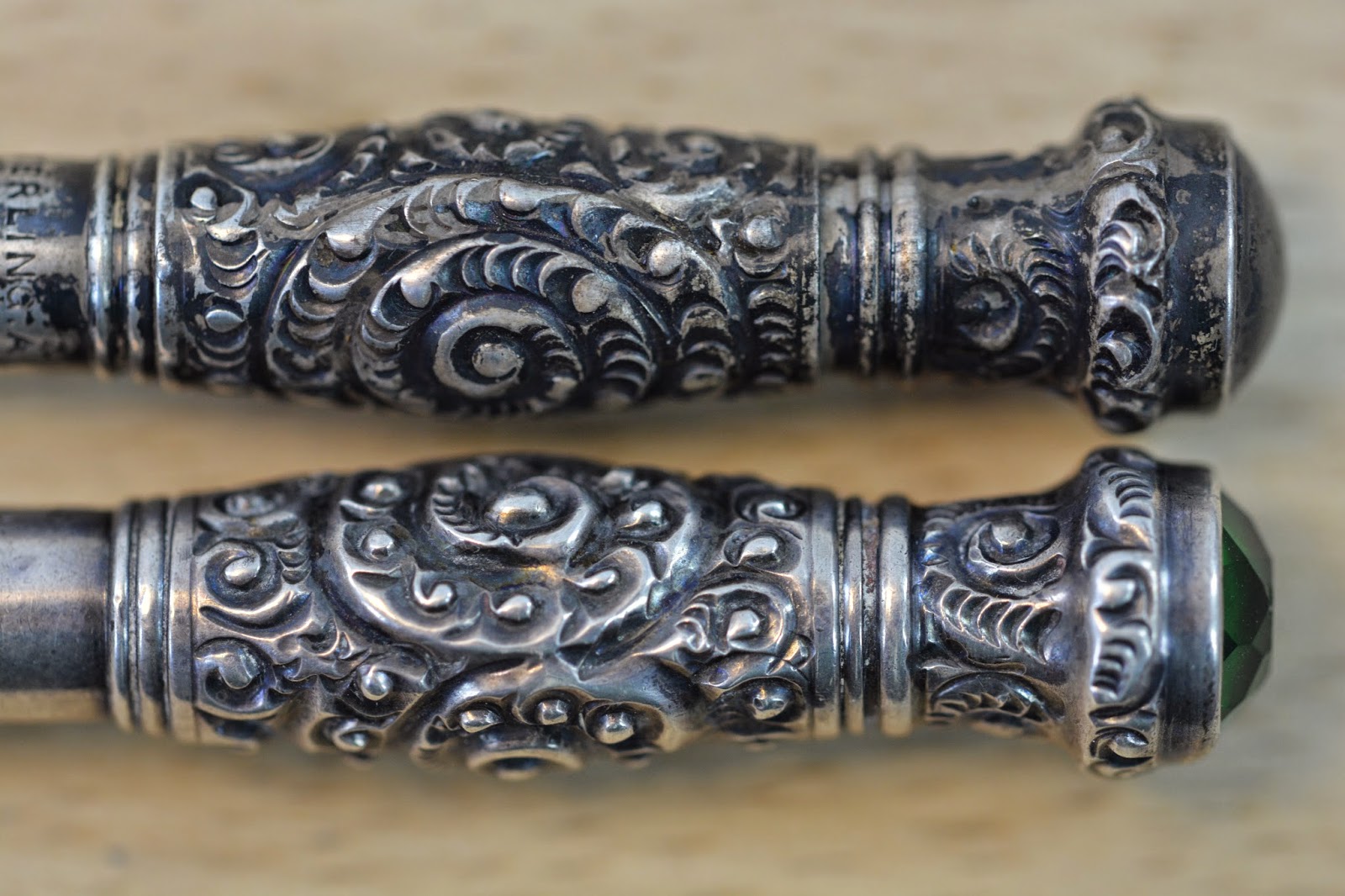 In fact, the only real difference between the two is that one example has a green glass “jewel” set in the top instead of a plain metal cap: 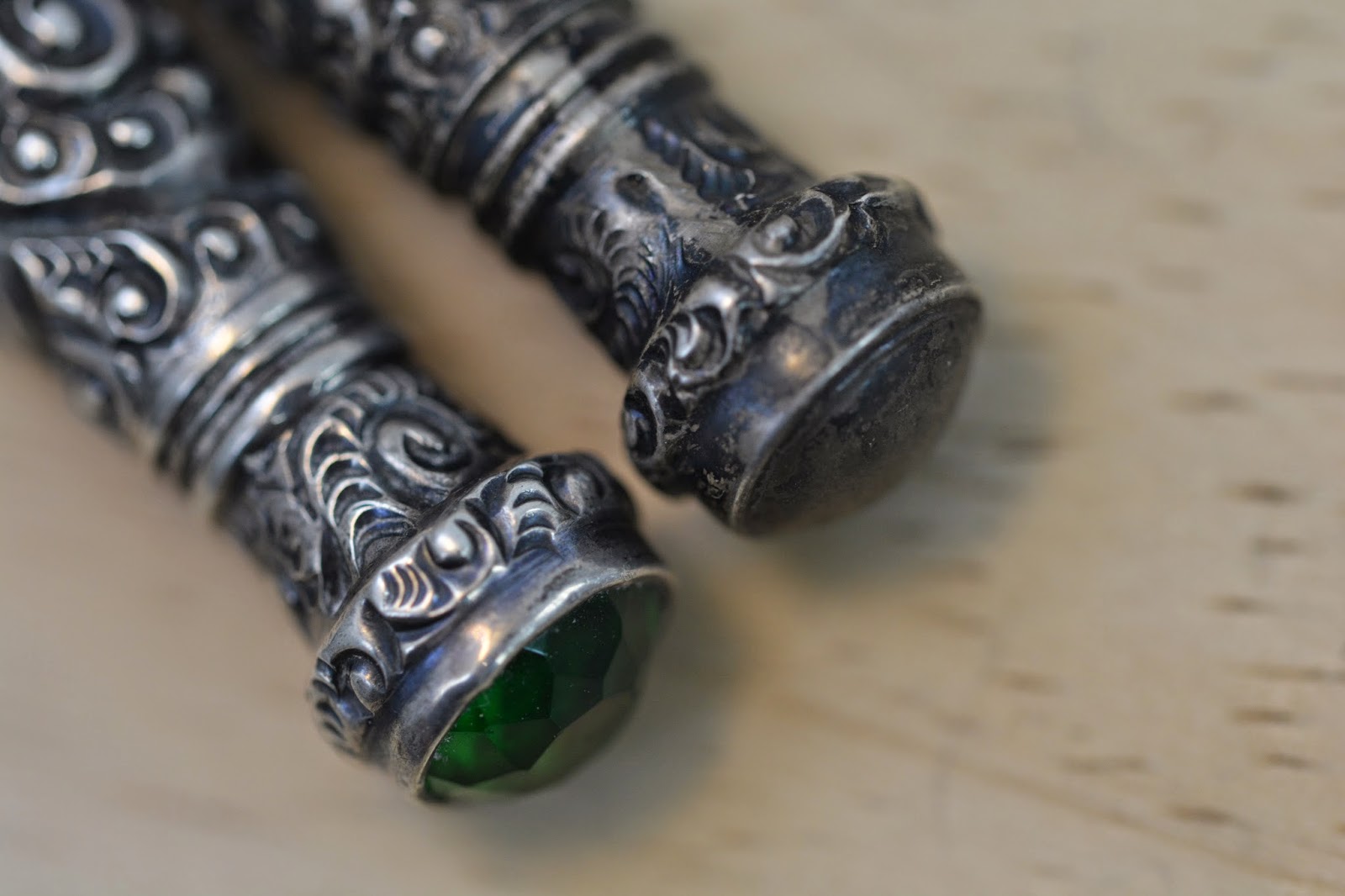 Well, that and one other detail, which is the reason I’m writing about them today: 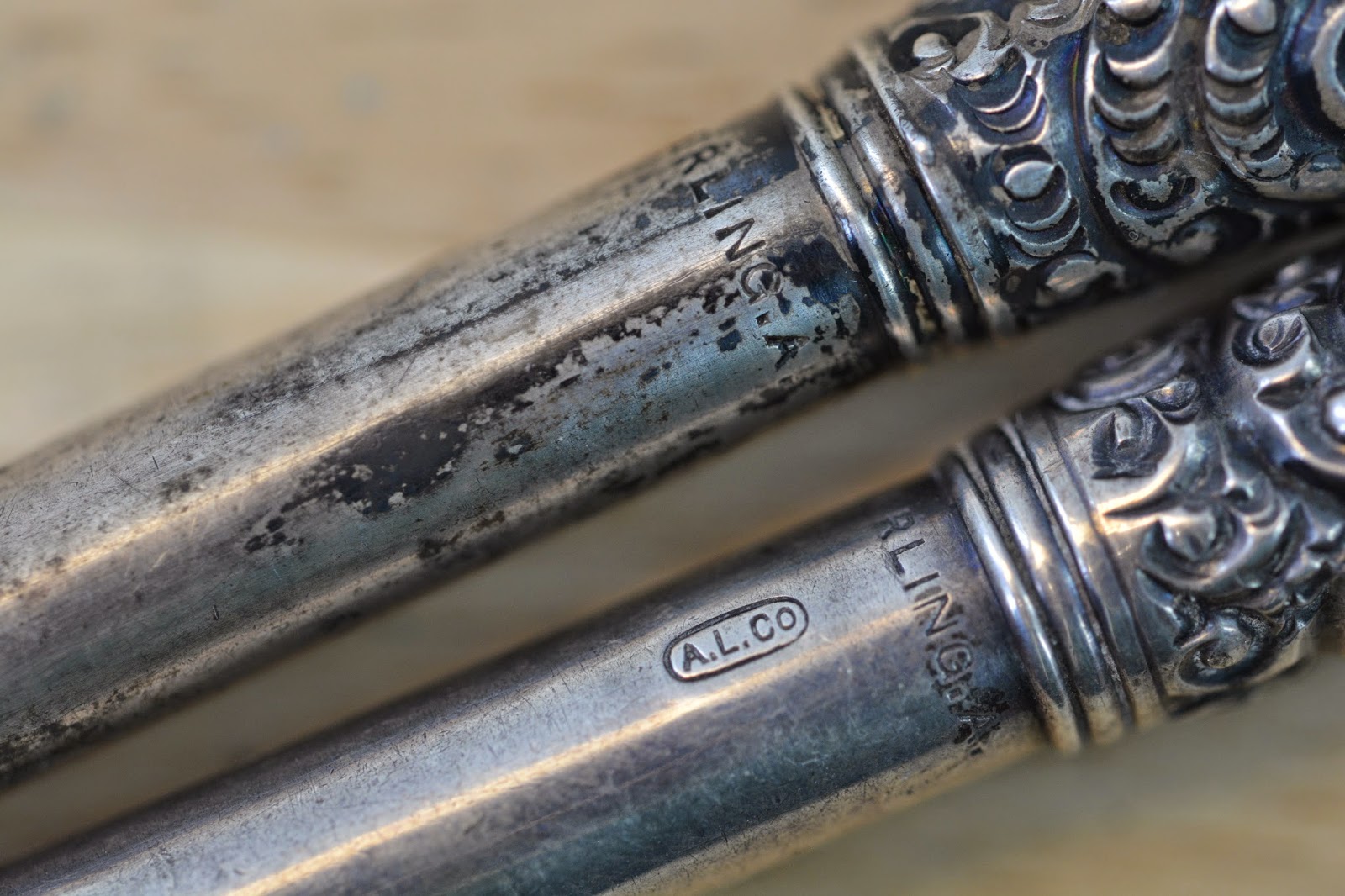 Both are marked “Sterling.A,” but the jeweled example also has Aikin Lambert’s “ALCo” hallmark.   And then, as if to add an explanation point to the end of the argument, this cedar pencil holder came my way in the “Mother Lode” hoard from Philadelphia in January: 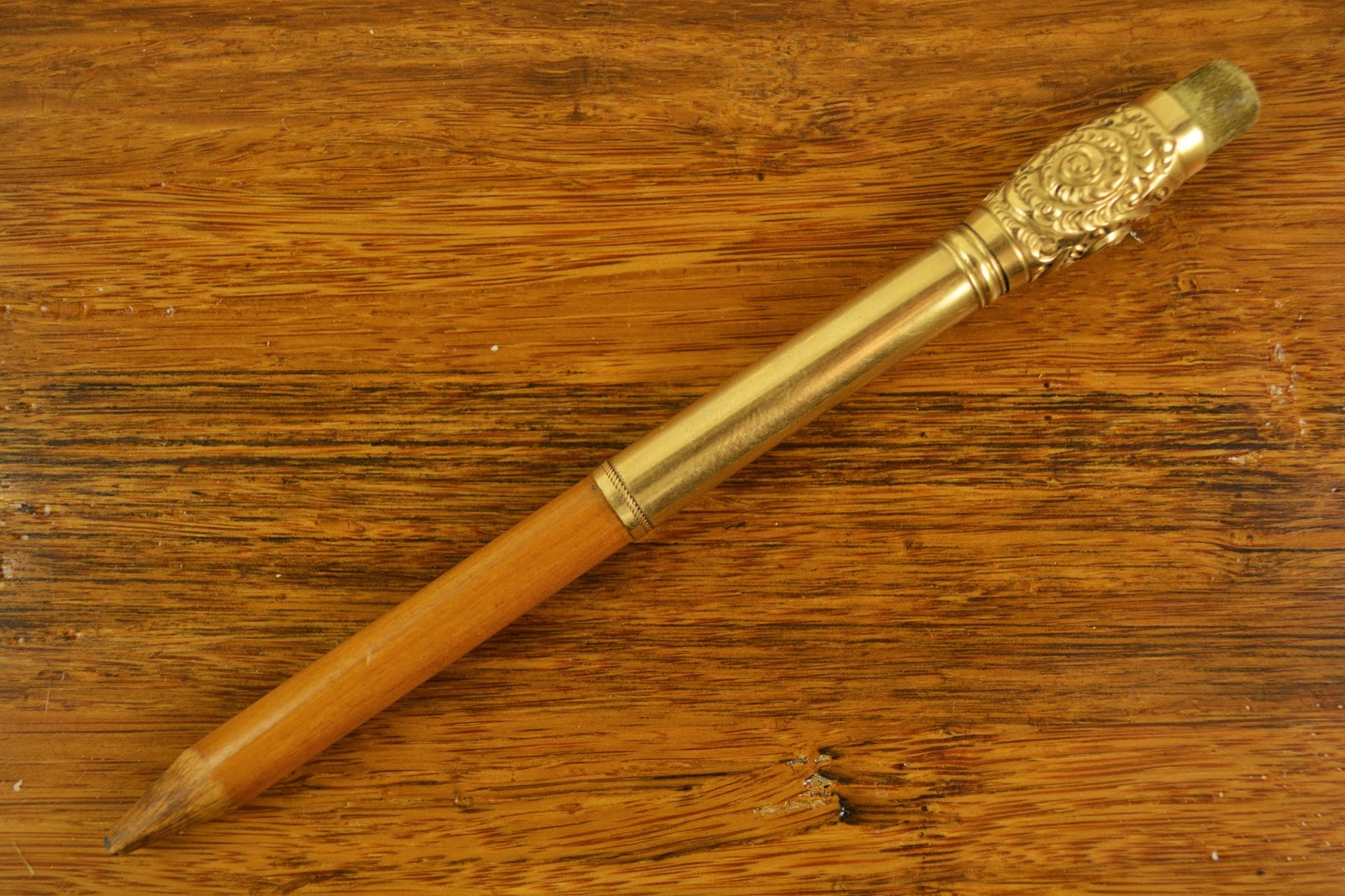 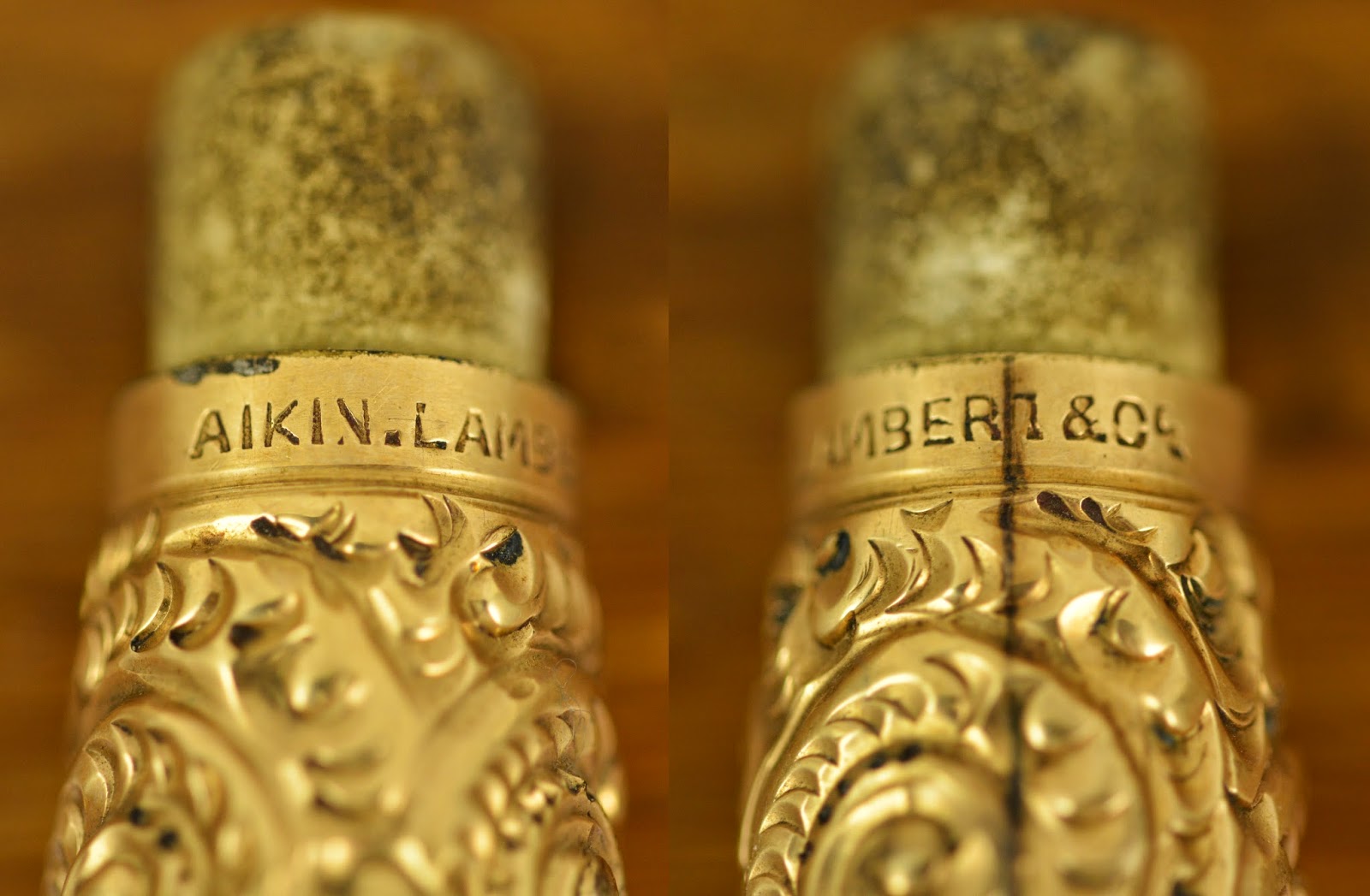 I recently found a Aikin Lambert lever fill fountain pen and in doing research I read that Aikin Lambert become part of Waterman in 1932. I think the lever filling system was introduced in 1913. So I would think the date could be later than 1913. FYI

Sort of. Aikin Lambert was completely controlled by Waterman by 1914, sharing officers and such.

David Nishimura wrote a great article on this: http://www.vintagepensblog.blogspot.com/2012/12/waterman-and-aikin-lambert.html

If you read the article all the way to the end, including the update, you'll see that complete control was secured by Waterman by around 1907, not 1914.

There is still a lot of misinformation circulating regarding pen and pencil history. Keep reading blogs such as this, and you'll be way ahead of the game!

Thanks, David - I've fixed the date!