This article has been edited and included in The Leadhead's Pencil Blog Volume 3; copies are available print on demand through Amazon here, and I offer an ebook version in pdf format at the Legendary Lead Company here.
If you don't want the book but you enjoy this article, please consider supporting the Blog project here.
The earliest design for a mechanical pencil was patented in England in 1822 by Sampson Mordan and John Isaac Hawkins: 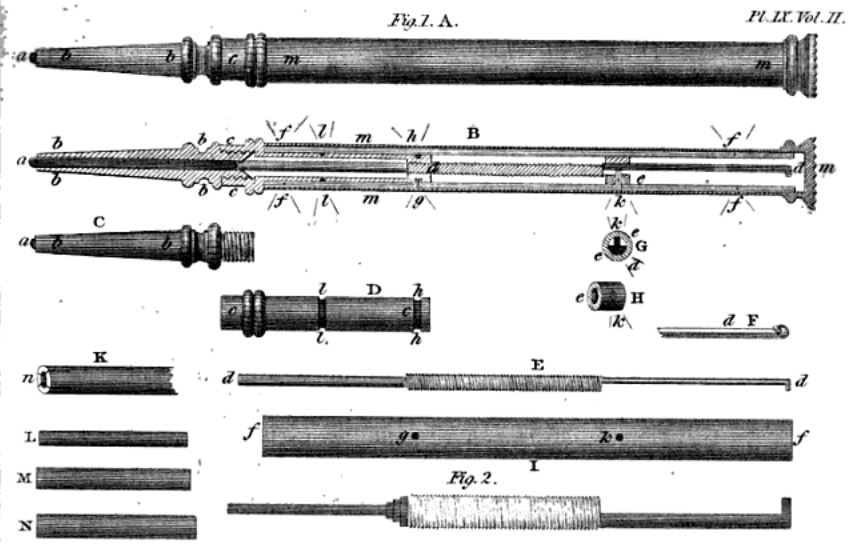 In the United States, the first patents for mechanical pencils were issued in 1829 - one in April to Joseph Saxton of Philadelphia, and another in July to William Jackson, also from Philly. Unfortunately, the 1836 patent office fire destroyed these documents, so all we know about these today comes from an index compiled from the charred remains of the office. Also destroyed was John Hague’s 1833 patent, Henry Withers’ 1834 patent for a pen/pencil combo, and Elwood Meeds’ 1835 patent.

Miraculously, John Bogardus’ 1833 patent was one of the few which survived the fire; in fact, it’s the earliest American patent for any writing instrument to have survived: 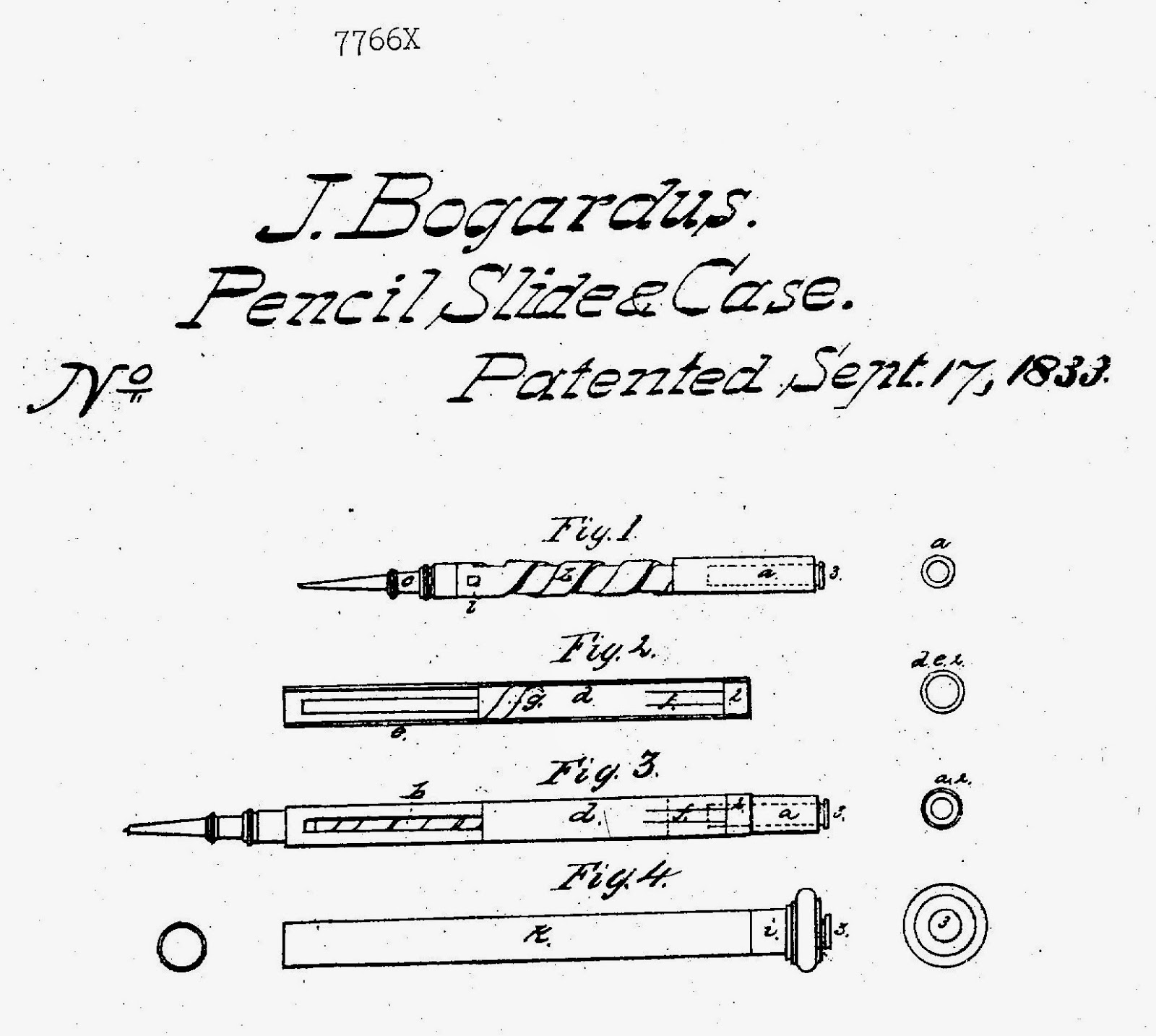 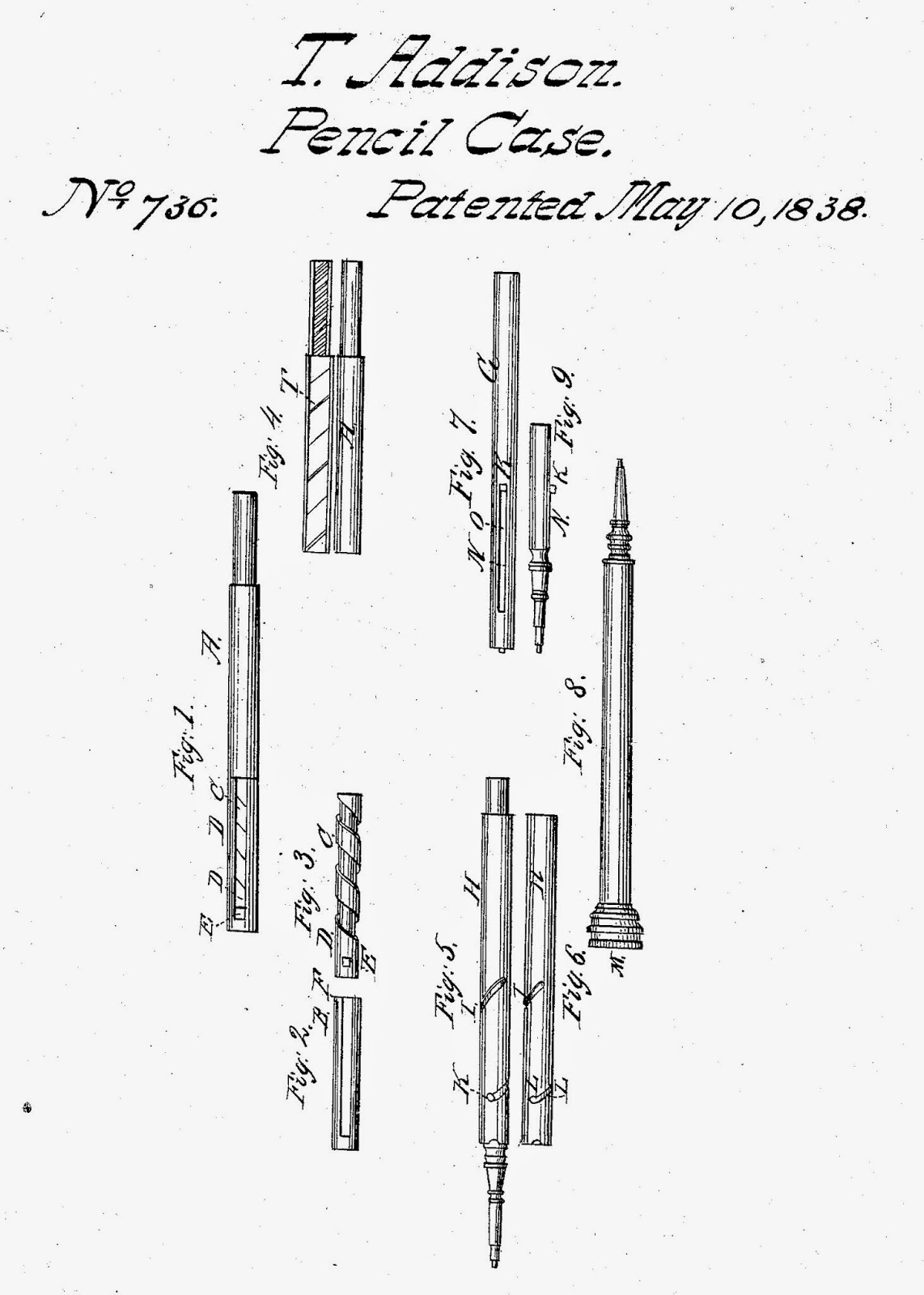 That eighth guy is as far back as I’ve been able to reach: 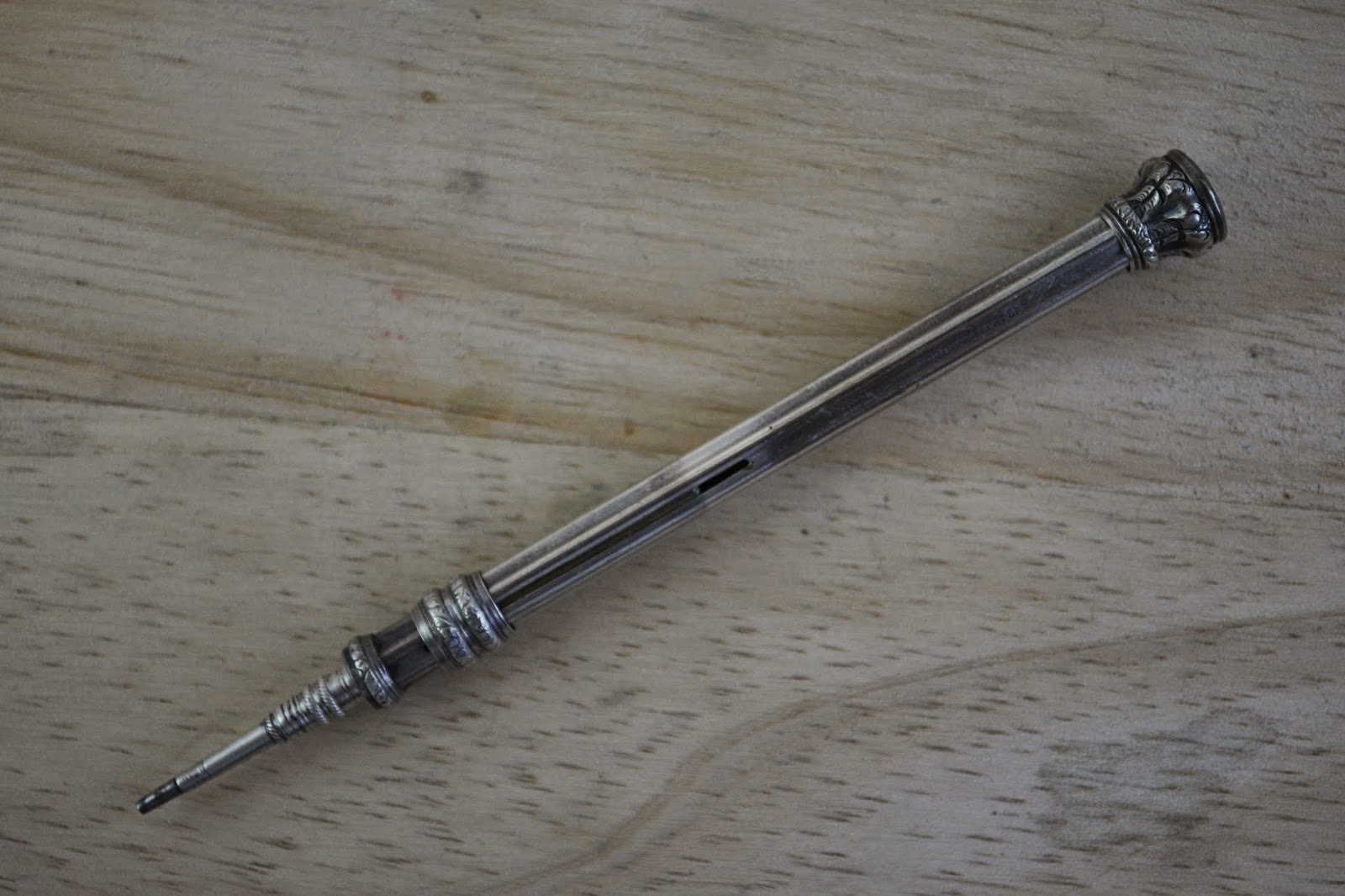 It practically takes a microscope to find the imprints on diminutive Victorian pencils like these: 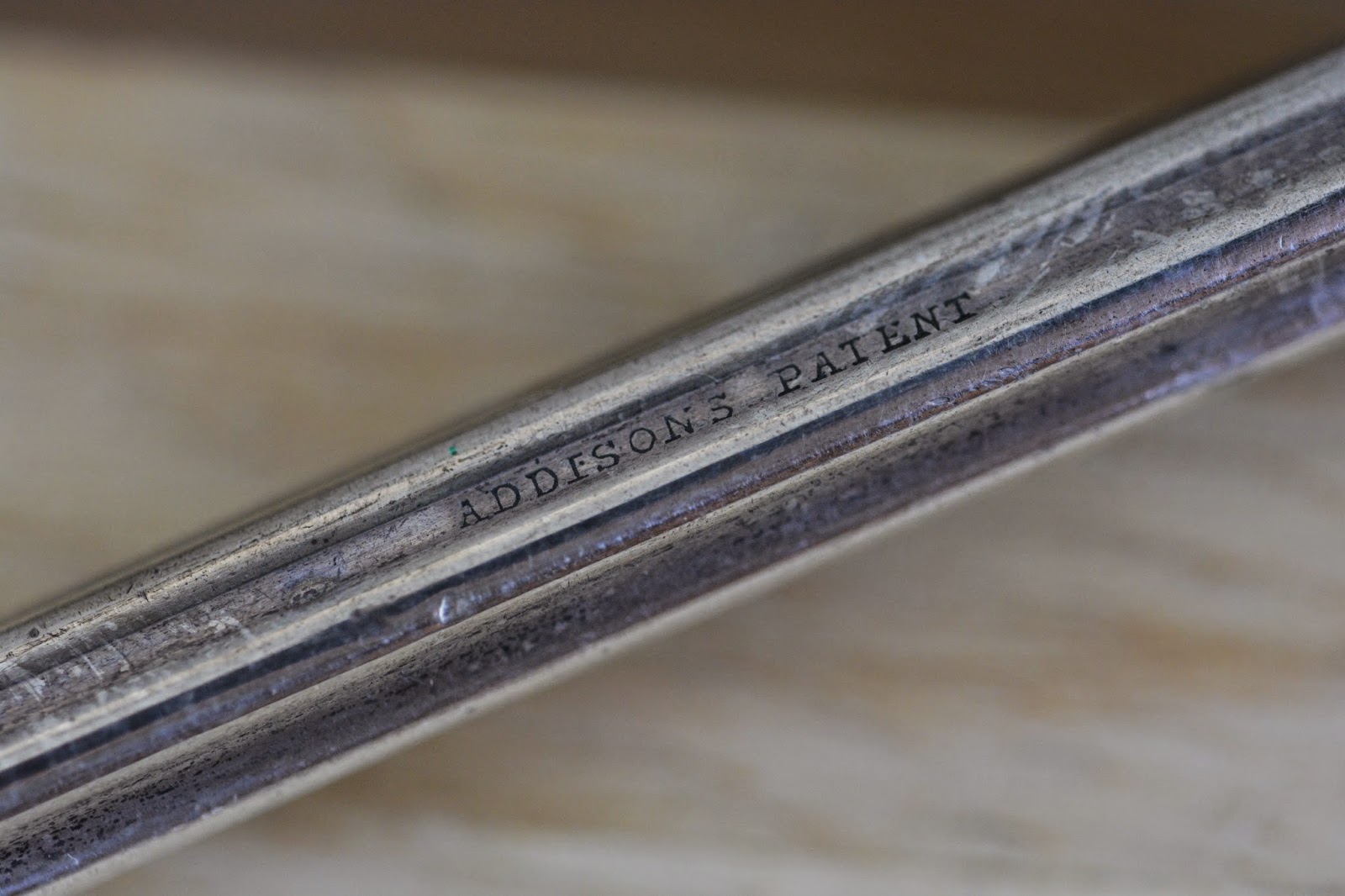 This one has a lapis-like stone set in the crown: 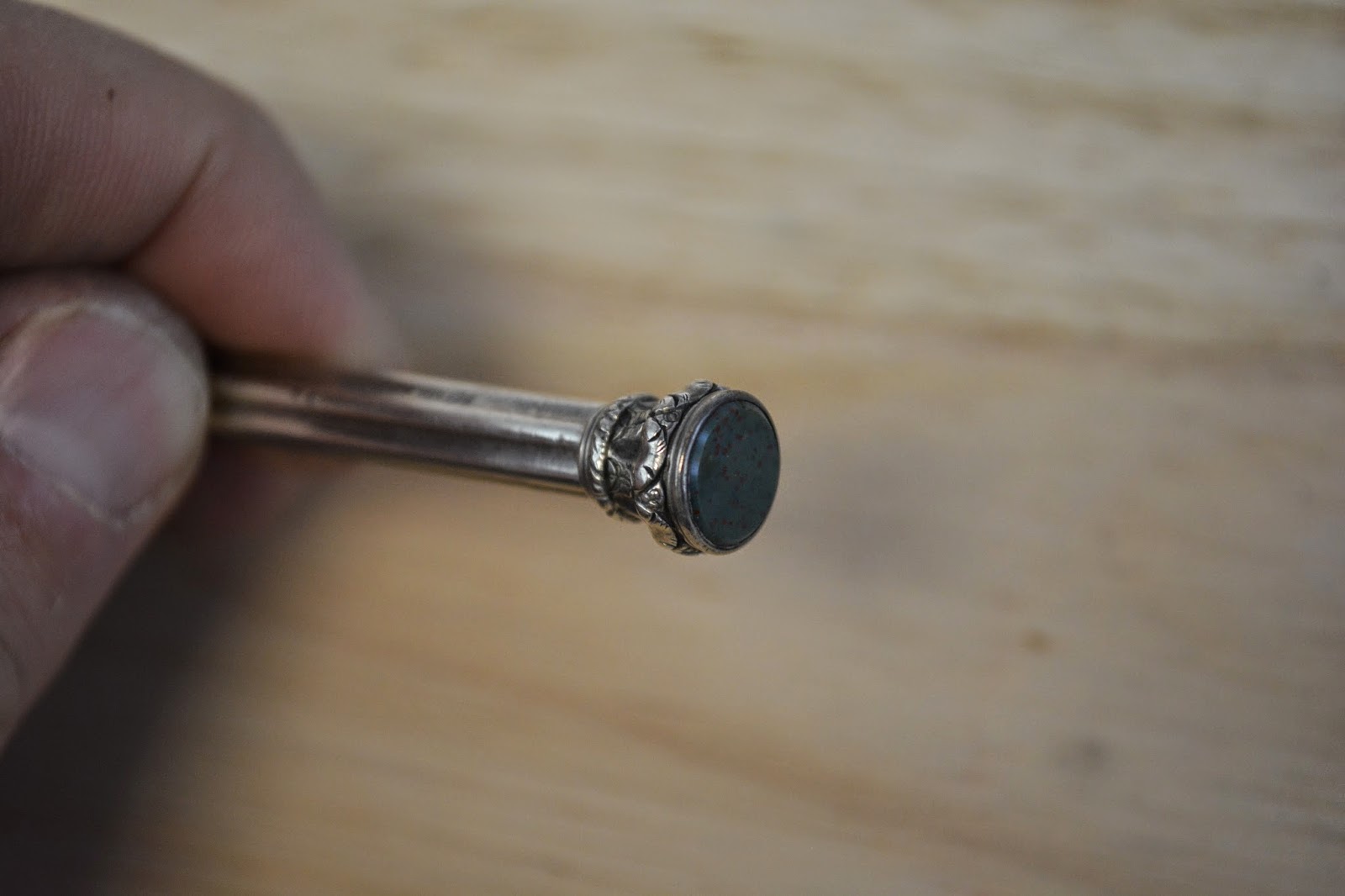 Since then, I’ve managed to find two other Addisons, the most recent one coming from the Philadelphia show – the bottom one in this picture: 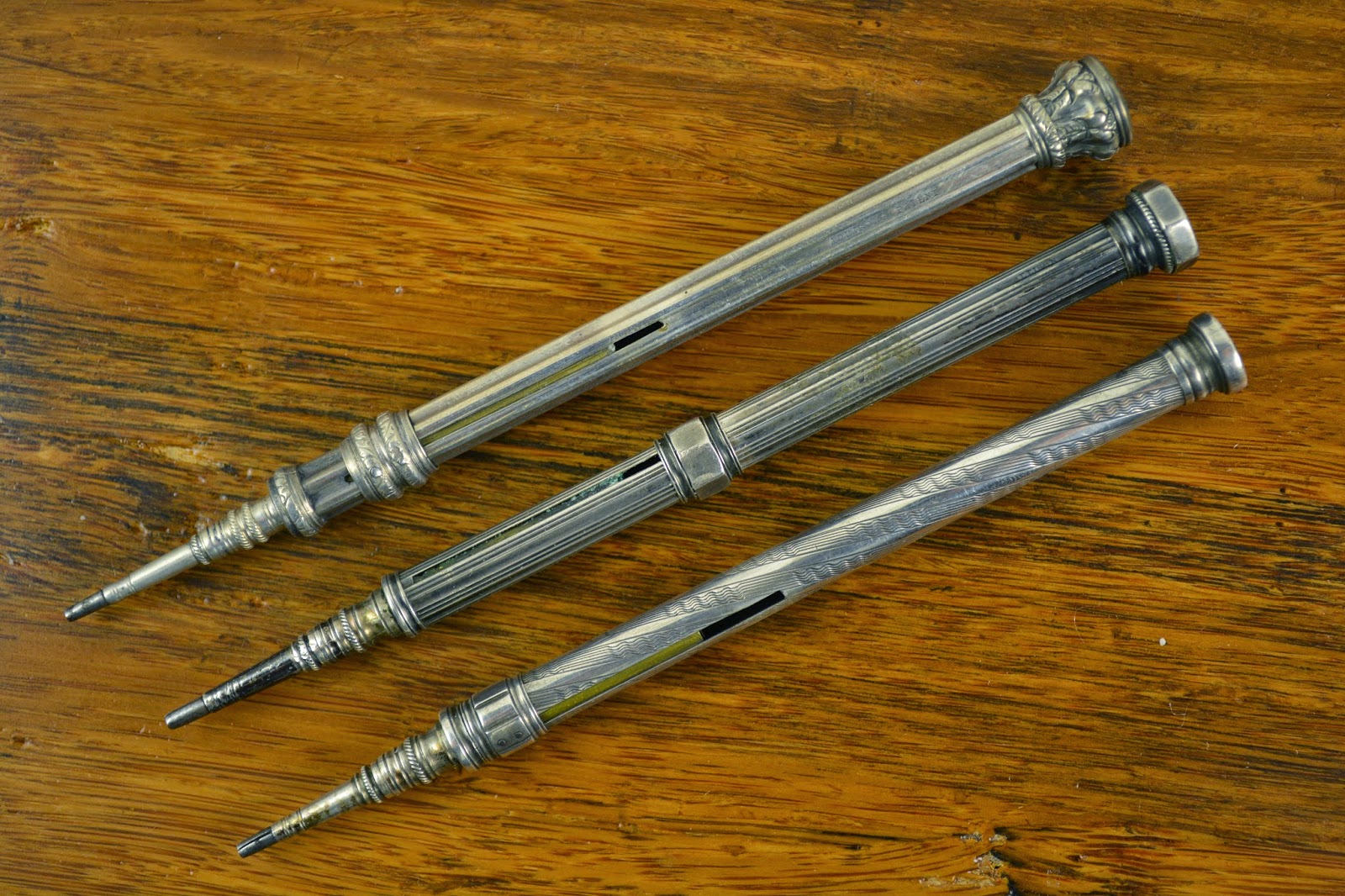 Unlike the "Addison’s Patent" example, these are marked simply "Addison": 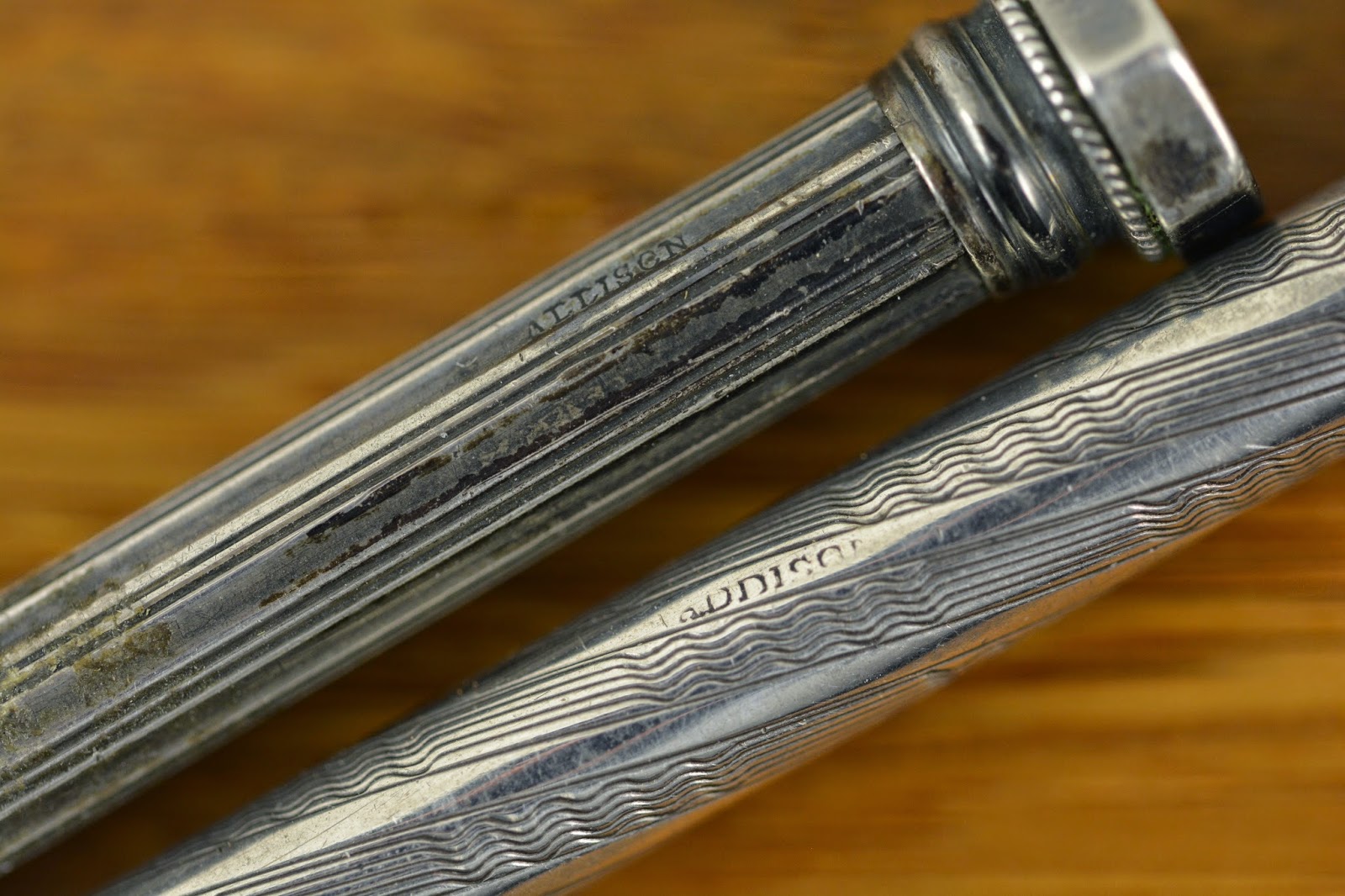 I’m not inclined to think that these were made after the Addison patent expired in 1852 - that seems too late for these. Maybe they predate the patent - that would be exciting, but there’s no way to prove it.

It would be great to find marked examples of pencils made by each of these early manufacturers. Maybe they were unmarked, but maybe there are surviving examples out there - I’ve seen one example of a Lownds (number 7), but no trace of any of the others predating the Addisons. 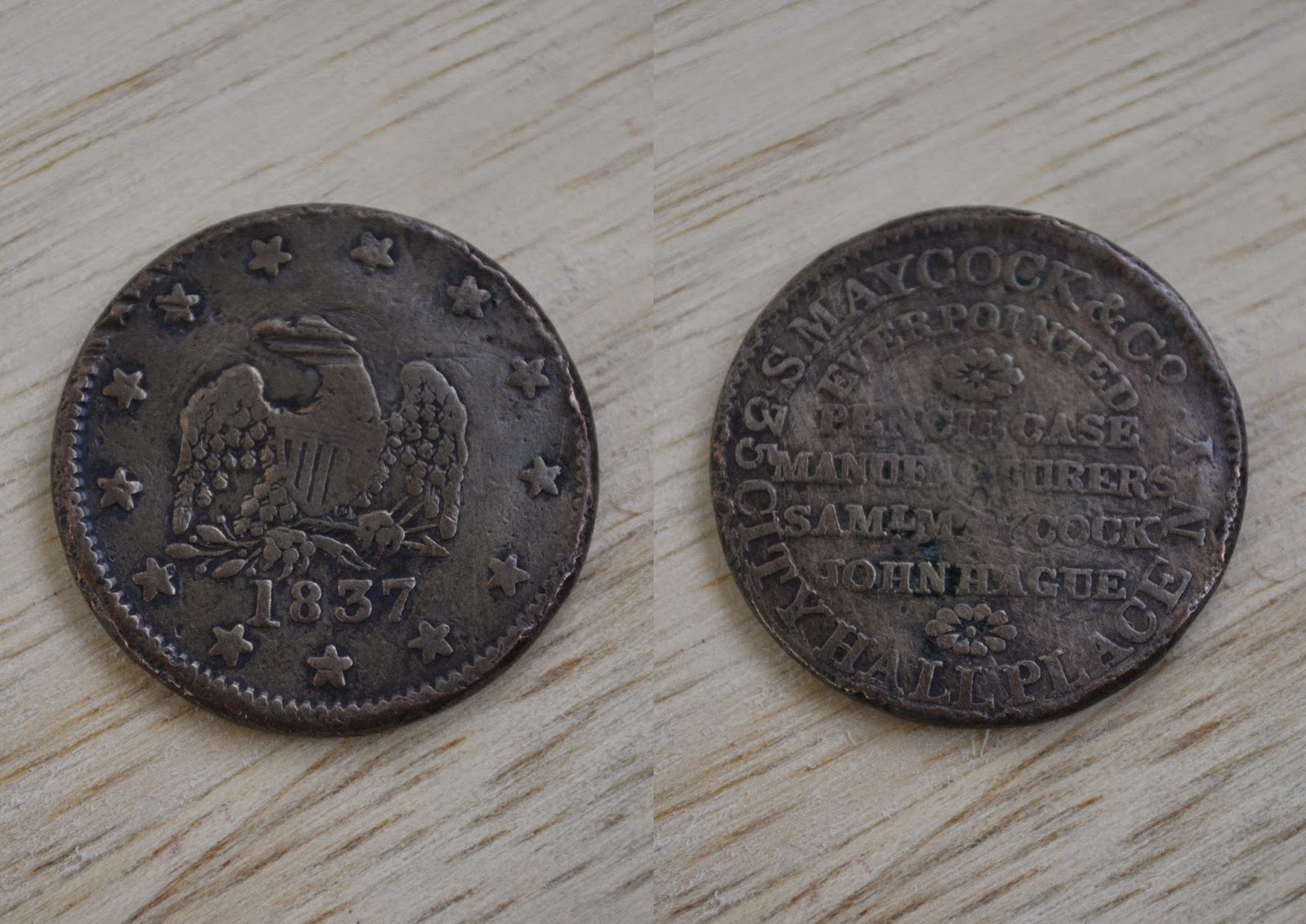 Hague was awarded two patents, the latter of which was issued after this token was minted, in 1839. The former, issued in 1833, was the third pencil patent issued in the U.S., and I think it would be odd if they were unmarked – since Maycock & Co. was minting tokens to advertise them!
Posted by Jon Veley at 3:45 AM

You are correct, David - I went back and rechecked the list of X patents I relied on, and I committed a typographical error.

Hi there! Just happened upon this thread and I just picked up an Addison Mechanical pencil that looks very similar to the ones pictured above. Mine simply says "Addison" on it although the first 'D" in Addison did not stamp all the way through. My email is dbcclu@sbcglobal.net if anyone would like me to shoot a couple photos, I'd be happy to do so. I acquired this pencil at an estate sale this morning and was really looking to get an idea on value. Everything posted here is interesting though and maybe I found something really special. Glad I happened upon the site.