When things wind down on Sundays at the shows, there comes a point at which John Hall and I look around the room, and the atmosphere has changed from pen show to social hour.  At that point, we’d rather have our stuff all packed up in the car so we can take our time going around the room and saying goodbye to all our friends.  It takes a while, since we know just about everyone in the room.

On our last run around the room at Raleigh this year, John got to chatting with someone and I happened to look down at the table next door.  Force of habit, really . . .  I wasn’t expecting to see anything I hadn’t already seen after three days in the same room together.

And yet, there was something there that I’d seen, but hadn’t really noticed: . . and I”d venture to say no one else had, either, because this one should have been snapped up: 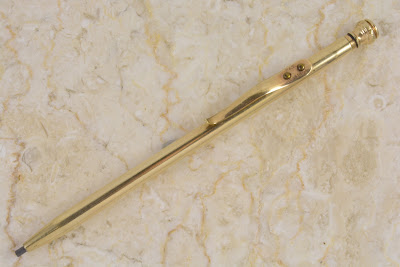 This one sports a disproportionately large clip marked “Pat. Sept. 26 05": 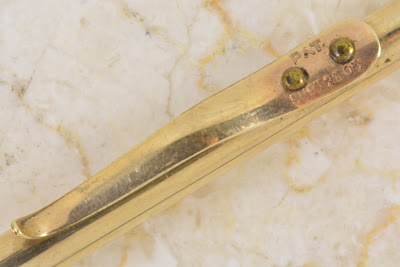 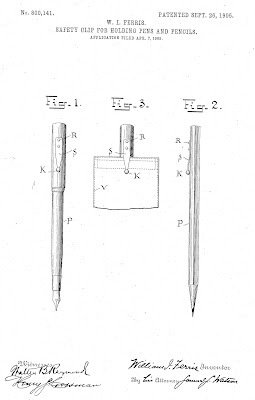 The patent was assigned to the L.E. Waterman Company, and the clip is best known as a Waterman clip.  However, when you see one without that ball on the end, that’s a dead giveaway that on the back side of the barrel, you’re likely to find . . . . 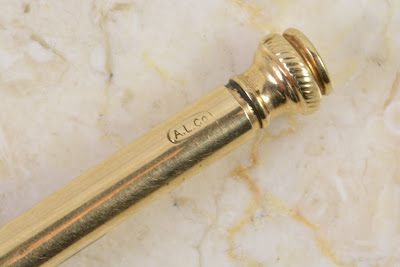 “ALCo,” for Aikin Lambert Company.  Aikin Lambert, which was originally a supplier of gold nibs to Waterman, gradually grew closer and closer to its best customer until it was finally absorbed by Waterman in 1907 (David Nishimura posted an excellent article on the transition of Waterman control over at his blog a few years ago – see http://vintagepensblog.blogspot.com/2012/12/waterman-and-aikin-lambert.html).

This is one of Aikin Lambert’s line of leadholders – a turn of the crown simply releases the lead, which must then be pushed in or dropped out to the desired length.  I’ve got several, including some with plain gold-filled barrels like this one, but what struck me about this example was how disproportionately large that Ferris clip is.  Well actually . . . 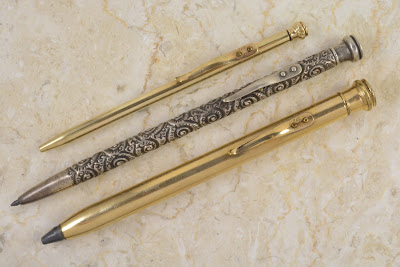 The clip is the same size as what you’d find on any of these.  It’s the rest of the pencil that’s so much smaller than I’m used to seeing!
Posted by Jon Veley at 3:55 AM