A Fist Full of Dollar Pencils 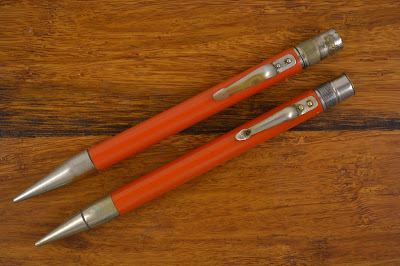 One of these – I don’t remember which – I picked up because I couldn’t remember if I had a red one.  I did, but it still didn’t wind up in my duplicates box, because of a couple subtle differences.  Some of these lack that band around the nose: 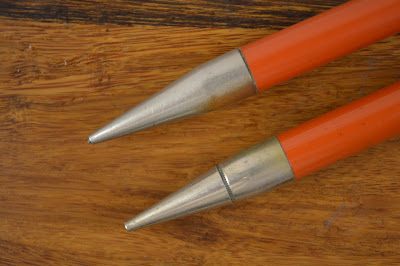 In the case of Parker, a band like that indicates the crimping which holds the outer shell onto the mechanism; in the case of Conklin, apparently that band was purely decorative.  And then there’s a small difference in the tops: 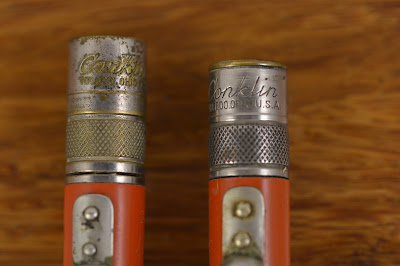 The only catalog in the PCA’s library which shows these pencils is the 1926 edition where it appears only in black, red and light blue . . . 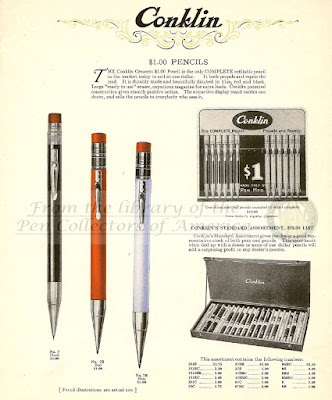 . . . with a band around the nose and the longer top.   So the only documentation out there is for a pencil that matches neither of these.

The next catalog I know of that shows Conklin’s dollar pencils is the 1930-31 edition, also in the PCA’s library, in which the number 6 appears in a tiny picture at the bottom of page 8: 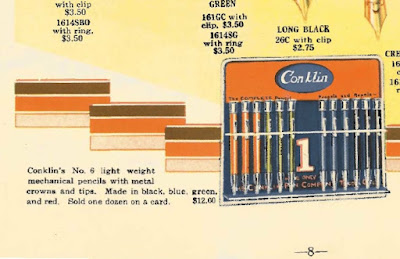 Note that Conklin’s dollar pencils evolved backwards from what you might expect – from a straight ferrule with an exposed eraser to a crown cap more typical of pencils from the early 1920s.  I’ve found a couple of these recently: 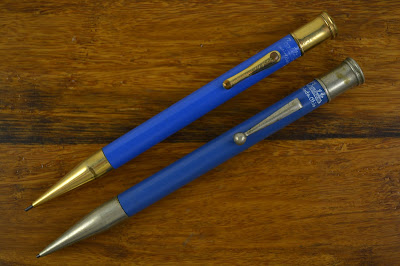 The upper example matches what’s shown in the catalog, with gold-plated trim (not very well plated, in fact) and the Mooney 1918 patent clip.  The other, however, has cheaper steel trim and a very un-Conklin z-clip: 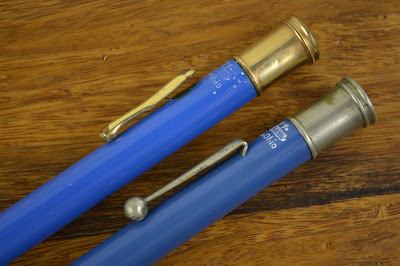 Were it not for the imprint, I wouldn’t have guessed this other one was a Conklin, and since the development of this line has already proven counterintuitive, I wouldn’t hazard a guess as to which came first – or even whether they were offered at the same time.  The steel trim example isn’t working very well, due to wear on the internal parts; that’s unfortunate, but it does provide an opportunity to show you what’s inside: 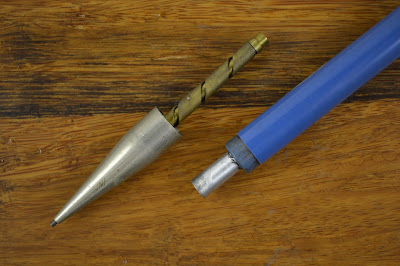 Had soft aluminum not been used for the barrel liner, this would be a pretty elegant nose-drive mechanism. 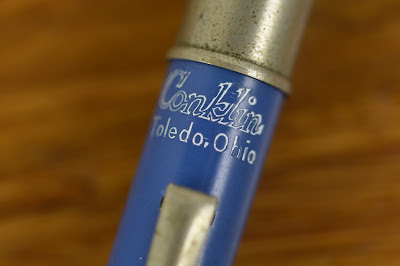 Email ThisBlogThis!Share to TwitterShare to FacebookShare to Pinterest
Labels: Conklin