Note: this is the second installment in a series of articles which started yesterday.  To start from the beginning, see http://leadheadpencils.blogspot.com/2015/06/nailed-it-pretty-much.html.

The E-Z Rite / S&K set that I showed you yesterday wasn’t the first time I bought a set thinking I might have found that last piece of the puzzle.  Several months ago a similar set turned up in an online auction: 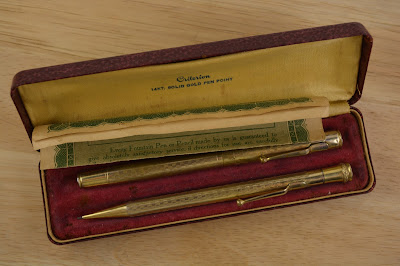 I’m showing it here exactly as it was posed in the pictures online, with “Criterion” in the lid, a pencil that looked just like an Eclipse “Never Dull” and just enough of the paperwork showing to provide the tantalizing words “made by us” on a certificate that looked almost exactly like what you’d find on something made by Rex.

Alas, there were no markings on either the pen or the pencil.  None.  Nada.  As much as this pencil looked exactly like what I was looking for, there wasn’t any evidence conclusive enough for me to even say these were in the right box.  And the paperwork?  Talk about infuriating: 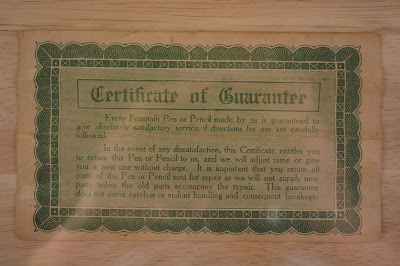 It’s a guarantee, entitling the bearer to return for repair any pen or pencil “made by us,” but there’s no indication who “us” was.  If that bugs me ninety years later, imagine how much it bugged a customer with a repair issue when this set was new! 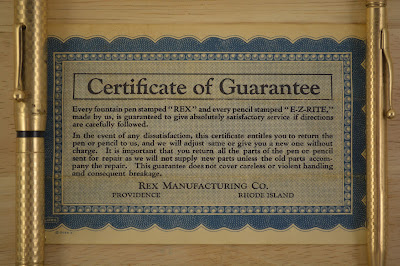 Exactly the same language.  Only the words “marked Rex” and “marked E-Z Rite” are added.  The generic certificate found with my Criterion set is probably what was intended to accompany Rex-made sets made to order for retailers, including the S&K set from yesterday’s article.  What a happy accident it was that they threw the wrong certificate in the box!

There was something else about the Criterion which I’ve suspected, but I thought it was a little too speculative to post about until now.  Now that all this is coming together, I think I’ll speculate tomorrow.

jNote: The story continues at http://leadheadpencils.blogspot.com/2015/07/two-cans-of-worms.html.
Posted by Jon Veley at 2:43 AM