To Make Tolerable This Existence

This article has been edited and included in The Leadhead's Pencil Blog Volume 6, now on sale at The Legendary Lead Company:
https://www.legendaryleadcompany.com/store/p206/Leadheads_Pencil_Blog_Volume_6.html 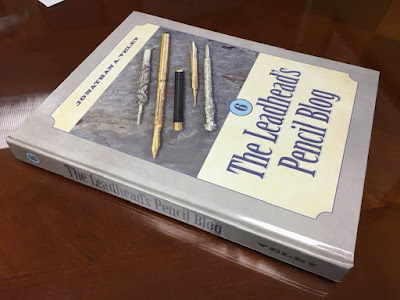 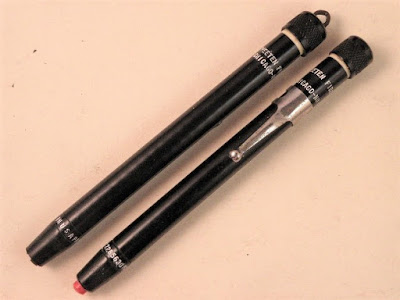 I’ve revisited my old friend Oscar a few times over the years, including the time I wrote about a curious unmarked example of what looked like a Tweeten, but marked “Taylor Made Pencil Co.” on the accommodation clip (Volume 3, page 15). 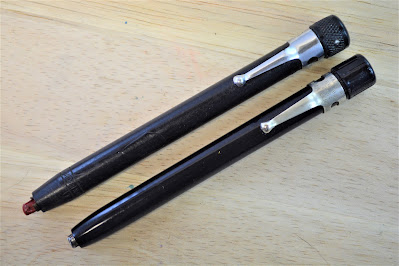 The connection between Tweeten and Taylor Made remained unclear, until a chance online find brought a box of Tweeten leads to my doorstep, confirming that at some point – maybe before, maybe after, maybe the whole time – the Taylor Made Pencil Company in South Bend, Indiana made Tweeten’s pencils: 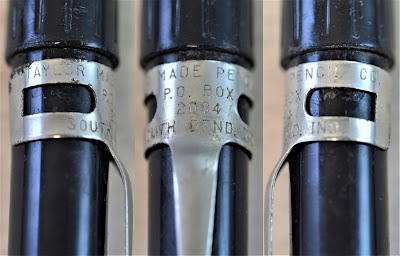 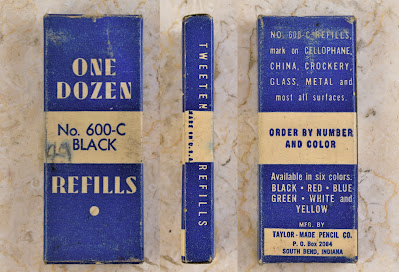 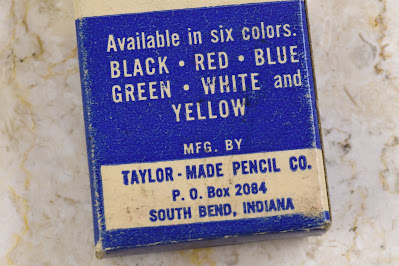 Jim Stauffer, who collaborated with me on A Century of Autopoint, has recently taken an interest in these, dragged into liking them gradually . . . first by noting that the tips on Listo pencils are very similar to those seen on Autopoints and Realites.  This in turn led to a fascination with Listo’s marking/grease pencils, which led to an all-consuming interest in things along these lines.  I’m not the only one who gets caught in such quagmires.
While Jim was researching a fine article he recently posted at his website, vintageautopoint.com  ("Other Grease Pencils"), he stumbled across the articles I’ve posted here.  After Jim finished his article, he asked me for my comments and mentioned that there was a blue Tweeten currently listed by a friend of his in an online auction.
Ooooo . . . a blue one . . . and the same seller also had a red one . . . and some boxes of red and blue leads for them . . . my enthusiasm was transparent and immediate, but Jim cautioned me that the blue example had some heat damage caused when the seller tried to take it apart.
I read the auction description, the damage was properly noted, and I still didn’t care.  I bid on all the Tweeten listings except the red one, because I wanted to check the museum to see if I already had one.  Then, of course, I forgot to go back and bid on it.
I won the blue pencil and one of the boxes of black leads, but I was outbid on the red leads.  That surprised me – someone else must have known how hard those are to find!  Oh well, I thought . . . they didn’t just make one box.  I’ll catch the next bus when it rolls by, and I’ll buy a more expensive ticket when it does.
A few days later, the package containing my blue Tweeten arrived, along with a flurry of other little packages that drew an eye roll from Janet.  When I opened it . . . 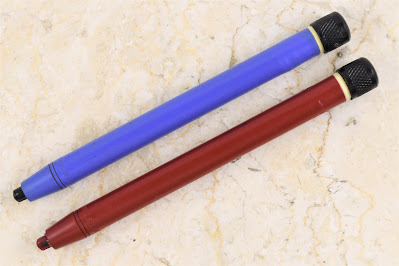 Since I’m not the sort to rejoice in the receipt of an illicit bonus, I rechecked my purchase history to verify I didn’t forget that I forgot to bid.  No red Tweeten was expected, so I sent the seller a message to let him or her know that I had received someone else’s pencil.  All I needed was the seller’s mailing address – I had been in such a rush to clear the kitchen table of that day’s arrivals that I had hastily disposed of the incriminating packaging before domestic eyes rolled once again. The trash man had come and gone, taking this envelope with him.
The seller, Dr. Ibrahim Abousaad, is an Associate Professor of Economics at Lone Star College in Houston.  No, he replied, he meant to send the red one as a thank you for my hard work at the blog all these years, and he had included a nice note to that effect with the pencils.
I beat myself up a bit that I’d thrown it out, because I’ve saved all those little notes I’ve received over the years.  No worries, he said, adding that he was refunding what I paid for the leads and added a bonus to that second shipment, which arrived a day or so later: 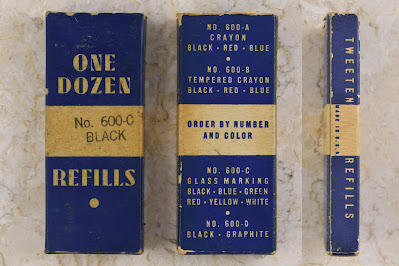 Although I don’t bowl and this is more of Oscar’s leads than I’ll consume in a lifetime, two boxes of these in my collection is in fact twice as good as one!  Ibrahim and Jim might have talked, and because of that glue that binds the two of them together, maybe a little bit of it stuck to me.  Then Ibrahim went just a little bit out of his way, making a bit of new glue to bind us together.
I have no idea what Ibrahim thinks about the economic effects of this pandemic or whether we have chosen a wise course to deal with it in this country.  I don’t know what he thinks about guns, or Black Lives Matter, or how we have evolved from two genders to twenty six or so.  I don’t see the need to bring it up.  But if these or any other topic comes up between us, whether over scotch and cigars at a pen show or in a fiery online debate, I know that if we ever have such a discussion, we will speak to each other with respect.
Yes, Virginia, it is possible to connect with your fellow man, regardless of how many miles and how many viruses may separate you.
Yes, Virginia, you can disagree with others peacefully, as long as you see human beings as equals rather than obstacles to making what you believe will be a better world.
Yes, Virginia, on this July 4th we can and we must find ways like this to hold our country together, one person at a time.
This blog has been my chosen medium to do that.  The pencils matter, at least to me, but what matters more is manufacturing the glue within our tiny circle of enthusiasts to bond us, one to another, where it might not otherwise exist.  If everyone went a little out of their way to find something – anything – to remind each other that we are all we, rather than us and them, our world will right itself.
I neglected many other projects to research and write this series of articles, and I think it is time to turn my attention back to them.  Now that A Century of Autopoint has won an independent book award, some of my non-pencil projects are rapidly moving to the front burner.  When I feel the need I may come back to post other articles here, but I hope that urge will come primarily from whatever goofy pencil has moved me to do so, with building community as an incidental yet invaluable bonus.
I am uncertain, as we all are, what 2020 and the years beyond it will bring.  Maybe this stupid virus will come knocking on my door, and maybe that will be the end of me.  Perhaps we will be plunged into a civil war and I, along with many of my friends on either side, will be claimed as casualties.
I hope not.  But should these be my last words here, I want the message to reflect that I have in some small way done what I could to prevent it.
And yes, Virginia, I still believe we can.
Posted by Jon Veley at 4:35 AM

A beautiful and wise posting, Jon; thank you.

I started a bit when you mentioned Morgan Shipman, a name I hadn't heard for many decades. Shipman's first teaching position was at Harvard, and while I never met him--he had left just before I arrived--my roommate, a third-year student, had taken a course with him previously and mentioned that he had liked him a lot. I gather there was some kerfuffle about the circs of his leaving, of which I never learned the details.

Thank you, Vance. It is a small world, isn't it? I never heard what happened to Morgan at Harvard, but he was very comfortable at Ohio State -

This is an excellent, thought provoking article presented here- I’m glad I can identify myself as a ‘Lead-Head’.
I had never read ‘Virginia’s Letter’ or known of the reply, but every time I read your writings I learn something new.
I came across a ‘Ribbed Grip-Tight’ Autopoint marked- 48G-1.25 complete with its box, instruction leaflet and several leads still inside underneath the eraser that’s neatly covered by the rear cap.
Because I’m fortunate to own your Century of Autopoint (#20) I was amazed to see its like the ones that Susan Wirth shared with you.
Maybe by November, the Pandemic will have subsided and I’ll see you again in Ohio at the Pen Show!
Thanks for your excellent articles!

Thank you very much for your nice words. I doubt that we would share different thoughts about the economy and our surroundings these days. We all live in the same stress, and we all wish to go back to the everyday life that we used to have before COVID-19.

Thank you very much for your work, effort, knowledge, and information that you shared with the world through your blog and your publications. You deserve much greater recognition for these contributions.

Jim has taught me a lot about Autopoint, Realite, and all kinds of "grease" pencils and leads. I am very appreciative of Jim's sharing and teaching.

Doug also taught me a lot through eBay, and the most significant lesson that Doug taught me is to stop messing with my valuable pencils, but sometimes I cannot just wait to fix many pencils, in which I end up messing them up.

I use eBay as a platform to share my items, and I charge a ridiculously high price, so they do not get sold, such as the case with the red Tweeten. I benefit from the knowledge that I receive from the collectors who keep correcting me. This is actually how I knew Jim and Doug.

I am thinking of having a different platform, such as my website, to post articles and photos of some items I have.

I do not consider myself a genuine collector because of the limited time I have to collect and because I have more responsibilities toward my family. They dislike me spending too much on eBay & Etsy!

Again, thank you very much for your sweet words.