At the Chicago Pen Show this year, a friend asked an odd question of a pencil collector: would I be interested in a large collection of Victorian dip pens?   I told him I didn’t know enough about them to formulate an intelligent offer, but he said he was selling the bunch for a friend and he asked if I would just look through them while he browsed around the show.

What the heck, I thought.  I was in a room full of people that could offer me a bit of guidance, and maybe I’ll learn something.

One of the brains I picked was that of David Nishimura – who lent me his advice and also some comfort.  When my friend swung by again, I made the offer David suggested, negotiations were swift and the next time David came by, I offered him the pick of the litter in case there was something in the bunch he couldn’t live without.

You can usually spot David at shows by the turquoise piece of headgear he wears, with built-in magnifiers, and you know when he’s serious because he swings it into place and you’re looking at the top of his head for a while.  Down the lens swiveled as he started pulling things out of bags one by one, meticulously examining every detail.  At one point he handed one of the few pencils in the group to me.  “You’ll want to keep this,” he said without looking up: 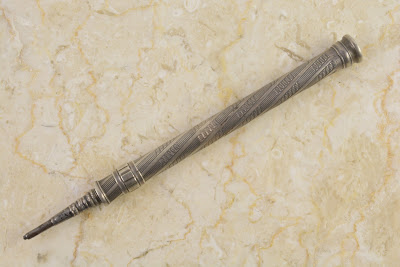 I’d noticed this one in the lot, but I didn’t think much of a “Woodwards & Hale” since I still try to limit myself to American pencils. 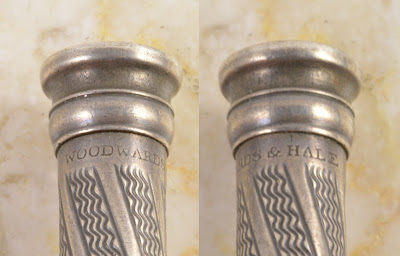 “No,” the top of David’s head said without missing a beat as he continued to browse through the next items in that bag.  “It’s American.  And it’s early.”

It is and it is, of course.  In fact, now that I’ve researched it, I’ve found that it’s probably the earliest piece in my collection.  I’d never seen one, but David obviously has: he sent me a picture of his other examples by the maker to share with you.  Some of these are marked “Woodwards & Hale,” like mine, and others marked simply “Woodward’s Patent”: 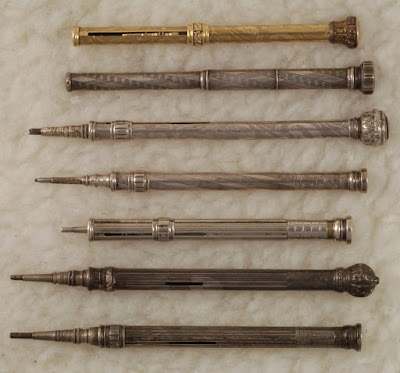 What little history there is concerning Woodwards & Hale might have been lost were it not for the fact that one of the Woodwards, Thomas Jr., had a son who became moderately famous.  John Woodward earned his reputation during the Civil War as a Colonel at Gettysburg, later rising to the rank of General and becoming Inspector General for the State of New York.  In 1897, Elijah R. Kennedy wrote John B. Woodward: A Biographical Memoir -- “for private distribution,” suggesting that the work was more of a vanity project commissioned by the family than the result of Woodward’s rock star status.  While the work is largely a compilation of John Woodward’s letters, it does contain, on pages 5 and 6, passing mention of the Inspector General’s family history.

According to this account, Thomas Woodward, Sr., John’s grandfather, was an established metalworker in England who become increasingly dissatisfied with life (and particularly taxation) in England.  After he emigrated to the United States, he wrote home to the mother country: “Worried, my old neighbors, as you are, by tax-gatherers of all descriptions, from the County Collector, who rides in his coach and four, down to the petty Window Peeper, the little miserable spy who is contstantly on the lookout for you, as if you were thieves; surrounded as you are by this vermin, big and little, you will with difficulty form an idea of the state of America in this respect.  It is a state of such blessings, when compared with the state of things in England, that I despair of being able to make you fully understand what it is.”

Thomas Sr. sent his son Thomas Jr. (John’s father) to the United States in 1818 to see whether life in the former colonies would be more appealing, and in 1819 the entire Woodward family, including all three of his sons, Thomas Jr., Charles and George, arrived in New York.  According to Kennedy’s account, Thomas Jr. became a silversmith “directly after they were settled here,” and formed a partnership with his brothers and “a Mr. Hale” soon afterwards.

Although the dates provided by Kennedy are not specific, a letter to The London Guardian published on December 6, 1823 refers to “George and Thomas Woodward (two worthy Englishmen currently residing in New York)” who the writer encountered on October 27, 1819 – corroborating the Woodwards’ arrival in the former colonies sometime during that year.

Samson Mordan did not receive his patent for the first mechanical pencil until 1822 in England, so if Woodwards & Hale had anything to do with writing instruments early in their partnership, they would have crafted silver holders for cedar pencils.   The earliest reference I have found to the partnership making mechanical pencils was this advertisement, which appeared in The Long-Island Star on January 2, 1833; in the lower right hand corner, note that the advertisement appears to have been composed on June 6, 1832: 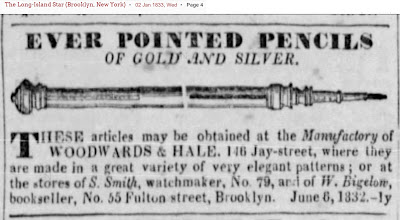 Woodwards & Hale was dissolved by agreement in January, 1839, and published notices of the dissolution, and the continuation of the business by Thomas, Charles and George as Woodward & Brothers at the same location, 146 Jay Street, appeared in the New York Evening Post: 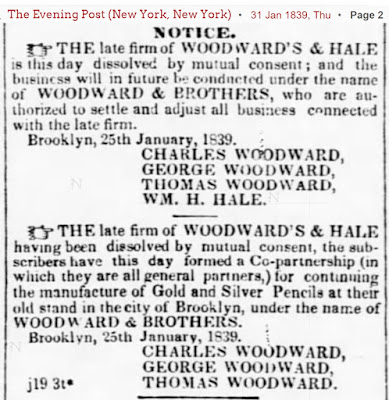 The account contained in Kennedy’s book says that the dissolution was the result of Hale’s retirement, which appears to be corroborated by a notice in The Long-Island Star on June 8, 1840, directing creditors of a deceased William H. Hale to present their claims to his Executor, Peter G. Taylor:

After Hale’s retirement, Thomas Woodward applied for and was granted two of the earliest patents for mechanical pencils, number 1,625, issued on June 10, 1840: and number 1,823 issued on October 14, for a “Security Ever-Pointed Pencil Case” which included a doohickey supposedly making the parts less likely to become unscrewed from the pencil and lost: 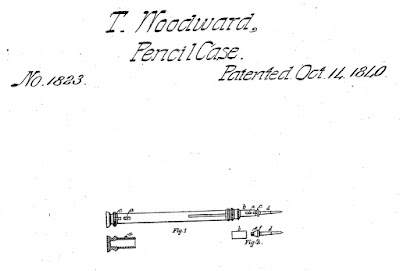 The firm also diversified its operations.  According to Kennedy, its most profitable products in addition to Ever-pointed pencils were a “Diamond Pointed Gold Pen” (that’s nearly eighty years before the Diamond Point we know today) as well as a “Shielded Safety Pin.”  I did find several advertisements running in 1848 for the firm’s gold pens: 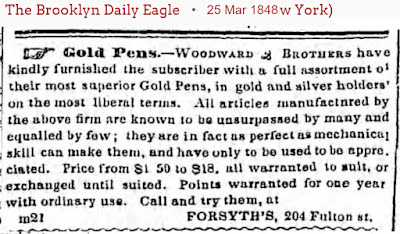 Brooklyn city directories are not as readily available as those for the city of New York, but both the 1843-1844 and 1848-1849 directories list Woodward & Brothers at the 146 Jay Street address: 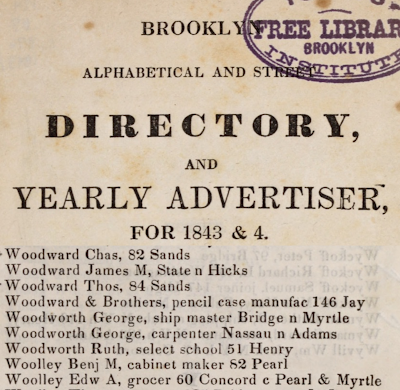 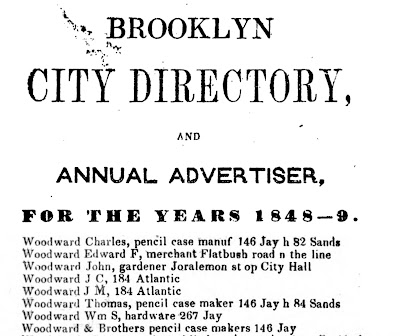 Kennedy says that the Woodwards were in business “for nearly forty years,” but the evidence I’ve found doesn’t support that.  In 1852, Thomas Woodward was elected to the board of directors for the Brooklyn Institute; while the 1853-1854 Brooklyn City Directory still lists Woodward and Brothers and Thomas as a pencilcase manufacturer, there’s no mention of Charles, and George is listed as a “machinist.” 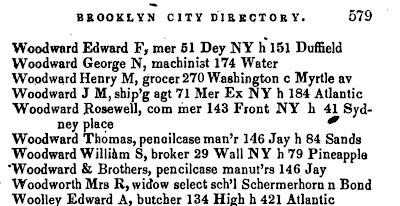 On March 27, 1854, The Brooklyn Daily Eagle contained an auction notice for the property at 144 and 146 Jay Street, “well known as the gold pen and pencil manufactory of Woodward Brothers”: 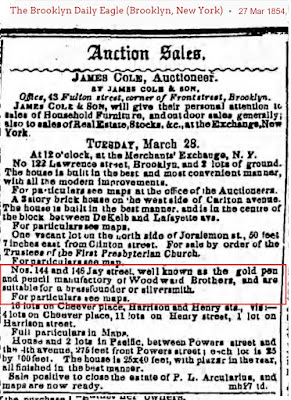 By 1855, Trow’s New York City Directory included the hinterlands of Brooklyn.  John Cann and David Dunn took out a prominent advertisement in the directory that year for their new silversmith shop located at 144/146 Jay Street – but writing instruments were not among their wares:

George and Thomas appear in the 1855 directory, but no longer in the business of making pencils: they are listed as importers under the name of Woodward & Brother (singular) located at 10 Ferry:

Although I never found a death notice for Charles, I believe he passed away sometime in the early 1850s: on March 12, 1867, The Brooklyn Daily Eagle reported the death of Maria Woodward in Brooklyn, who was described as “widow of Charles Woodward, late of Birmingham, England,” and there’s a Mary A. Woodward listed as a “widow” in the 1855 directory.  George died on June 6, 1875 at the age of 84; notice of his passing was published in the Daily Eagle on June 8.

As for Thomas, who the evidence indicates was the Woodward in Woodward & Brothers, the Daily Eagle reported on January 15, 1873 that he had passed away on January 14 at the age of eighty.  A couple weeks later, on February 3, the Brooklyn Institute published a tribute to their former board member and friend: 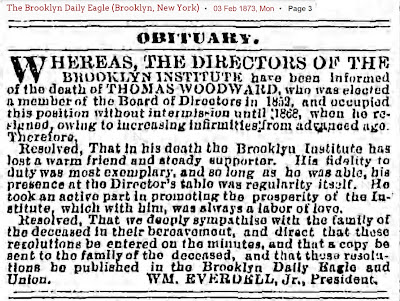 Note:  there's more to the story.  The next installment is published at http://leadheadpencils.blogspot.com/2017/05/woodwards-patent.html)

There was another "Woodward" pencil maker in Birmingham in the late 1800's - Alfred Havilah (A.H.) Woodward that used "Woodward's Patent" on some of his pencils. I have a couple of his pencils; one is marked "Woodward's Patent" and is identical to the design shown in the U.K. & U.S. patents 5224 / 296,302, respectively. The other is simply marked A.H.W. and I.X.L. As yet I haven't found a family connection to the much earlier Woodward pencil makers in the U.S. but given that they also originated from Birmingham I wonder if there was some sort of relationship at some point.

I have GF push button (and twist to retract the mechanism) pencil that I would like some info on. Hallmarked 'WOODWARDS PATENT in full working order although there is no lead. Neil Madle Devon UK. Please reply to sales@bringmeasandwich.com