The Real Story of Redipoint

This article has been edited and included in The Leadhead's Pencil Blog Volume 4; copies are available print on demand through Amazon here, and I offer an ebook version in pdf format at the Legendary Lead Company here.
If you don't want the book but you enjoy this article, please consider supporting the Blog project here.
Brown & Bigelow, the calendar printing company founded in St. Paul, Minnesota in 1894, began dabbling in the mechanical pencil business under the trade name “Redipoint” around 1918, as surviving examples imprinted with dates have established.   In April, 1921, however, the company got serious about its new brand, starting with this trade announcement in Office Appliances: 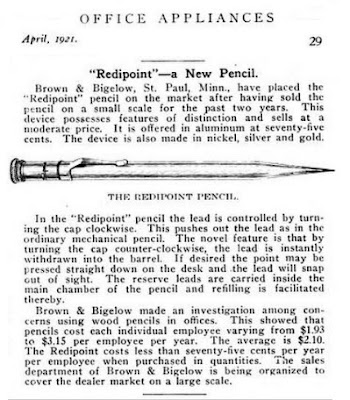 Note that this article indicates that the “new” Redipoints were being “placed on the market after having sold the pencil on a small scale for the past two years.”  Maybe the article has the dates fudged a bit, as I’ve written about marked Redipoints dated 1918; maybe the article is talking about the more conventional screw drive pencils, which became universally adopted and used throughout at least the end of the 1920s.

Through the rest of 1921, B&B advertised their new Redipoints, with the exclusive “Automatic Push Back” mechanism, in traditional metal barrels as well as in lightweight aluminum: 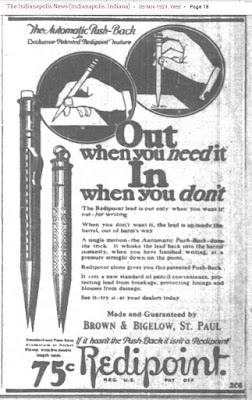 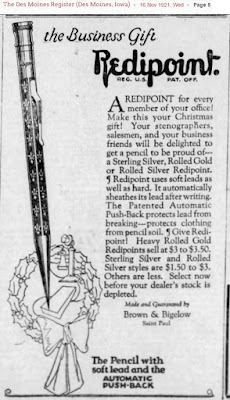 Beginning in March, 1922, advertisements indicated that the pencils are being made by the “Redipoint Pencil Division” of Brown and Bigelow: 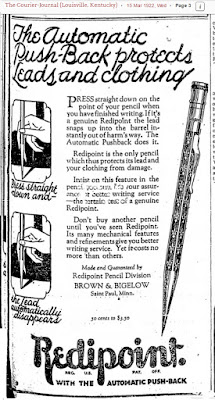 The third Ingersoll, William H. Ingersoll, left for a brief stint as president for the Positype Corporation in New York; however, the June 8, 1922 issue of Printers’ Ink reported that he resigned to set up a new company to manufacture and sell Redipoint pencils, “previously made by the Brown & Bigelow Company, St. Paul.” 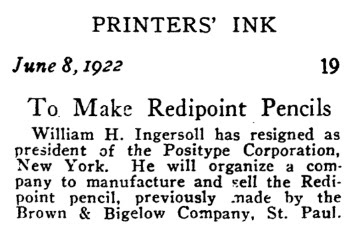 In July, 1922, Office Appliances reported the incorporation of the Ingersoll Redipoint Company, with capital stock of $1,500,000:

By September, 1922, the Ingersoll Redipoint Company, located at 461 Fourth Avenue, New York, had assumed at least the distribution of Redipoint pencils, as reported in Office Appliances: 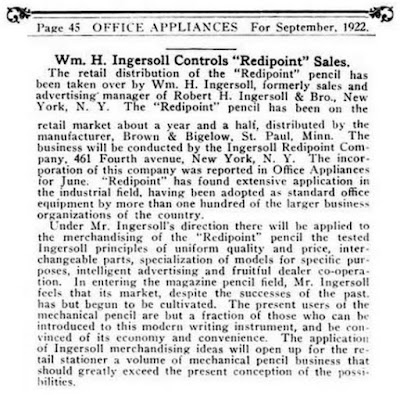 William Ingersoll went into the business “whole hog,” as we say around here (I’m not sure whether that’s just an Ohio thing).  He placed a full page advertisement in the following month’s issue: 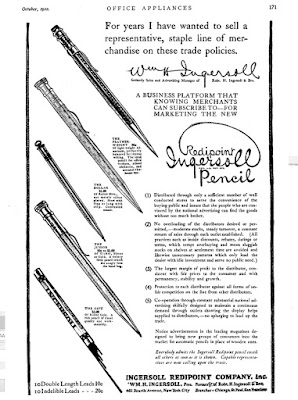 And also placed a trade announcement:

Ingersoll Redipoint advertised heavily.  While the new company continued many of the lines Brown and Bigelow had advertised prior to the sale, William had his own vision of Redipoint as  more of a luxury writing instrument brand: under his leadership, fancier gold filled and sterling pencils appear, as well as all-metal pens to match with nibs marked with a stylized “WHI” logo.

By 1924, Ingersoll Redipoint had made its own name, and Brown & Bigelow had comfortably settled back into the printing business.  I have no evidence that Brown & Bigelow was engaged in any business other than printed advertising specialties, when the press reported a bombshell: 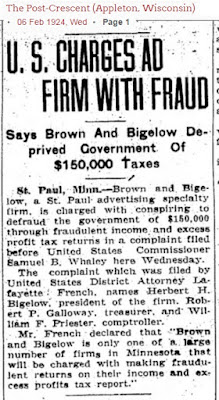 In February, 1924, United States Attorney Lafayette French filed suit alleging that Brown & Bigelow had prepared a fraudulent income tax return which shorted the Federal Government by approximately $150,000.00 in taxes, naming all of the officers of the company including its president, Herbert H. Bigelow.   Note French’s statement at the end of the article: “Brown and Bigelow is only one of a large number of firms in Minnesota that will be charged with making fraudulent returns on their income and excess profits tax report.”

Apparently, fraudulent returns in Minnesota were so rampant that the authorities believed the most expeditious way to put a stop to it was to make an example of someone.  The case against Bigelow went to the grand jury in May, 1924: 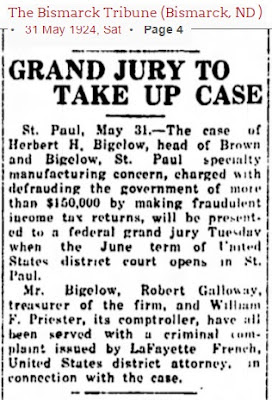 I haven’t found any reports in the press that indicate whether Bigelow was tried or whether he pled guilty; what we do know is that justice moved at lightning speed, and Bigelow was convicted and sentenced to two years in prison.  He began serving his sentence at Leavenworth, Kansas in August, 1924.

For many, such a fall from grace would mark the end of one’s career, but Herbert H. Bigelow was an extraordinary man.  He was assigned to work in the electrical shop, in which another inmate, Charles Ward, was the inmate supervisor.  Bigelow and Ward, who was serving a one-year narcotics-related conviction, became fast friends, and Bigelow – who continued to run Brown and Bigelow in his spare time from his cell – immediately began the road to redemption.  The grace with which he was serving his sentence made national news with this human interest feature published two short months after Bigelow entered Leavenworth, in November, 1924: 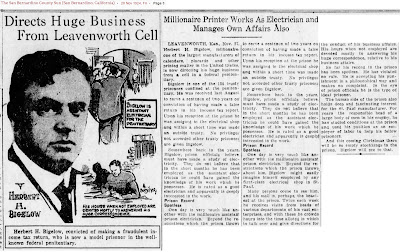 Bigelow made his reputation as “Santa Claus” in December when he caused Christmas candy to be distributed to all of his inmates.  His conduct was so exemplary that he was released in April, 1925, after serving just eight months of his sentence:

Prison was a life-changing experience for Herbert H. Bigelow, but not in ways one might imagine.  He donated 500 books to the prison’s library in an effort to further education among inmates, and he became committed to providing job opportunities to former inmates released from prison, starting with his inmate supervisor Charles Ward, who he hired and made general manager of Brown & Bigelow.

Another of Bigelow’s first actions when he was released from prison was to negotiate the reacquisition of the Redipoint writing instruments brand.  This advertisement, which ran in the Chicago Tribune on January 31, 1926, indicates that the reacquisition took the form of a merger between Ingersoll Redipoint Pencil Company and Brown & Bigelow, effective on February 1, 1926: 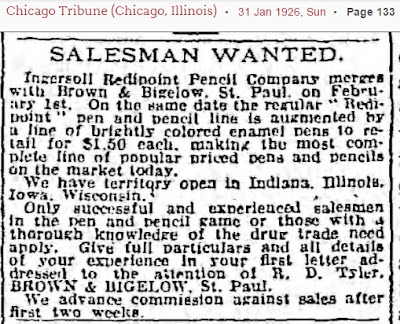 Why did Brown & Bigelow reacquire the brand?  Given this timeline, I think Bigelow’s legal troubles arose from how he reported the sale of his “Redipoint Pencil Division” to William H. Ingersoll in 1922; that return would have been filed in April 1923, and if reviewed and questioned promptly could well have resulted in charges being filed in 1924.  Perhaps the simplest way to unwind the financial damage was to unwind the entire transaction.  Perhaps Bigelow was looking for ways to provide jobs to more former inmates, and thought buying back the Redipoint line might provide just the right opportunity.

Then again, perhaps William Ingersoll felt the brand’s reputation was tarnished by the whole affair, so he either persuaded, threatened or simply asked Bigelow to buy it back.

Once the merger was over, Ingersoll’s name was removed from the Redipoint line (score one point for the tarnished reputation theory), as indicated by this advertisement from 1927: 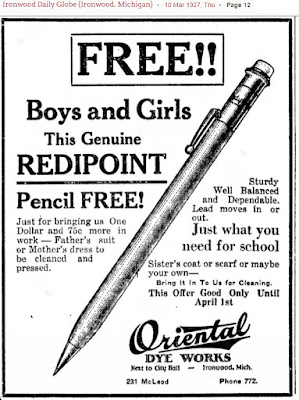 By Christmas of 1928, Ingersoll Redipoints were being blown out at discounted prices: 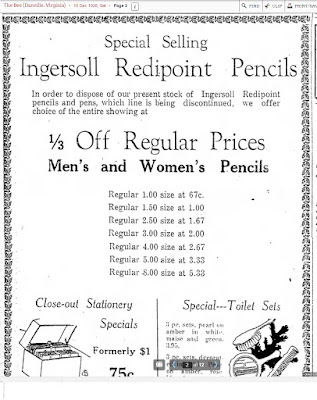 If our story ended here, it would be a happy ending, of a millionaire businessman who made a mistake, paid the price, made the most of the experience and lived happily ever after.  Unfortunately, it was not to be.  On September 18, 1933, Bigelow went on a 10-day canoe trip; during a storm on Basswood Lake, near Ely, Minnesota, the canoe in which he, his guide and “an unidentified woman” were traveling sank.  Bigelow was reported as having drowned: 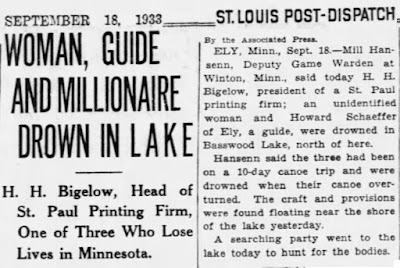 There are a few oddities about this report, starting with the fact that although belongings from the craft were found floating downstream, the press immediately reported all three members of the party drowned rather than missing, and the search was on “to hunt for the bodies.”  Shortly after the initial report, the woman was identified as Mrs. Ralph J. Mather, a prominent St. Paul socialite who was thirty years’ Bigelow’s junior: 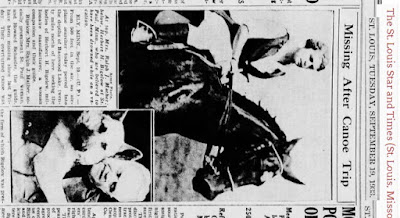 If this were a large tour with several canoes, that might explain what Bigelow was doing canoeing around for ten days with a prominent married woman and the early accounts which indicated they were drowned rather than missing; however, it fails to explain why the prominent Mrs. Mather’s identity was unknown.

Bigelow and Mather’s bodies were found two days after the incident, in sixty feet of water.  Their guide, Howard Schaeffer, wasn’t found until September 27.

Upon Bigelow’s death, Charles Ward was made president of Brown & Bigelow, and two years later, President Roosevelt directed that Ward be restored to citizenship: 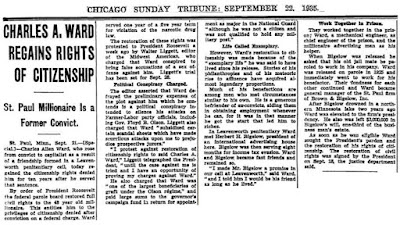 Ward’s past continued to haunt him, and in 1952 it appeared he might be the second president of Brown & Bigelow to go to prison over tax issues.  Joseph D. Nunan, who served as commissioner of the Internal Revenue Service, had resigned his position effective June 30, 1947; within six month, Charles Ward paid him a $25,000.00 “stock fee” to expedite a ruling currently pending before the IRS.  Brown & Bigelow’s lawyer was a close personal friend of former Commissioner Nunan, who was in private practice at the time the payment was made. 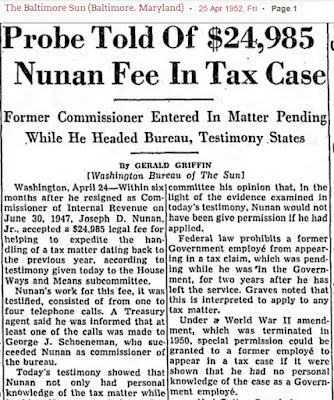 Ward was cleared of wrongdoing for what he called the “stiff fee” he was charged, but Nunan was questioned before Congress and many of Brown & Bigelow’s dealings with him were brought into question – and Ward’s checkered past was too irresistible for the press to leave out.  Nevertheless, Ward weathered the storm and continued to serve as president of Brown & Bigelow until his death.  He died just before his 73rd birthday while on a business trip to Los Angeles, on May 25, 1959. 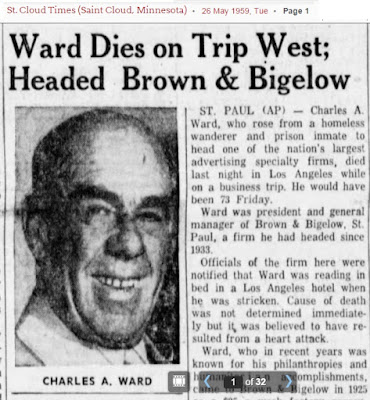 This makes no mention of the fountain pens. I have 2 redipoint ring top fountain pens, both with an excellent #2 flex nib in 14kt gold marked 'St. Paul'.

Both are screw top with a screw out section. Apx 4 inches long closed.

I would appreciate any information that you could provide. I am currently trying to fully restore both pens, but the lack of information is vexing. I purchased both pens from Ebay estate sales and have been unable to find any other info except for your article.

If you wish I have some photos of the pens available, but I am not a photographer so the quality is not the best. If you would like them please email me.

I thank you for your time and consideration.